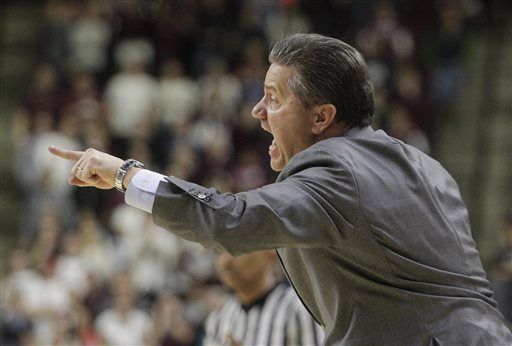 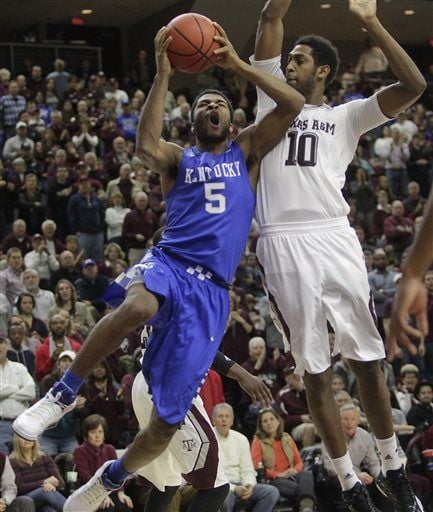 But surprisingly, that's OK with the veteran coach.

"I don't want us to be great right now anyway," he said. "We need to be great at the end of February and March ... you win and you learn. It's winning and learning and that's all we're trying to do."

Tyler Ulis put Kentucky ahead with a 3-pointer deep in double overtime to help hold off Texas A&M for the 70-64 win.

The game was tied at 63 when Ulis hit the shot with 1:26 left for his first points of the game.

Kentucky (15-0, 2-0 SEC) was coming off an overtime win against Mississippi on Tuesday.

"These kids are not machines," Calipari said. "They make mistakes. They do dumb things, but I've got a good group that has a will to win."

The Aggies rallied in the final minutes to tie it in regulation. Trey Lyles made two foul shots with six seconds left in the first overtime for Kentucky, and Texas A&M took its time before missing a long 3 at the buzzer.

Johnson wasn't surprised that A&M gave them such a fight.

"We know that this is every team's Super Bowl and everybody is going to give us their best shot," he said.

Devin Booker led Kentucky with 18 points, Aaron Harrison had 12 and Andrew Harrison had nine. Three players fouled out for Kentucky and one for the Aggies.

Kentucky trailed by as many as 11 in the first half before a big run just before halftime and at the beginning of the second half put the Wildcats on top.

The Aggies didn't score a basket in the first overtime, but made four of six free throws to stay in it. The Wildcats got a bucket from Booker and missed three free throws before Lyles' tying foul shots.

"I'm crushed that we didn't win ... but I'm proud of the way we competed and gave ourselves a chance to win," Texas A&M coach Billy Kennedy said.

House made a pair of free throws to tie it with 18.4 seconds left in regulation. The Wildcats had a chance to win it in regulation, but a long 3-pointer by Aaron Harrison bounced off the rim.

The Aggies used a 5-2 run to cut the lead to 53-51 with 1 1/2 minutes left. They got the ball back and missed three shots on one possession before Kentucky grabbed a rebound and Andrew Harrison's layup on the other end rolled in and out of the basket before the free throws by House.

Texas A&M scored five straight points, with two layups by House, to get within 48-46 with five minutes left. But Aaron Harrison sunk a 3 to extend Kentucky's lead to 5.

The Aggies played without leading scorer Jalen Jones (12.1 points a game) who missed his second straight game with a sprained ankle.

Booker scored five straight points for the Wildcats before Alex Robinson made A&M's first field goal in 6 1/2 minutes on a layup about a minute later to cut the lead to 39-35.

The Wildcats scored the first four points of the second half to cap a 12-0 run that started before halftime and take their first lead of the game 29-28.

Texas A&M jumped out to a 9-0 lead as Kentucky missed its first seven shots thanks in part to two blocks. The Wildcats finally got on the board on a 3-pointer by Booker with 14:40 left in the first half.

Kentucky: The Harrison twins are from Richmond, Texas, which is about 95 miles from College Station. ... There was a large contingent of Kentucky fans at the game that loudly chanted: 'Go Big Blue!' each time A&M attempted free throws.

Calipari said that Andrew Harrison struggled on Saturday after hurting his hip in practice on Friday. The coach said he was injured when he crashed into Johnson, but didn't provide any details on how serious the problem was.

DON'T BET ON IT

After Kentucky made it through its tough non-conference schedule unscathed many analysts predicted that the team would run the table in the SEC. Kennedy isn't so sure about that.