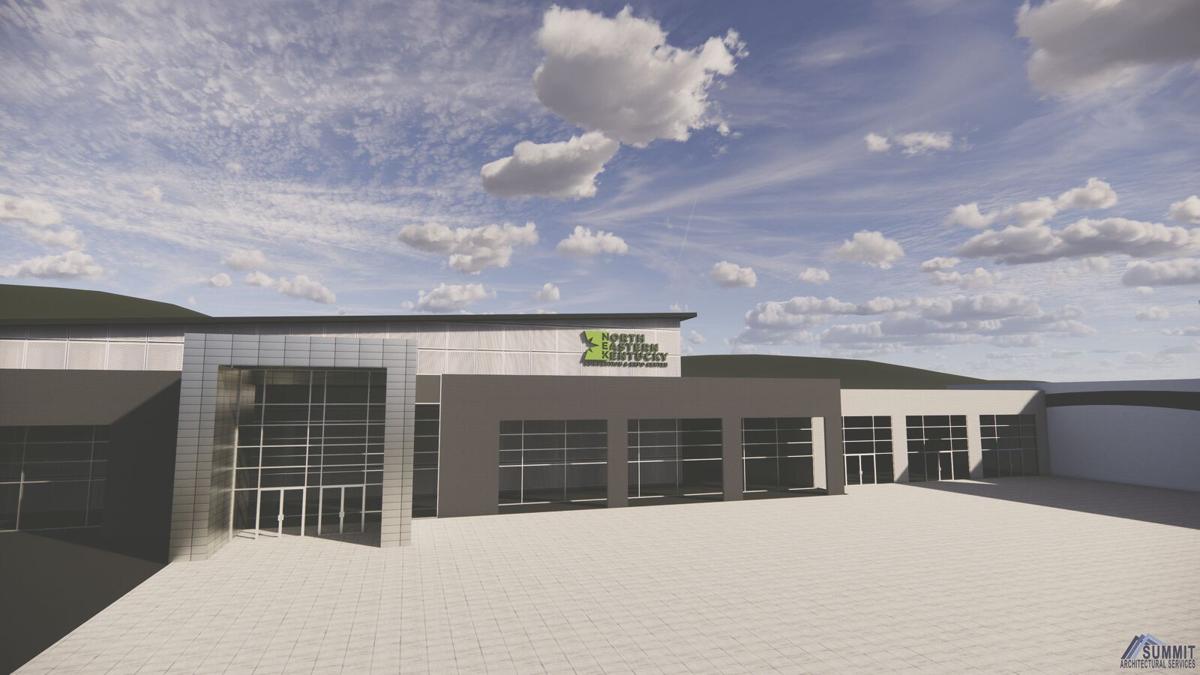 A rendering of the Northeast Kentucky Convention and Expo is seen. 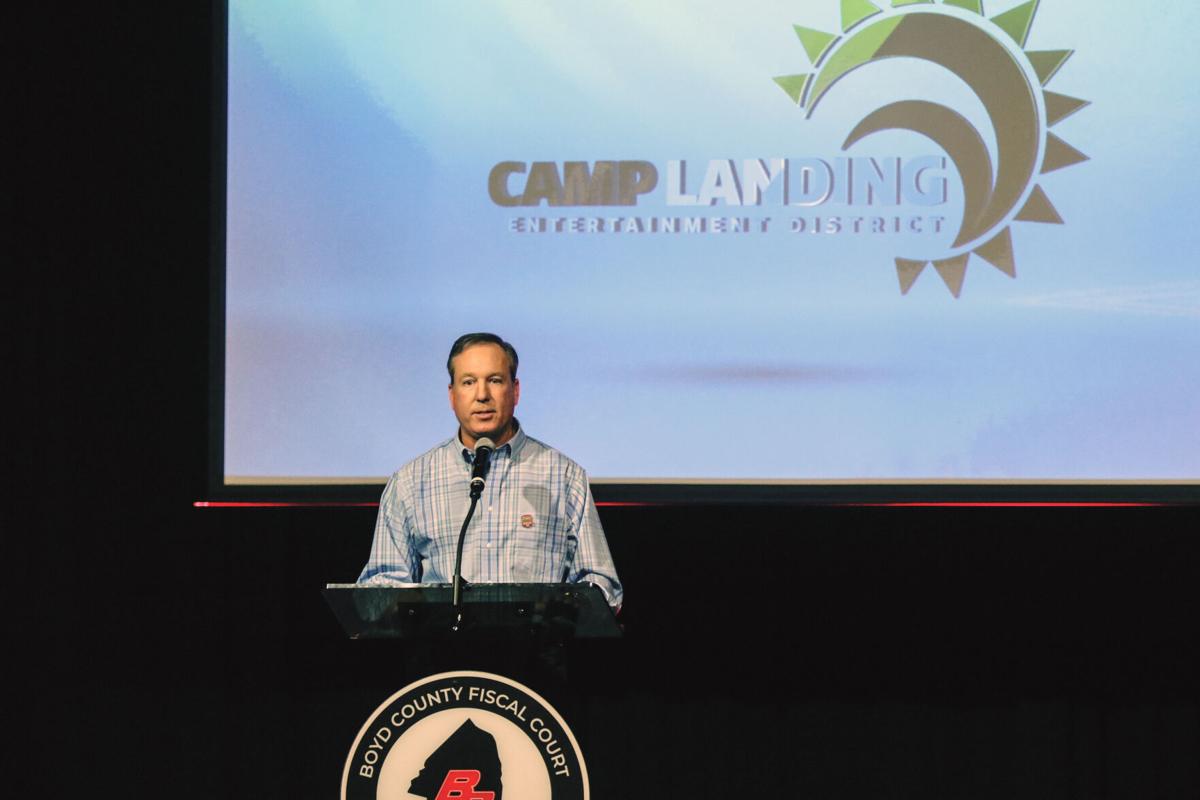 Jason Camp talks about the plans for Camp Landing Entertainment District at the former KYOVA Mall site during a press conference on Friday at the Boyd County Convention Center. Matt Jones | The Daily Independent 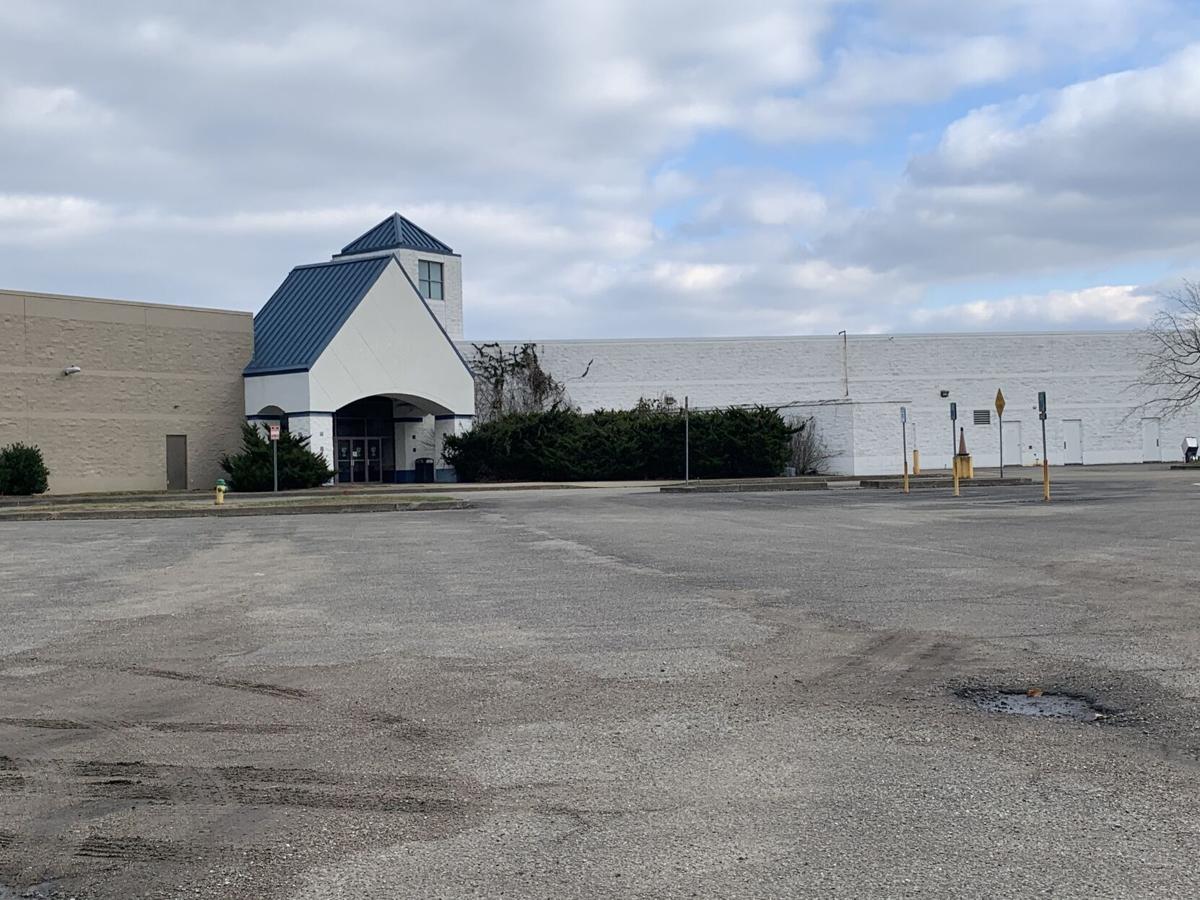 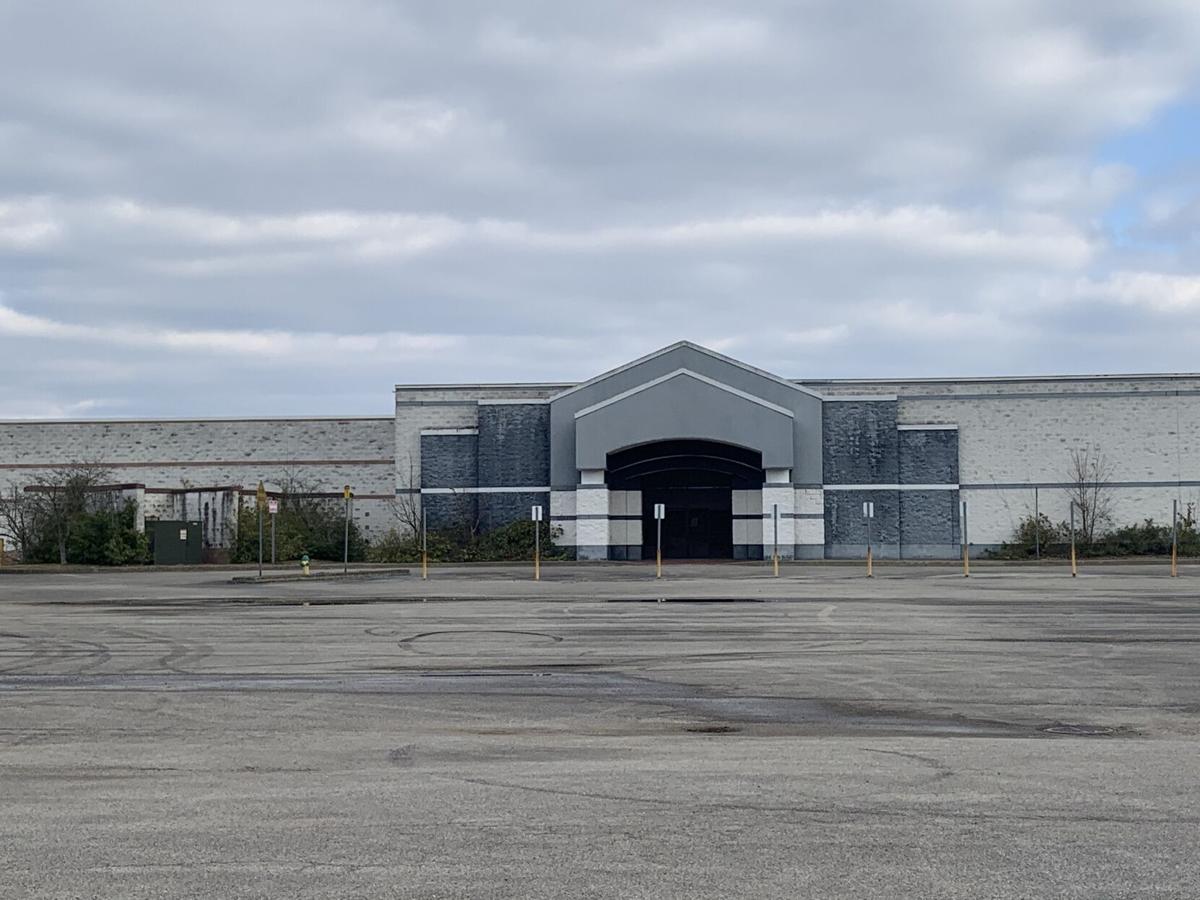 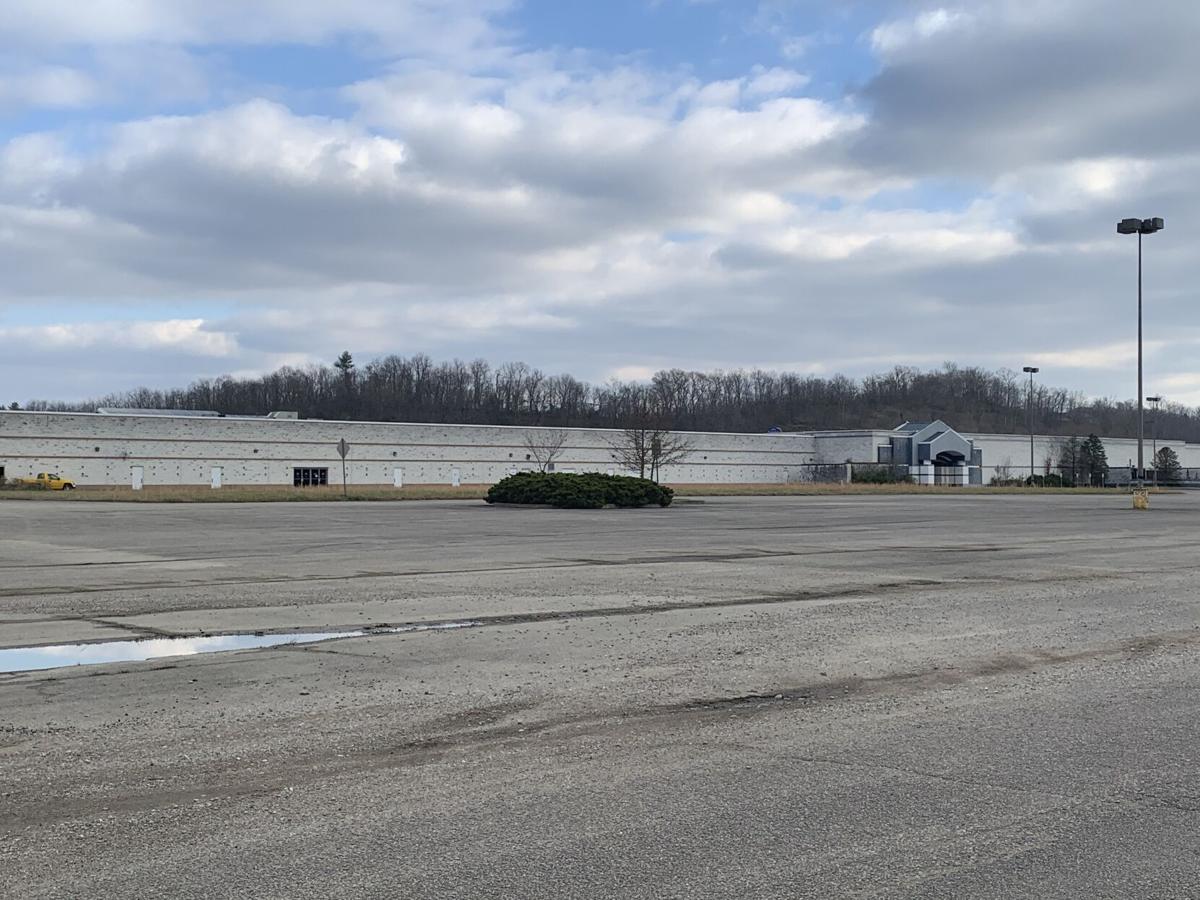 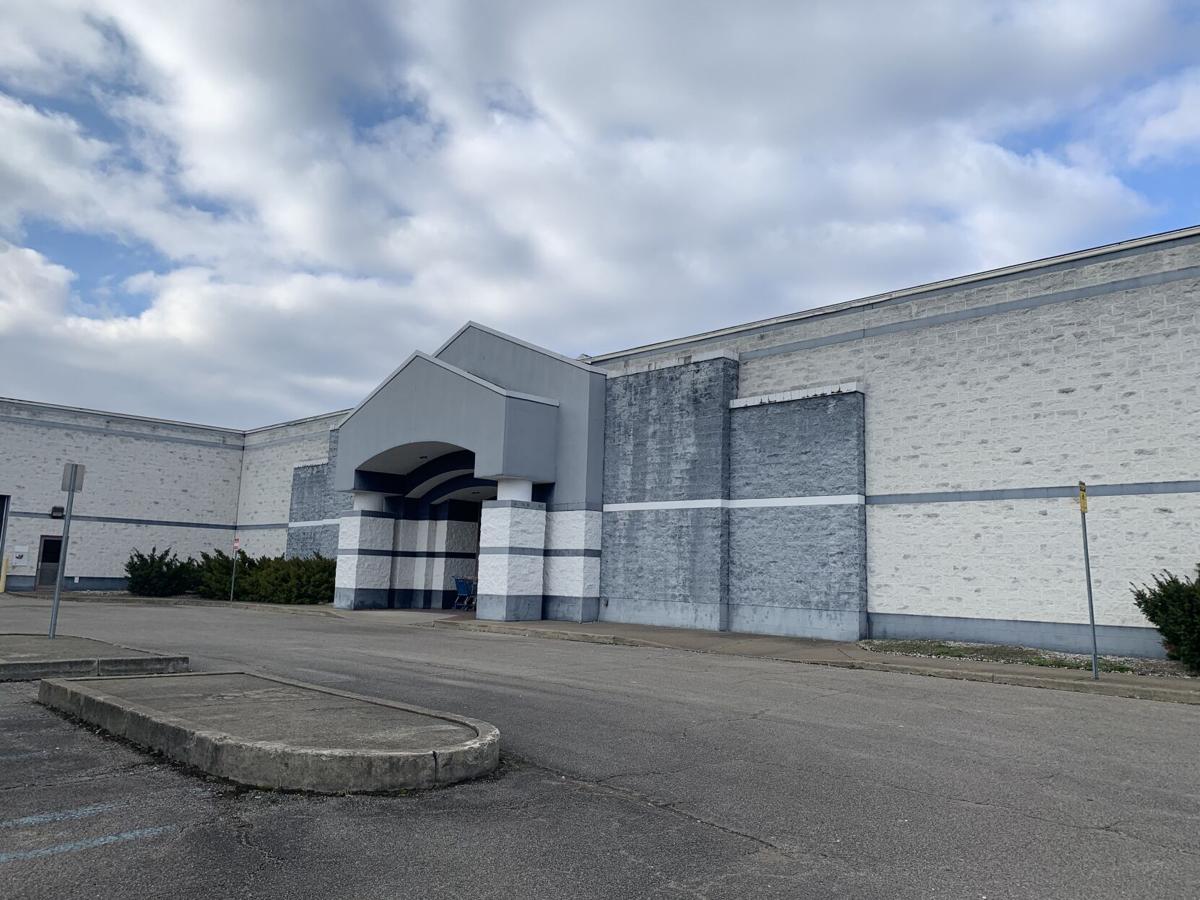 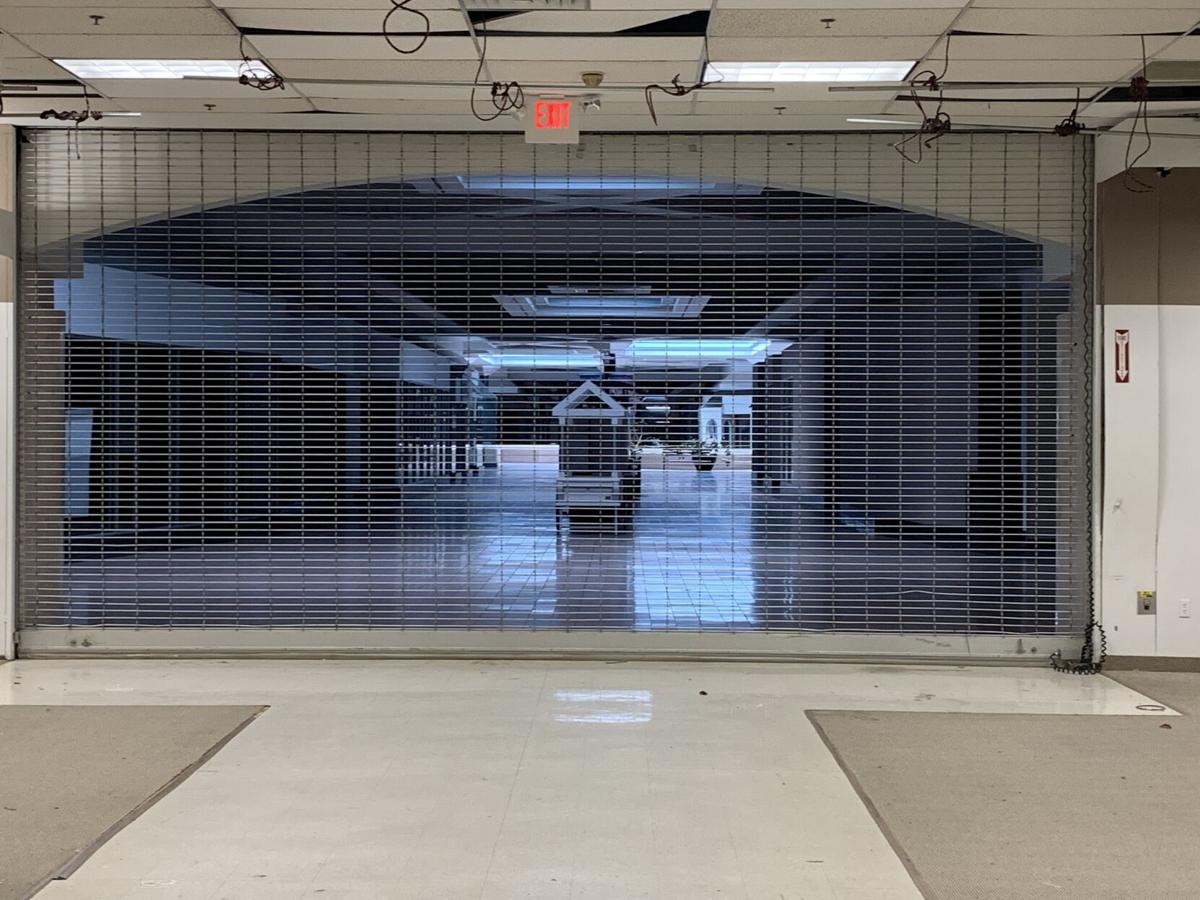 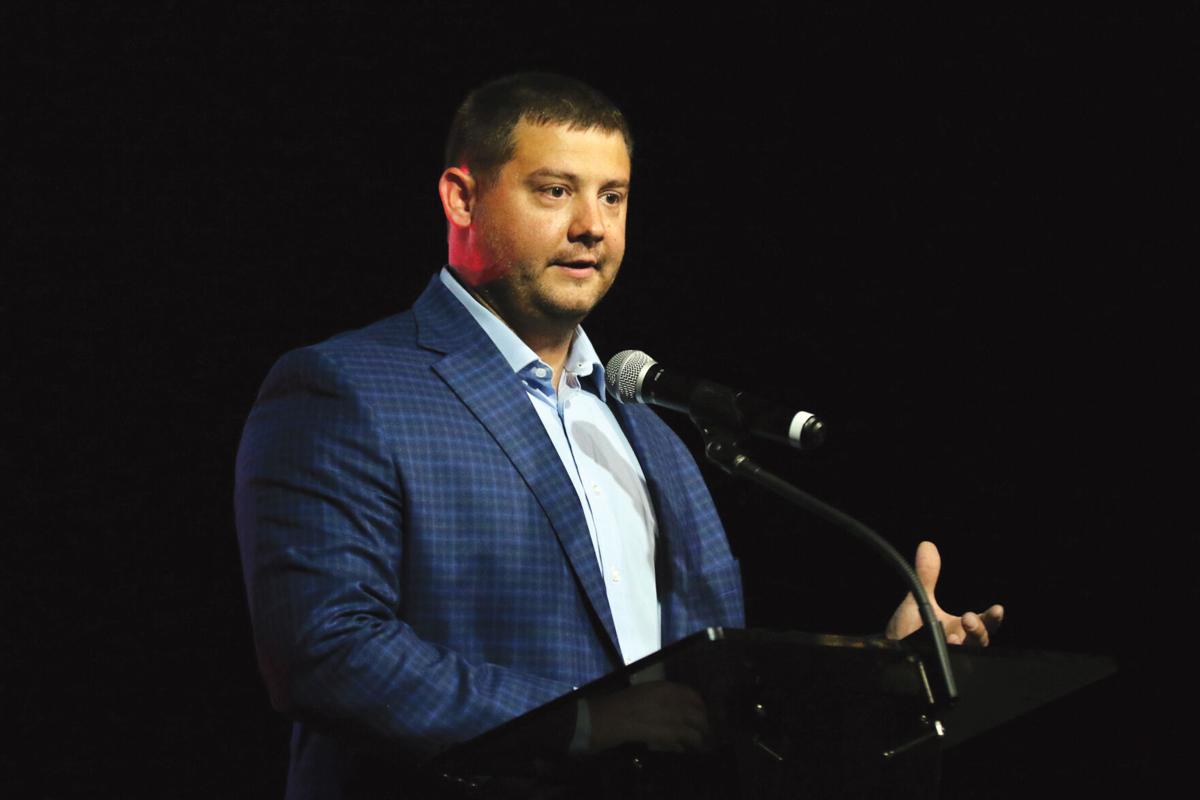 Boyd County Judge-Executive Eric Chaney talks about the plans for Camp Landing Entertainment District at the former KYOVA Mall site during a press conference on Friday at the Boyd County Convention Center. 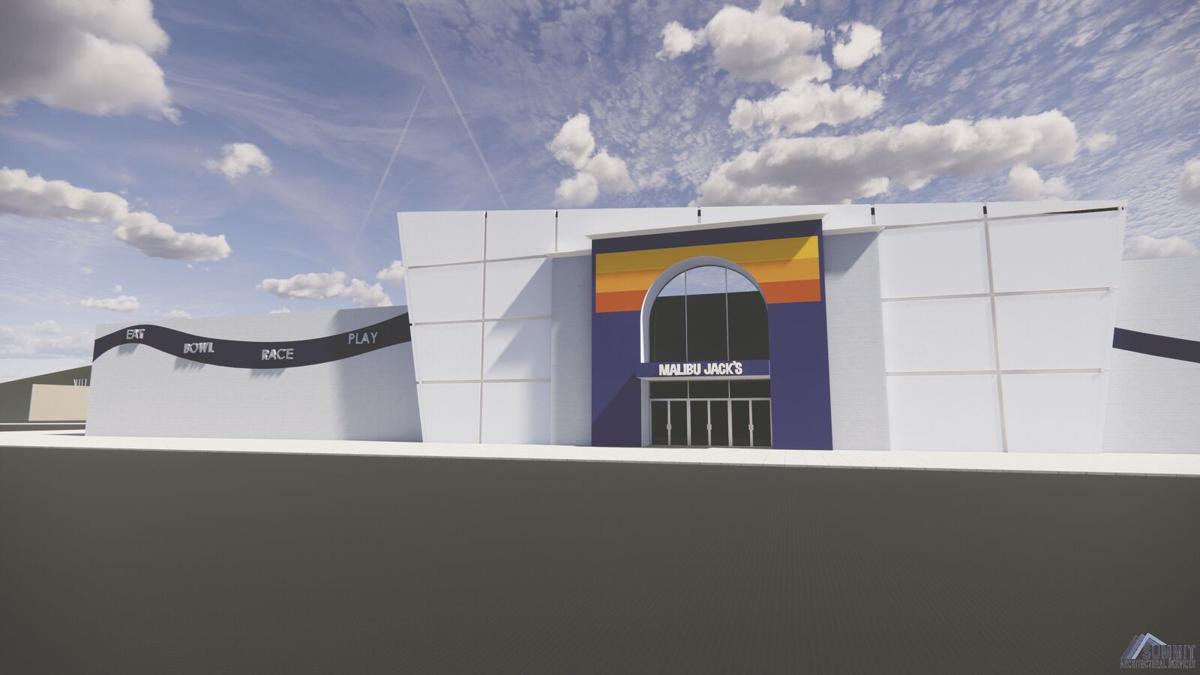 A rendering of the Malibu Jack’s is seen. 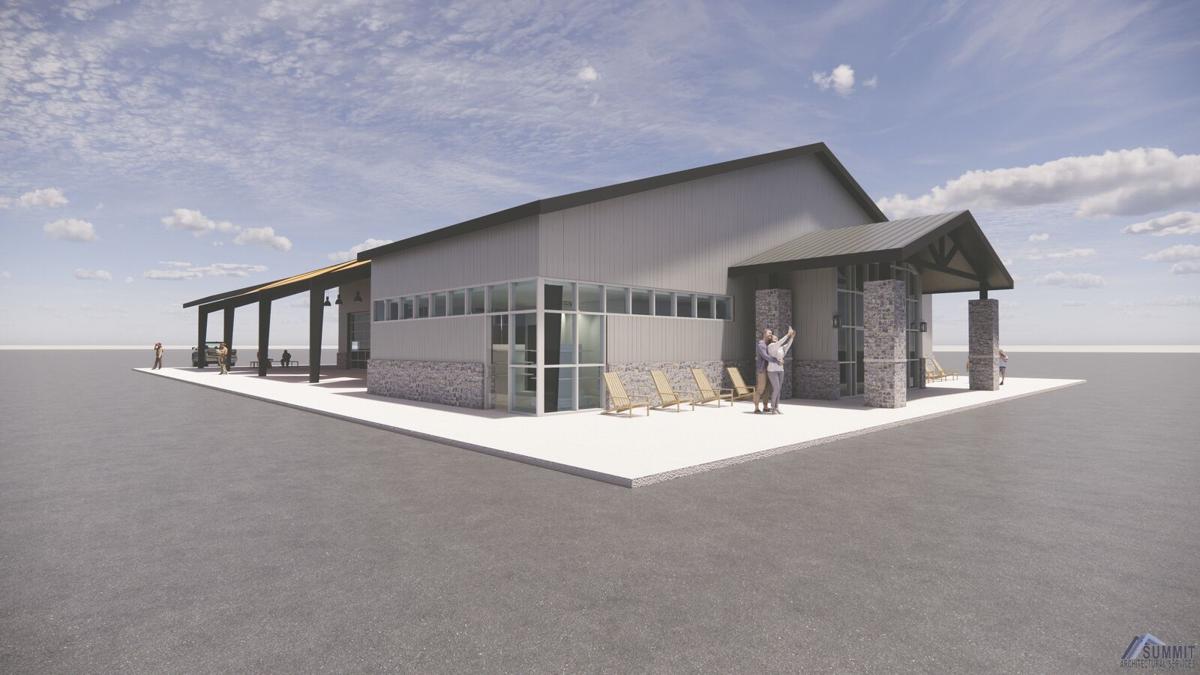 A rendering of the Farmers Market at Camp Landing is seen. 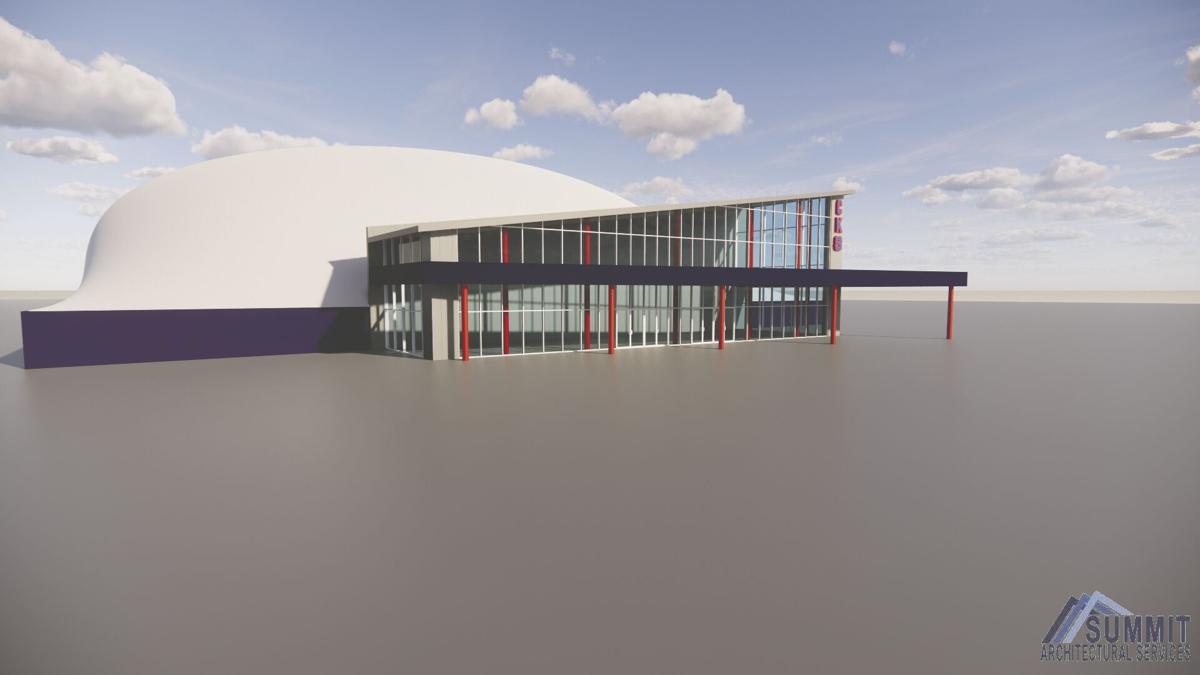 A rendering of the Cedar Knoll Sports Complex is seen.

A rendering of the Northeast Kentucky Convention and Expo is seen.

Jason Camp talks about the plans for Camp Landing Entertainment District at the former KYOVA Mall site during a press conference on Friday at the Boyd County Convention Center. Matt Jones | The Daily Independent

Boyd County Judge-Executive Eric Chaney talks about the plans for Camp Landing Entertainment District at the former KYOVA Mall site during a press conference on Friday at the Boyd County Convention Center.

A rendering of the Malibu Jack’s is seen.

A rendering of the Farmers Market at Camp Landing is seen.

A rendering of the Cedar Knoll Sports Complex is seen.

From Kyova to Wow-you-over, a croaking mall is giving way to an economy-boosting, multiple-use complex that could create up to 800 jobs, according to Boyd County Judge-Executive Eric Chaney.

So, what could be coming? A Malibu Jack’s, a farmers market, a 15,000-20,000-capacity sports/concert arena, a 3,000-5,000-person convention center, a 300-room hotel, a 100-unit apartment complex, a bourbon and/or beer distillery, up to eight or nine restaurants and a revamped movie theater. A kayak slip, a fishing area in the Little Sandy River and a walking/jogging trail are factored into the plans, too.

The property is now in the collective hands of Jason and Elisabeth Camp, Glockner Family and the county, as announced on Friday afternoon at the Boyd County Convention and Arts Center — KYOVA has now been rechristened the Camp Landing Entertainment District.

The Camps signed off on the deal Thursday at 2 p.m., purchasing the 92-acre property sitting fallow on U.S. 60 for $8.5 million — $1.1 million higher than the assessed property value listed by the Boyd County Property Value Adminstration website.

Boyd County bought the Sears portion of the mall, a 50-foot breezeway and 2 acres of the parking lot at the former site of R.J. Kahuna’s. Through an $11 million refinanced bond, the $2.5 million went toward purchasing the property, $7.5 million will go toward “things in the mall itself” — $5 million will be applied to the convention center alone.

“The great thing about this bond is it’s going to be at no additional cost to the taxpayer,” Chaney said.

Before the dust settles, the county’s economic development director, T.J. Morrison, said a total of $30 million will be invested into the property by all the parties involved and 800 jobs will be created.

Work on the county-owned portions are to begin Monday, according to Chaney. Camp said within an hour after inking the deal, he already contacted the movie theater manager to see about getting it up and running — right now, Camp said he hopes moving pictures will be shown within three to four weeks.

The hotel on the premise is expected by mid-2023, after contracts are secured. Camp said he’s still reviewing various hoteliers who have approached him and his business partners.

“Right now, there’s a lot of folks who want a part of this, so we’re not jumping on the first offer,” he said. “We want to see what’s out there.”

The timeline on the sports complex is a bit murkier — Morrison said there are interested parties looking into it and designs are being investigated.

“The funding is there,” Morrison said.

Construction costs — which have skyrocketed under recent inflation — shouldn’t slow down the project either, according to Camp. The high cost on materials — which have started to trend downwards — was taken into account, and the idea is to get it timed right to build at a better cost, Camp said.

“The main thing is getting that movie theater reopened,” Camp said. “If we can have something there, we can get restaurants in and start to grow this.”

A deal 16 months in the making started with “Dancing With Our Stars,” when Camp met Chaney and the two began bouncing ideas off of each other in early 2020.

Actually, the idea began blooming before that.

“I got a call. There was this guy, Craig Bouchard,” said Camp in an exclusive interview with The Daily Independent on Wednesday.

Bouchard was the brainchild behind Braidy Industries, which is now Unity Aluminum — a projected $1.8-billion aluminum mill that was to bring about 550 jobs by last year when initially announced. Bouchard has since been ousted by the board of directors, vacated the area, and received a $6 million payout on his way out.

Camp — who, along with his family (wife Elisabeth and five children), relocated from Naples, Florida — stayed put. Camp is part of the Three J’s Group that owns and operates The Winchester and Smokin’ J’s. Originally, the group planned to feed the aluminum mill construction crew at EastPark and then manage an in-house food and beverage service and employee restaurant.

Camp comes from a business and marketing background, mainly in sporting and event management. He said over the better part of two years, he approached the fiscal court about getting a sports complex going. Time and again, Camp said Chaney would brought up the dilapidate mall sitting on U.S. 60.

“I didn’t move up here for money,” Camp said. “I didn’t move up here for business opportunities. I’m a man of a family of faith. Up here is a faith-based community where people ask you how you’re doing or how your day is going, and they want to hear the answer. It’s like, I say that, and I was in Kentucky Farmers Bank for the first time, and I saw a depiction of Jesus and one of the Bible stories, and that’s why I’m here. You couldn’t have that in Naples. You couldn’t have that in Florida. Being a man of faith is looked down on there, but up here, it’s a strength.”

Johnny Eggleston, the late Ron Reynolds and Nancy Reynolds owned Kyova Mall from the mid-2000s until now. The ultimately relinquished control, much to the delight of Chaney and Morrison.

Chaney and Morrison have both called the Kyova Mall a “black cloud” in the county, acknowledging its past successes while labeling its current state.

“Everything in this country starts with a spark, and what is happening here today (Friday) is that spark,” Chaney said.

The Malibu Jack’s team was present during Friday’s big announcement. They erected their Louisville facility in 80 days. This one could take up to 120. It will be the largest in the state from the Bluegrass-based company, sprawling out over 140,000 square feet.

Both Camp and Morrison said the Malibu Jack’s crew projects this spot to be the No. 1 location in the state, in terms of revenue.

Camp said Malibu Jack’s should be up and running just in time for the holidays.

Commissioners Keith Watts, Larry Brown and Randy Stapleton all emphasized the economic progress this project could bring. Watts said the fiscal court works for the people and they were listening when he received comments from everyday citizens via Facebook about bringing Malibu Jack’s to the area.

“Always reach out to us,” Watts said. “We’re always trying to do what’s best for our community and we’re always listening.”

Brown said he believes this is only the beginning.

“It’s not stopping here, I believe there will only be more opportunities from here,” he said.

Stapleton said the emphasis on economic development was something all the commissioners ran on — and now they’ve delivered.

“When we were elected, we were for economic development,” Stapleton said. “Once we got T.J. on board, I knew we had the right man for the job. This is a big day for Boyd.”

Rural King and Burger King will remain at the current Kyova Mall premises along U.S. 60 near I-64. Camp said Rural King has another four years on its lease and doesn’t anticipate it leaving even after it’s up.

“To my understanding, that’s in the top 15 for sales in the country,” he said. “I don’t think they’ll go anywhere.”

According to Chaney, if all goes as planned, there will be about 250 jobs up for grabs by early 2022.

Chaney, Morrison and Camp also mentioned a few other potential establishments that could land in the district, including golf simulators and axe-throwing.

However, the flip-side to all this is if one component of this district is a flop, or doesn’t come to fruition at all. Camp said he is confident that there are enough entities involved and long-term contracts being worked out that the project as a whole can withstand a failure of one of the parts.

As of Wednesday, the plans potentially included keeping Callihan's American Pub & Grill. However, the owner indicated that it will not remain there. The Kids Sale, another KYOVA fixture, will have one last sale starting July 23.