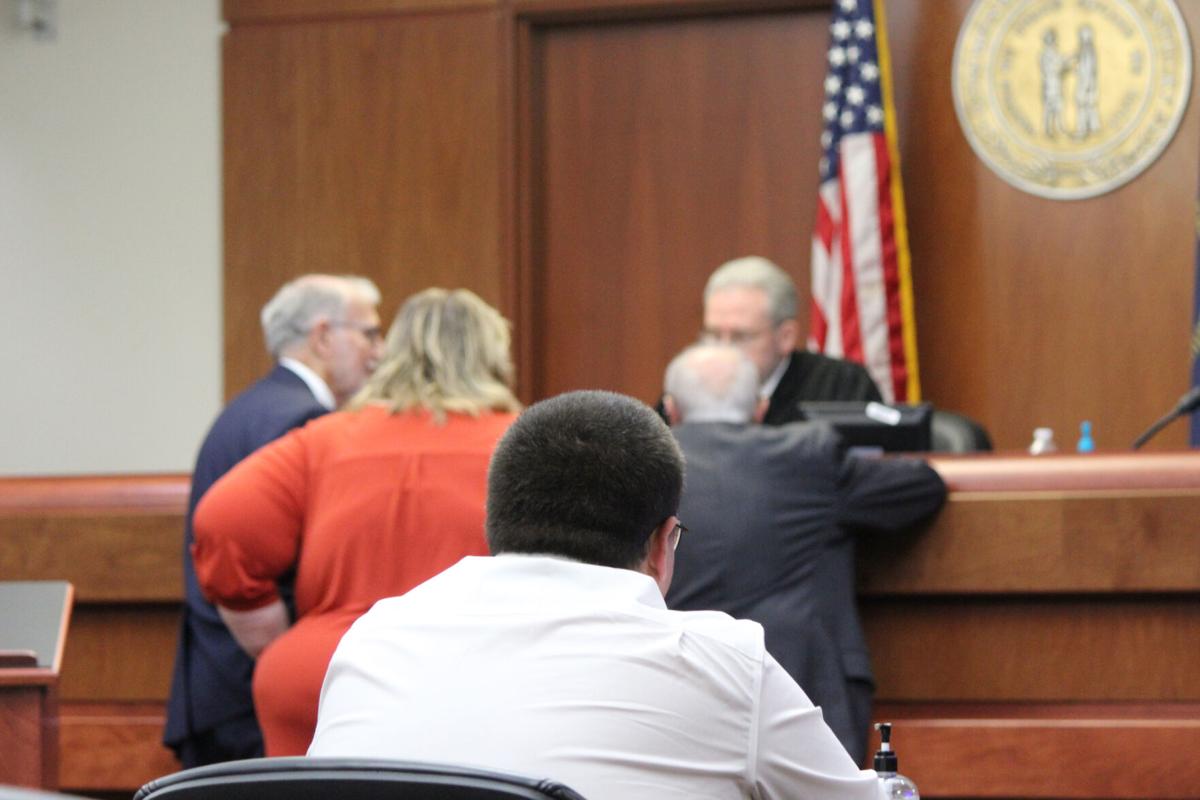 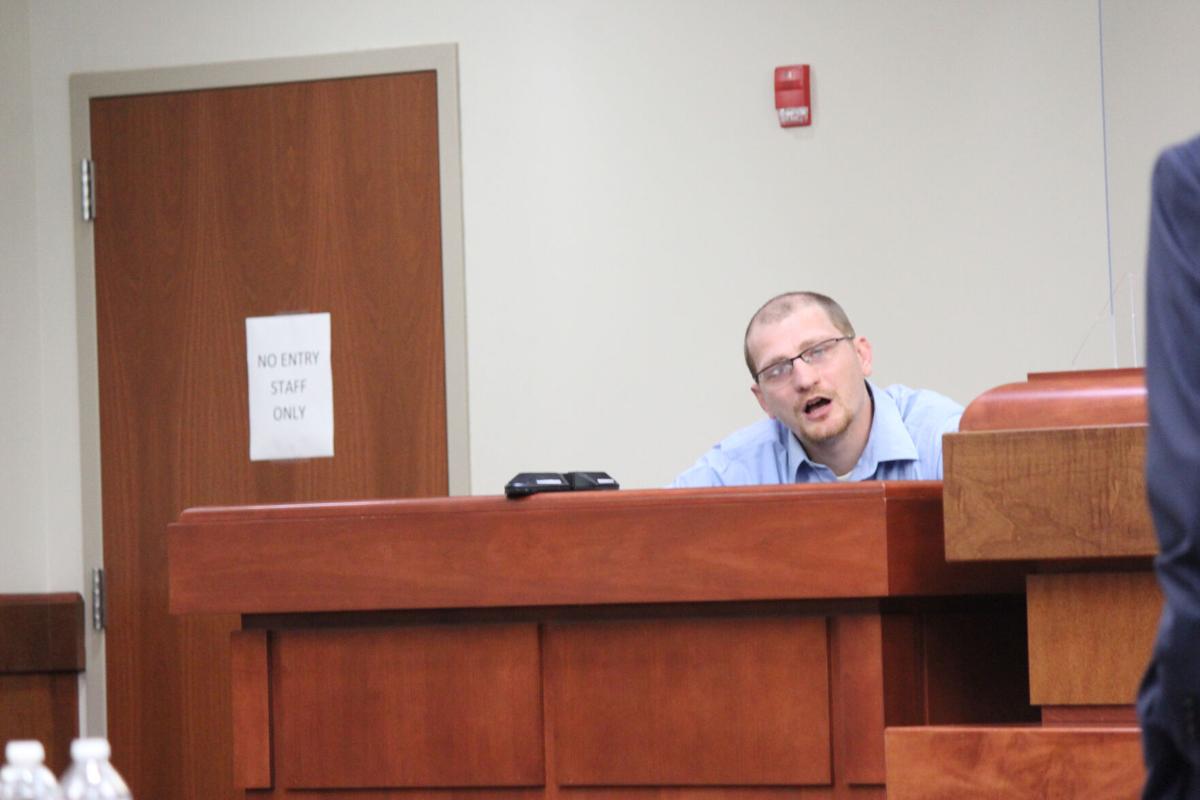 Travis Hanshaw, a Boyd County deputy jailer from 2014 to 2020, testifies about the morning 40-year-old Michael Moore was found unresponsive in the booking area of the jail. HENRY CULVYHOUSE | THE DAILY INDEPENDENT 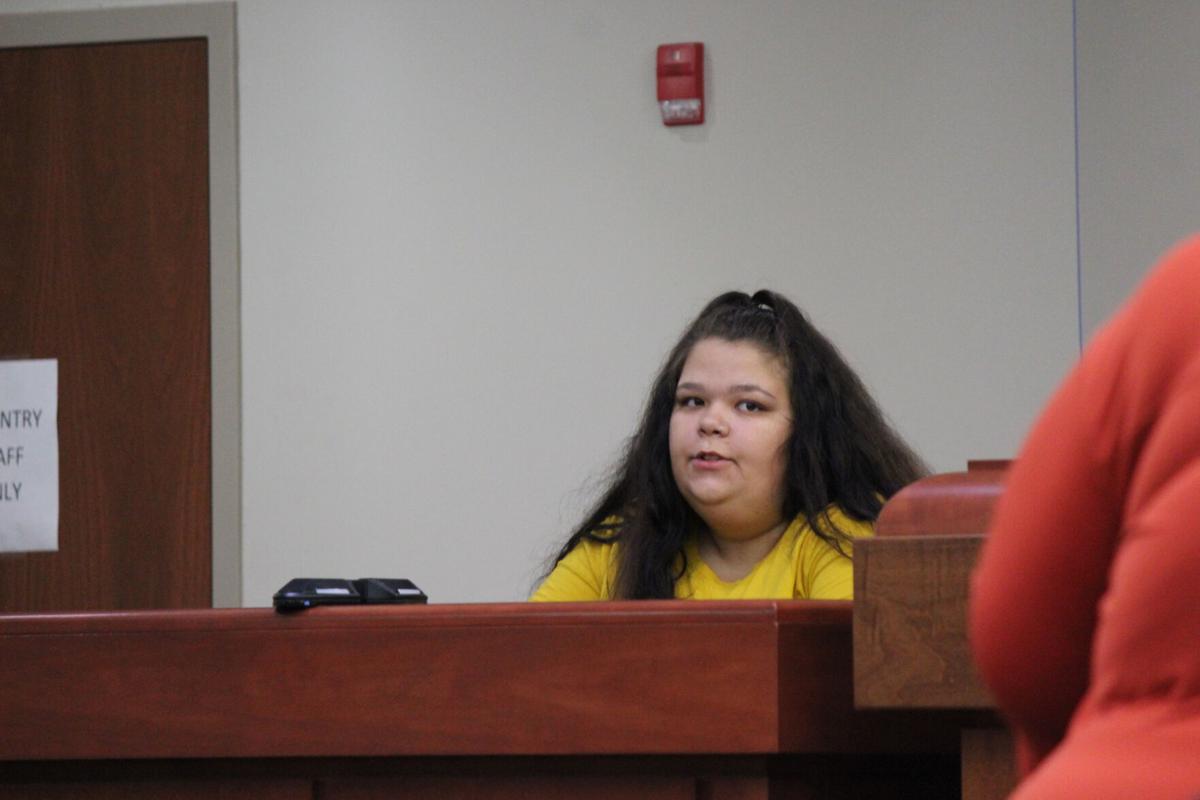 Alicia Beller, a former Boyd County Deputy Jailer, testifies about her observations on Nov. 27, 2018, when 40-year-old Michael Lee Moore was allegedly abused by her coworkers. HENRY CULVYHOUSE | THE DAILY INDEPENDENT

Travis Hanshaw, a Boyd County deputy jailer from 2014 to 2020, testifies about the morning 40-year-old Michael Moore was found unresponsive in the booking area of the jail. HENRY CULVYHOUSE | THE DAILY INDEPENDENT

Alicia Beller, a former Boyd County Deputy Jailer, testifies about her observations on Nov. 27, 2018, when 40-year-old Michael Lee Moore was allegedly abused by her coworkers. HENRY CULVYHOUSE | THE DAILY INDEPENDENT

CATLETTSBURG Jurors heard testimony from 10 witnesses Friday in the trial of Brad Roberts, including eyewitness testimony from a fellow jailer’s deputy who turned state evidence against her co-workers in the 2018 death of inmate Michael Lee Moore.

Moore, 40, died at the Boyd County Detention Center on Nov. 29, 2018, after prosecutors say he was abused on the night shift that ran from Nov. 27 to Nov. 28. Roberts was the shift supervisor on the night of Nov. 27 and has been charged with criminal abuse and manslaughter along with four other co-workers.

Alicia Beller was working on the night shift of Nov. 27-28, 2018, alongside Roberts, Colton Griffith, Zachary Messer and Jeremy Maddox. Being a teammate rather than an inmate, Beller took a plea deal to one count of first-degree wanton endangerment, which will be deferred for five years.

If Beller can keep her nose clean, her felony case will be dismissed.

Beller had worked at the Boyd County jail for six months prior to the incident — before that, she had worked at the Western Regional Jail for one year and had resigned voluntarily, taking a pay cut. Under cross-examination by defense attorney Michael Curtis, Beller was asked why she resigned to take a lesser-paying job that was a longer commute — she lives in Putnam County, West Virginia.

Beller testified that on the night of Nov. 27, 2018, she was pulled off the floor of the women’s side of the jail to work the control booth, which operates the cameras and the doors throughout the facility. The reason she was given was because a “lively one” — Moore — was being transported to the jail by Ashland Police.

She said Roberts, Messer, Griffith and Maddox lined up in the sally port of the jail to receive Moore, whom they were told was intoxicated. She said the staging of all four officers outside in the sally port was unusual in her experience at the jail.

It was the first night she was in the control room alone, she testified.

Beller said Moore was not aggressive with deputy jailers, but was fidgety, cursing and appeared to be high. She said saw the other deputies being rough with Moore and had several conversations with Roberts.

In the first conversation, Beller said she asked Roberts to get medical attention for Moore, after watching Messer bounce the inmate’s head off the concrete wall. In the second conversation, she again asked Roberts to speak with the other deputies about being too rough with Moore — she said Roberts pulled them into the control booth and during a conversation they all laughed about it and left.

When asked by Copley why she didn’t call for help, Beller gave the Nuremberg reply of “I followed my chain of command.”

Beller also testified while deputies were inside the bathroom with Moore, she heard a “crunching sound.”

During cross-examination, Beller said she didn’t believe the BCDC at the time had an adequate training program, stating she received better training in West Virginia.

West Virginia has a regional jail system controlled by the state and while many times correctional officers are placed on the floor, they do at some point undergo six weeks of training at a residential academy.

As testified to Thursday, the training standards at BCDC circa 2018 was a 40-hour training week that consisted of slideshows via powerpoint.

Beller also said she did not follow protocol by leaving the door to the control room unlocked and failing to write an incident report about her observations. She also did not alert medical, she testified.

Local boxer and former deputy jailer Travis Hanshaw took the stand Friday as well, stating he worked at the jail from 2014 to 2020, before he left for Ashland FCI. Hanshaw was working day shift on Nov. 29, 2018, as the shift supervisor.

He said when he came to work, he saw Moore strapped in a restraint chair in the booking area. During the “pass down” — a debriefing by deputies and supervisors from the prior shift — Hanshaw said Roberts told him Moore was intoxicated and had bitten Messer and that’s why he was in the chair.

Hanshaw said as the day shift supervisor, he checked the cameras in the control room and noticed one moving on the roof. After checking the roof to find the cause was ice, he came back down and saw Moore had wet himself while strapped in the chair.

Moore was let out of the chair and given a fresh uniform to change into inside the bathroom. He said while Moore was still erratic, he was cooperative.

That happened between 6:30 and 6:45 a.m., Hanshaw said. At 6:57 a.m., Hanshaw saw an inmate look at Moore and asked two deputies to check on him. Moore was unresponsive — he was taken out of the chair and deputies administered CPR and a defibrillator to bring him back.

Messer, who was off the clock but waiting at work for the courthouse to open, assisted and administered chest compressions, a point Curtis asked about throughout Friday’s testimony.

Here are summaries of the testimony from the Friday’s session:

• Kristin Gillum: An LPN who worked at BCDC for approximately five years. Gillum testified she attempted to do a medical assessment on Moore during the day shift of Nov. 28, 2018, but was unable to do so because he was too intoxicated. Gillum said she found no bruising on Moore, who was awake but unintelligible. She did find a knot on his head — she also inspected a spot below the ribs where Moore indicated he was in pain. Gillum said if she knew he had been pushed or fell into a toilet the night prior, she would’ve recommended he go to a hospital.

• Susan Ergin: A part-time LPN who worked at BCDC on the night shift on Nov. 28, 2018. Ergin, who tuned in via Zoom from Washington state, said she tried to do an assessment on Moore as well. She found him to be incoherent and non-responsive to questions she posed. Instead, she took his medical chart from a prior arrest and used it fill in the information. She confirmed Moore had a seizure disorder.

• Tim England: The director of Emergency Management and the long-time deputy chief of Westwood Volunteer Fire testified that Roberts was a volunteer firefighter for 11 years at Westwood. England also testified Roberts had training in CPR a little more in-depth than what is taught to civilians and less so than what EMTs learn.

• James Boyd: A 13-year veteran of Boyd EMS, Boyd was a responding paramedic to the scene, who said he and his partner arrived shortly after 7 a.m. from the England Hill Volunteer Fire Department station. He implied jail staff did not perform proper CPR and when he began chest compressions, he noticed the chest did not “bounce.” Without a “bounce” in the chest, Boyd said that indicated there was an internal problem going on with Moore. He also testified that sternum rubs — which Messer appeared to give Moore on Nov. 27, 2018 — are no longer common practice and were only used on unresponsive patients.

• Matt Daniels: A 10-year veteran of Boyd EMS, Daniels said he was the chief paramedic on the call and was in charge of furnishing a report to the coroner’s office. He said after noticing no activity in the vital signs and seeing the stiffness in the chest compression he pronounced Moore dead and alerted the coroner’s office.

• Harold Riffe: A deputy coroner with the Boyd County Coroner’s Office, Riffe testified to pictures he took of Moore’s body. In the pictures shown to the jury, one could see a dark bruise on Moore’s chest in the sternum area, as well as bruises on his wrists and hands.

• Howard Rose: A deputy coroner who testified that he interviewed Messer and noticed Moore had a black eye, bruising on the left side, sternum and toes.

• Mark Hammond: The Boyd County Coroner, Hammond testified that he worked alongside the state medical examiner’s office and Kentucky State Police in the case. He said he determined the cause of death as blunt force trauma to the torso.