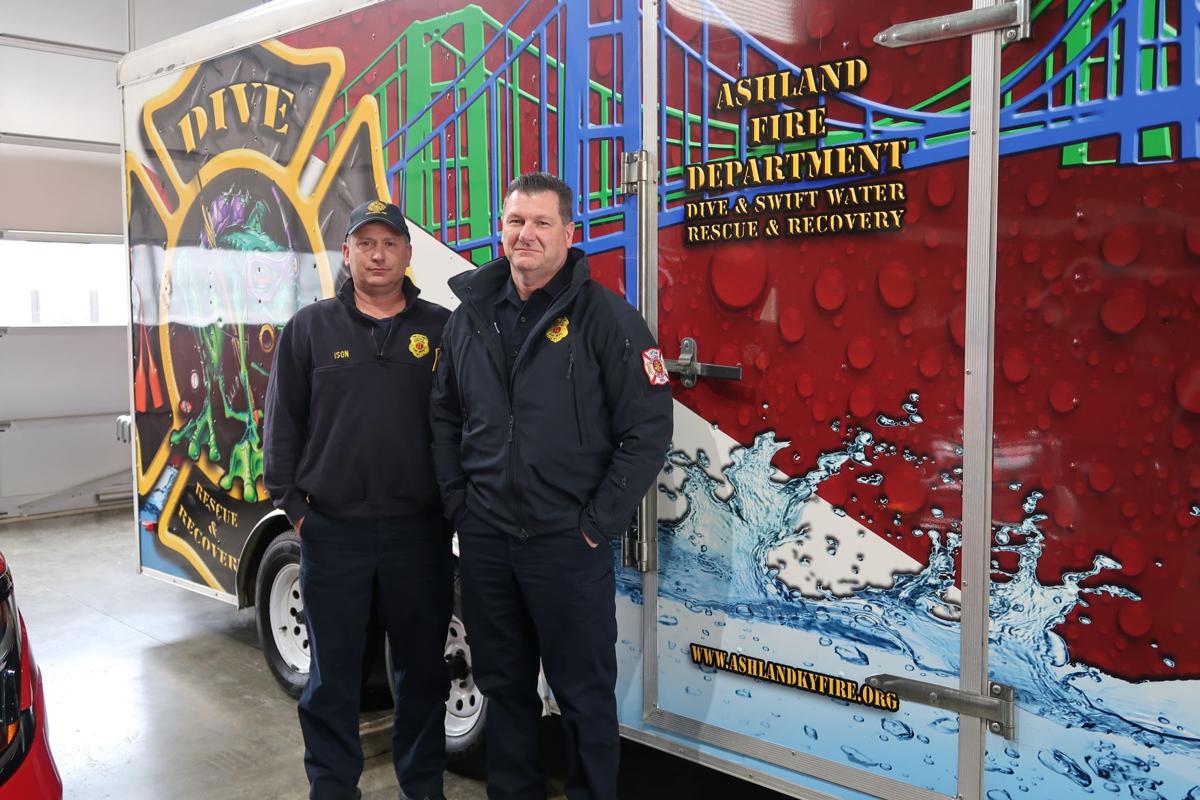 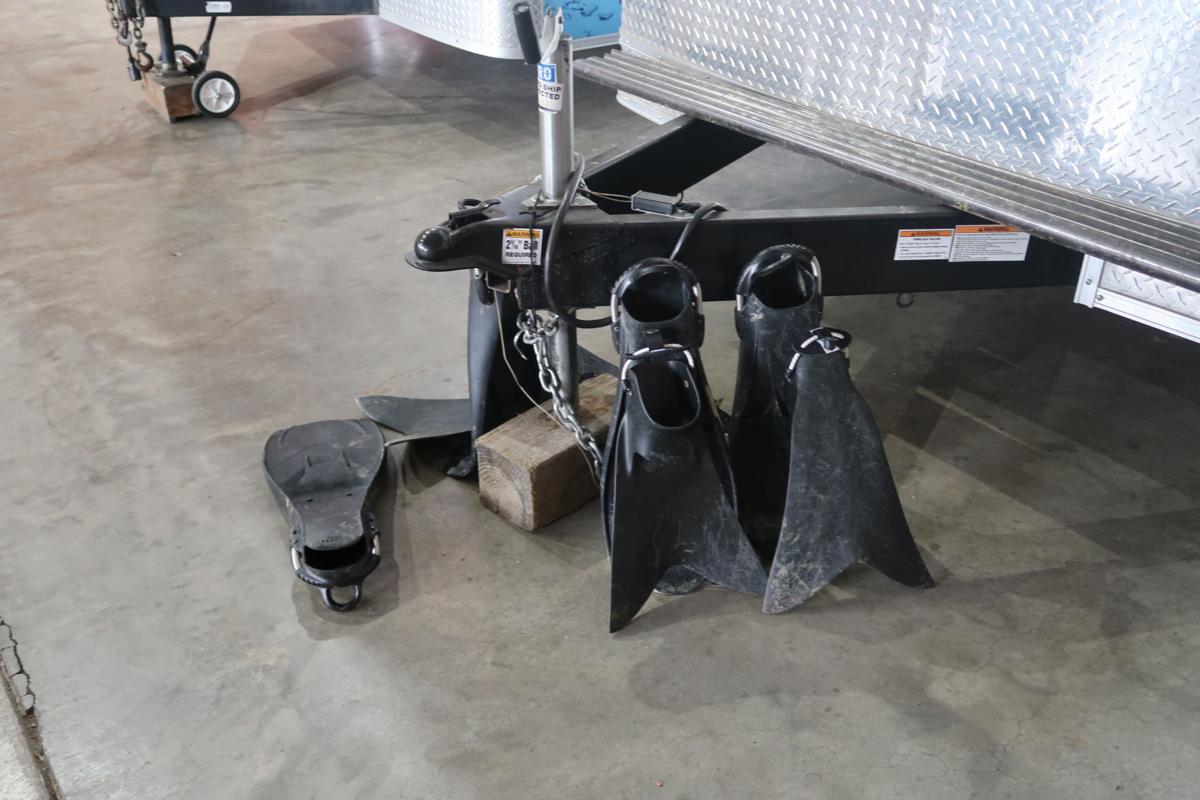 Some of the dive team’s gear is pictured at the Ashland Fire Station. 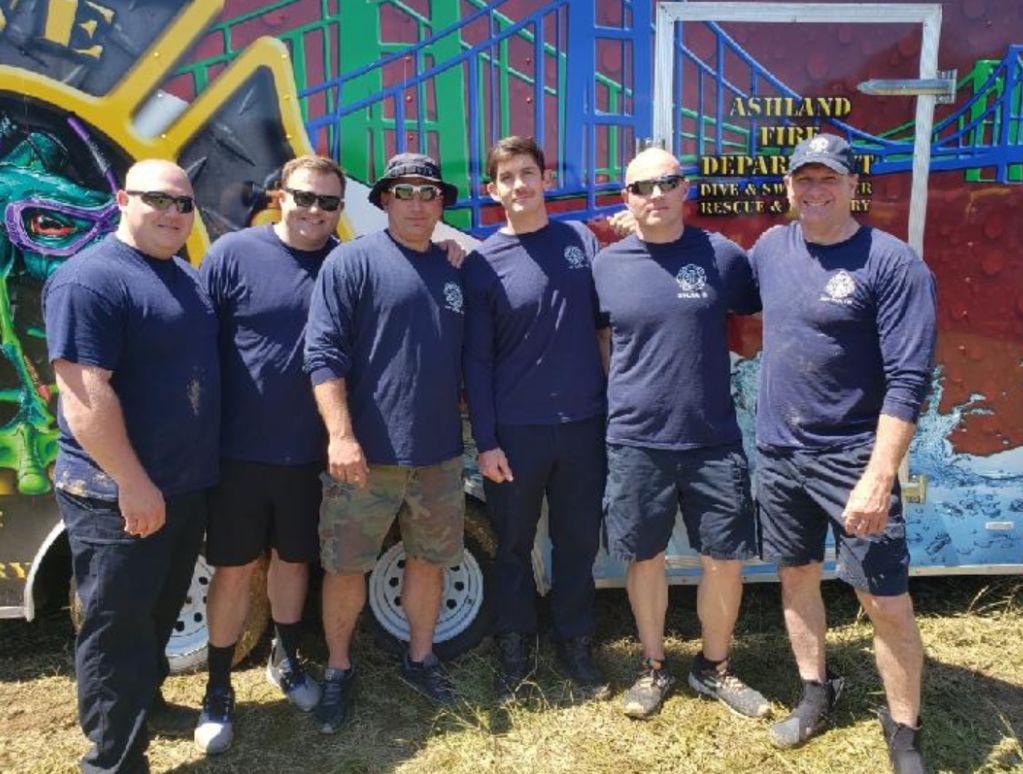 Some of the dive team’s gear is pictured at the Ashland Fire Station.

ASHLAND It was the type of call Ashland Fire captains Keith Salmon and Jesse Ison don't want to get — an Amish buggy overturned in a creek and five children drowned.

“Kids are different,” Salmon said. “You want to find them, but you don't want to be the one to find them.”

On April 29, a buggy carrying six people overturned on a low-water bridge over a creek that flowed into the Licking River in Bath County. While the adult was able to swim to shore, the children were tragically swept away in the current.

The accident was reported in media outlets around the world, such as The New York Times and The Guardian.

Hundreds of rescuers poured in from across the region to search for the children. Salmon and Ison said when they responded to help with the search on April 30, four of the children were recovered after their bodies were stopped by a beaver dam.

Salmon and Ison said they learned from locals that the creek is pretty low in normal conditions, maybe knee-deep in most places. But the late April rains caused a back-up on the river, raising the waters high on the creek.

With hundreds of folks assisting in the search, Salmon said he went to his “reliables” — Kentucky State Police and Kentucky Fish and Wildlife — to get an idea of where to start looking.

“I've trained with them (Fish and Wildlife) before, so I asked what did they see,” Salmon said. “They told me when they found the first couple of kids there (in the dam) the were wedged pretty tight. When they pulled them out, he may have have gotten loose.”

Underwater recovery isn't like scuba diving during a cruise to the Bahamas. The local waters are muddy, deep and cold. Ison said searching by sight isn't an option.

“If I try to keep my eyes open, my head starts spinning and I get a horrible headache,” he said. “You got to keep your eyes shut.”

Instead, the diver must do it by feel. Salmon said he likes to envision being in a grocery store, grabbing for a row of items on a shelf. He starts at the bottom, using his hands and feet and works his way up.

“You don't need to see it, you just know when you touch it,” he said.

Usually, Salmon will do one or two passes on an area; this time he did four or five. Still no luck.

All along the creek, other dive teams checked stumps and undercuts in the bank. The National Guard, activated to help with COVID-19 relief, had soldiers marching along the creek five wide and chest deep.

The rains rose the water another foot or two — the search was called off for the day.

“The fire department is like an insurance policy you pay on but hope you never have to use,” said Ashland Fire Chief Greg Ray. “The dive team is a piece of those services we offer.”

Traveling all around the Tri-State, the Ashland Fire Rescue and Recovery Dive Team has seen its fair share of action since its inception in 2002.

For 18 years, Salmon and Ison have dove into rivers, ponds, lakes and streams searching for bodies, weapons and other objects. It's not a glamorous job, nor does it often end up on the front page of the newspaper, Ison said.

“Maybe every once in a while you'll see a story in the paper about a car recovery, but that's about it,” he said. “But you ask any first responder and they'll tell you we don't do this for the write ups.”

For Salmons and Ison, it's about bringing closure to families.

“Knowing that their loved one is in the water is a bad thought,” Salmon said. “A lot of times they're on the scene, so you want to help.”

Last year, a suspect in a shooting threw a 9 mm pistol into the Ohio River. Salmon said he chucked a rock in that weighed about the same for a reference point and that's where the search started. They tied a diver off with rope and the dive master — the person supervising the search from the surface — watched the diver's bubbles. Once the diver reached the end of the search area, the master tugged the rope and let out a few feet and the search resumed.

“We not only found the gun, but we found his cell phone and they were able to pull information of it to use against him,” he said.

Sometimes, the job can be downright dangerous.

Searching areas such as the Ohio, with all the coal barges going overhead and kicking up waves, there's a risk for a diver to become entrapped in debris and limbs.

“That's a big deal when you're in an environment with limited air,” Salmon said. “Now, when a river is ripping, we have certain parameters about speed and things like that for when we'll go in. If it's right on the edge, we'll go in if we know a person is there.”

Not like in the old days, when Salmon and Ison were a bit younger. Laughing, both said they'd just gear up and hop right in back when the team started. Today, they're a bit more selective, using available tools like SONAR, an echo location system.

For instance, they were once on a call in Hazard, where a man had driven a pickup truck into a river.

“It was rocking pretty good,” Ison said. “We wouldn't have tried, but they had snagged the truck so we had a line we could follow down there, which was good because that current was blowing people off it was that bad.”

Added Salmon: “They wanted us to go in and get him, but there was no way. Just bring him up with the truck.”

And that's what they did.

Other times, it's not conditions but the river itself that can pose a challenge. According to Ison and Salmon, about 30 feet off the Ohio here in Ashland, there's so much iron ore that's accumulated from over the years it causes misreads on SONAR. So when someone throws a weapon off a bridge, they got to do it the old fashioned way.

In other cases, the human element can lead to problems. Take for instance when a plane crashed into the Ohio River near Worthington back in 2007. Finding the body wasn't an issue — he was still in the plane. With jet fuel everywhere, finding the plane wasn't an issue either.

Getting the body out with hundreds of people watching from the city park, some grilling food, made it a bit tricky.

“We usually bag them under the water out of respect for the family, so in this case we decided that would be best since everyone was watching us,” Salmon said. “So we put him on the wing. Then I tried to fill it with my spare regulator to help it float up, but that created its own set of problems.”

Luckily, they were able to get the victim out.

‘We were going to find him’

On May 2, the Ashland Fire dive team returned to Bath County, following a day in which searchers waded the creek.

It had been weighing on Ison's mind since Thursday.

“You don't sleep much Thursday night when you get home, because all you're thinking about is ‘we didn't find him.' Not that we failed, but it's like, 'Hey, we need to get him out of there,” Ison said. “You think about it all day Friday, then Saturday, we made up our minds we were going to stay in the water until we couldn't no more.”

At the same time, Ison didn't want to be the one to find the boy's body. In fact, he hoped they'd be told on the way to Bath County to turn around, because the body had been found. Salmon felt the same way.

“We'd have been tickled to death if we'd pulled up there Saturday morning and they were like, 'We got him, boys,'” Salmon said.

The same day, four busloads of members from the Amish community pulled into the area for the funeral of the four found children that afternoon. Ison said he could see them up on the hill near the creek.

From talking to local firemen, Salmon and Ison learned about another beaver dam near a bend in the creek about a half-mile from where the four children were recovered. Salmon said when they saw that dam, they were confident they'd find the boy.

If he wasn't there, Salmon said there wasn't much hope, since it was 100 yards from where the creek feeds into the river.

“If he had made it to the Licking, we weren't going to find him,” he said.

Arriving at 8:30 a.m., both men acted as dive masters that day, overseeing the search from the surface. In addition to watching after their crews, they also oversaw a couple other teams searching the area.

Using a dive bag and a flannel shirt, rescuers carefully wrapped the body up and brought it to shore — not an easy task, given the conditions.

“It was a steep, I mean completely up and down bank that was slick as snot because it had been flooded out,” Salmon said. “So we wanted to be as careful as we could be because you didn't want to take a risk of dropping him.”

Once out, the body was turned over to KSP.

On the way home, the Office of Emergency Management contacted the team, according to Ison. The family wanted to thank the team for finding the boy — they were able to bury him alongside his siblings that very day.

“I guess with their beliefs and since there was no foul play, they didn't need to do an autopsy,” Ison said. “It was a relief we found him, but when I got that phone call, that was something else.”

Salmon added, “They didn't have to go through it again. I can't imagine having to bury four kids, then turn around the next week and bury another. So I'm glad we could do that for them.”

That kind of closure doesn't always happen in the fire and rescue business, according to Chief Ray.

“We go to the scene maybe of a fire and somebody is hurt or even killed in it, we don't always hear the outcome later. That's the way our job is,” Ray said. “A lot of times we live with 'what ifs and what happens.'”

If you ask Ison and Salmon, it wasn't anything they did — it was a team effort. From the knowledge of local firefighters to folks carrying their equipment through shin deep mud, everyone played a hand in finding that last child.

Ison said he's just honored he could be a part of it.

“If they'd just had us pack around equipment down there, I'd been more than willing to do it. All we wanted to was help,” Ison said.

Roger Evans passed away August 6. Funeral services will be Monday,August 10 at 11:30a.m. at Evans Funeral Home. The visitation will begin at 10:30a.m. on Friday at the funeral home. Masks must be worn per guidelines.