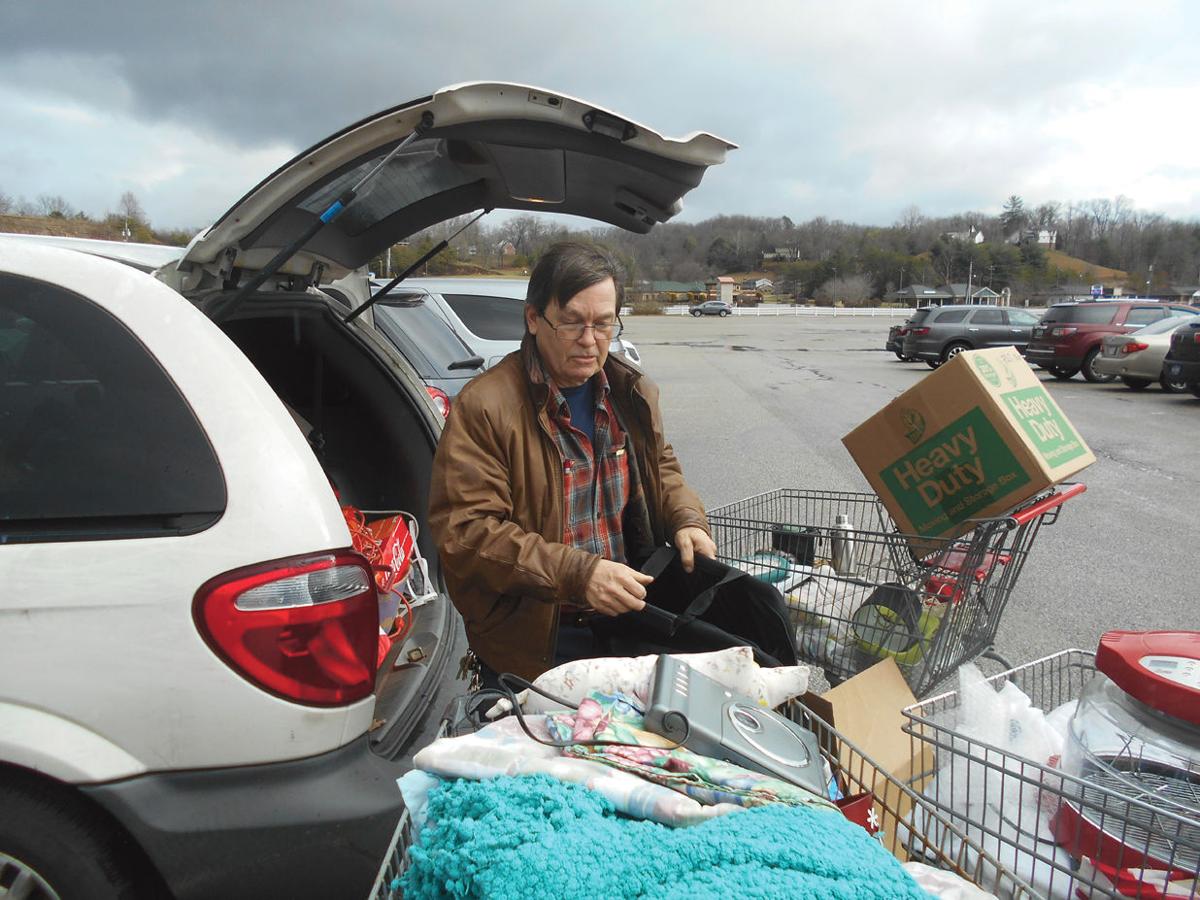 Steve Maynard of Cannonsburg loads his purchases into his car at the Kyova Mall parking lot. 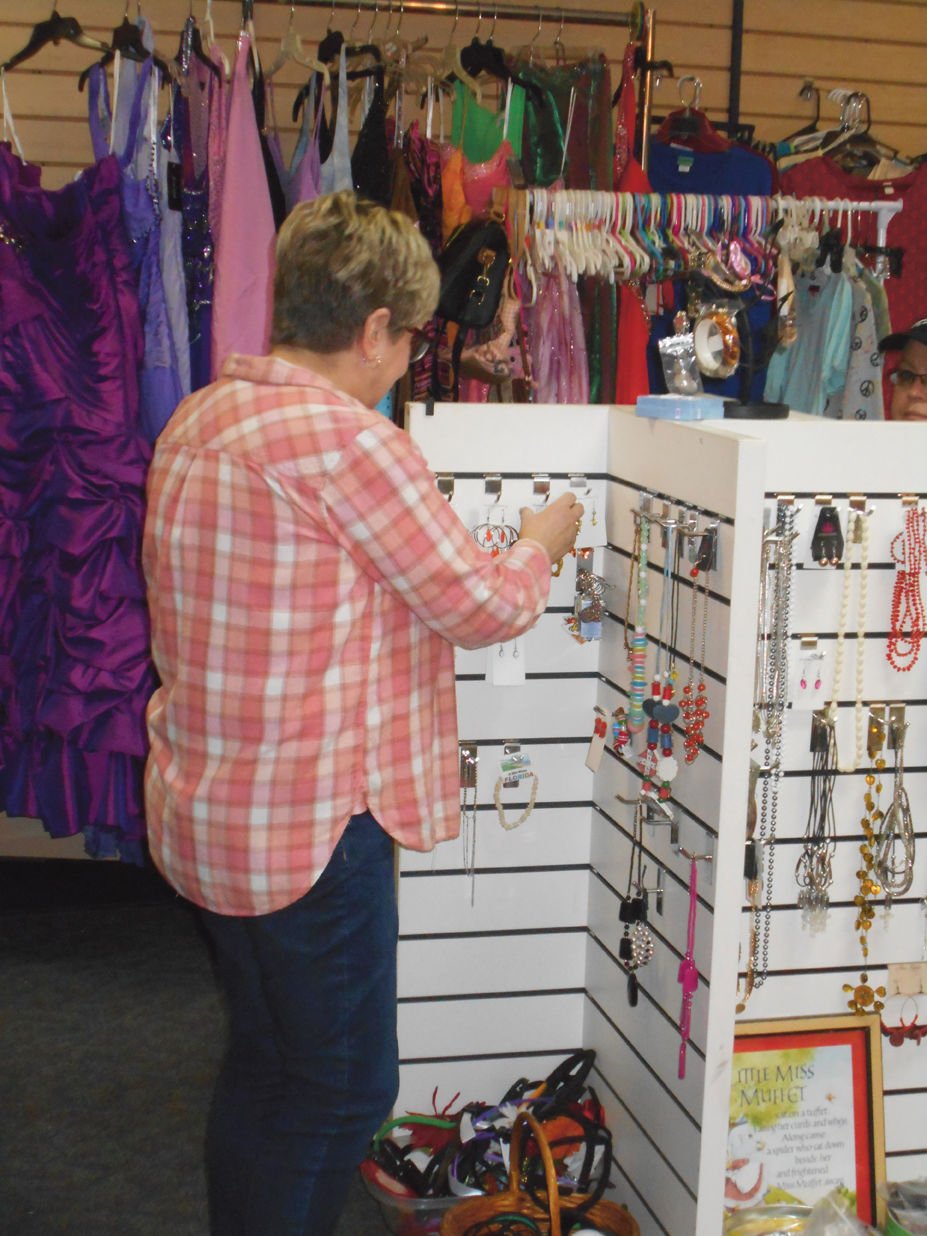 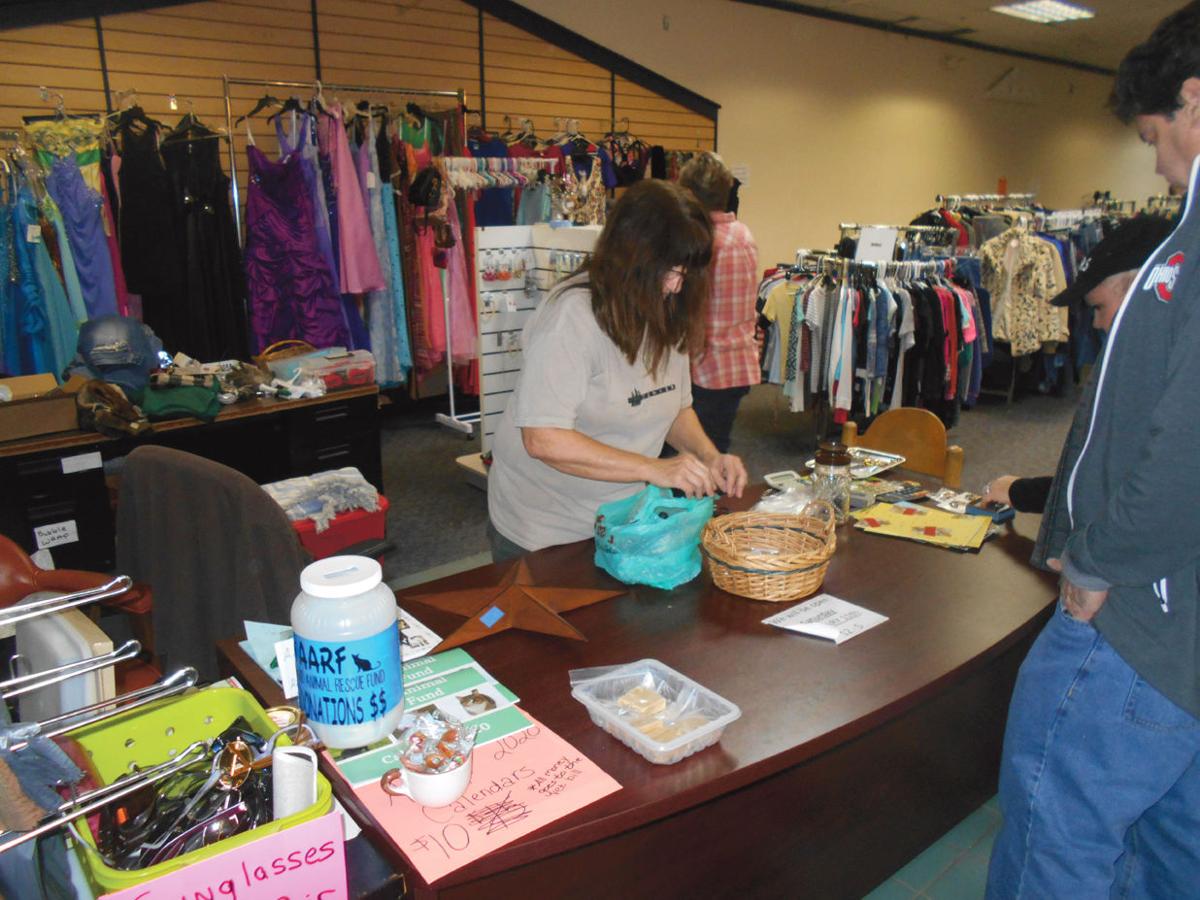 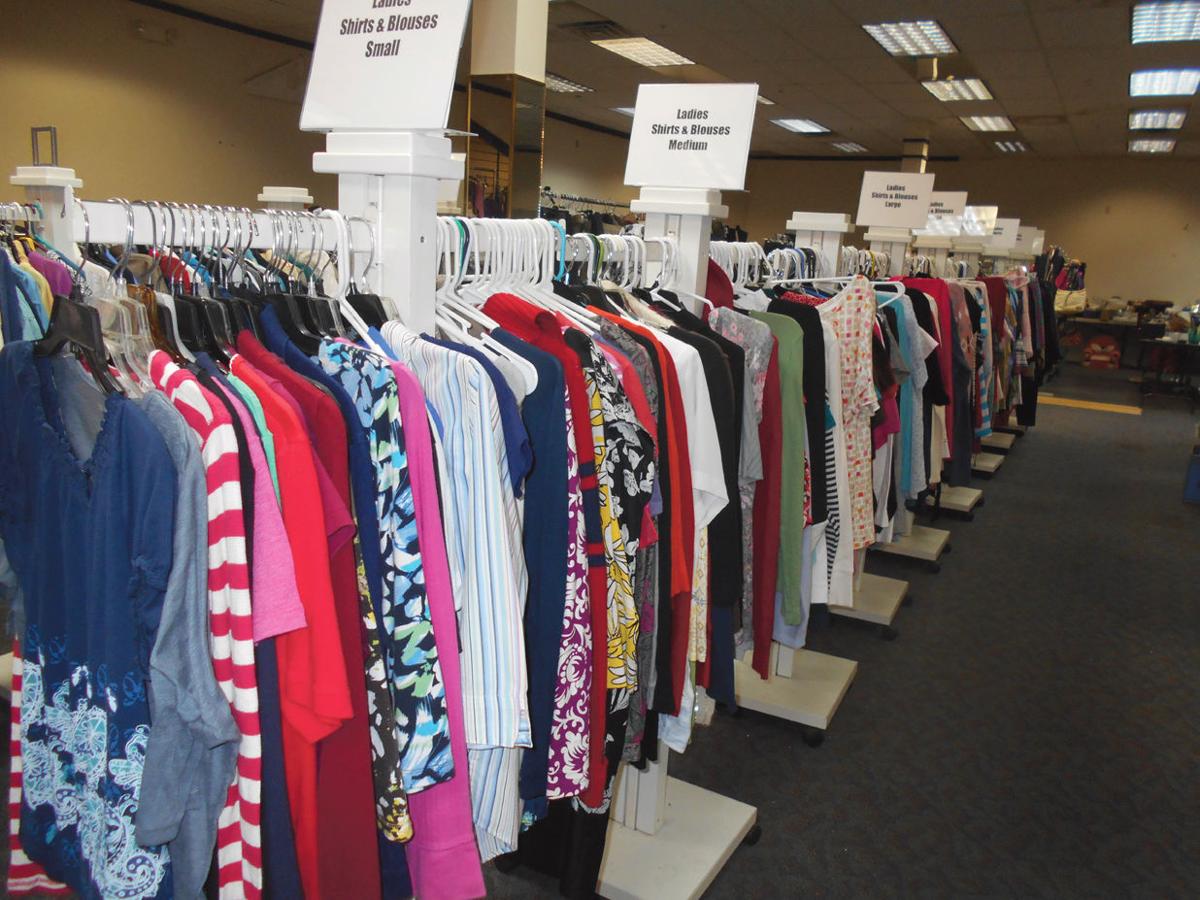 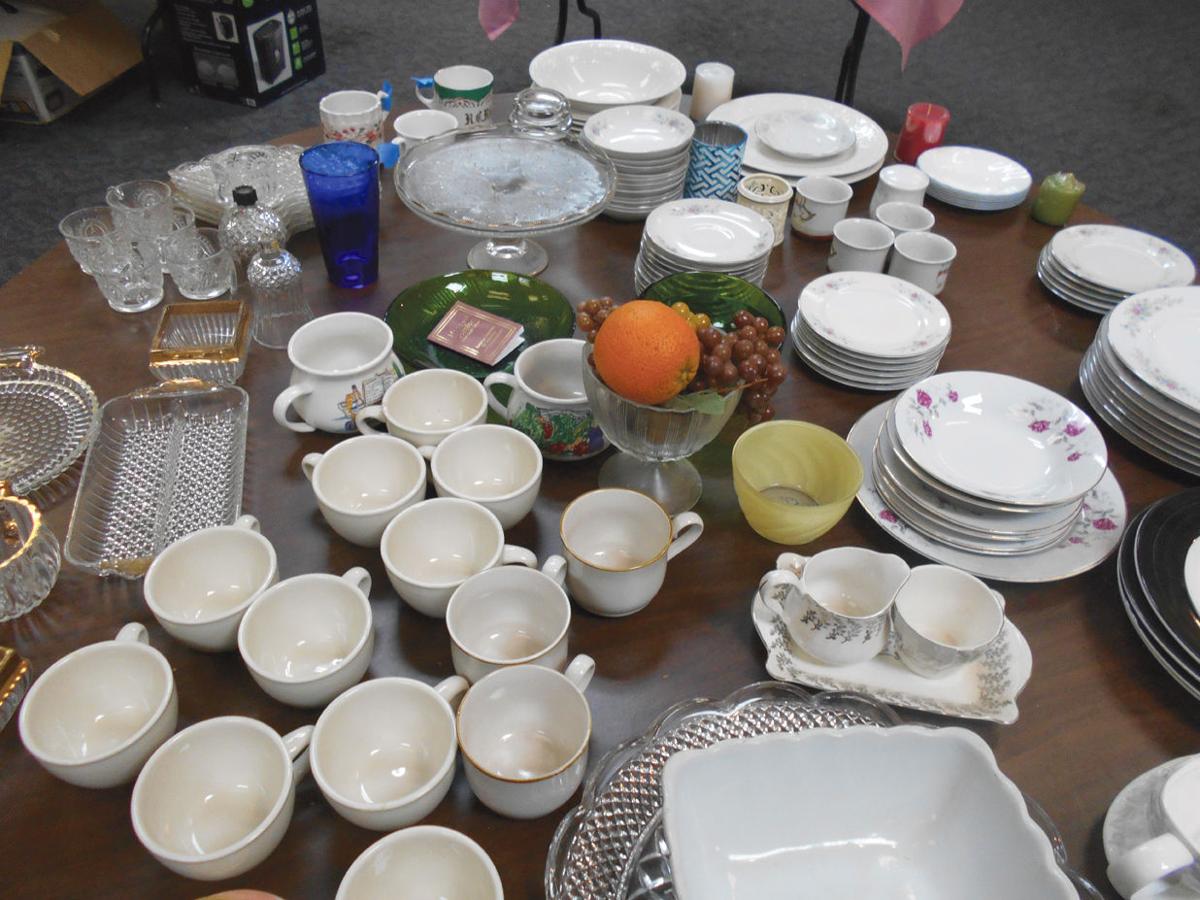 Some of the glassware for sale at the Wag ’n’ Tag Resale Shop.

Steve Maynard of Cannonsburg loads his purchases into his car at the Kyova Mall parking lot.

Some of the glassware for sale at the Wag ’n’ Tag Resale Shop.

CANNONSBURG Under a cloudy sky, Steve Maynard loaded several shopping carts of items — mostly material for sewing — into his car. He had struck the motherlode of bargains while shopping at the Wag ‘n’ Tag Resale Shop at the Kyova Mall.

“They’ve got better prices than anyone,” he said.

Wag ’n’ Tag is one of the fundraising projects of Ashland Animal Rescue Fund. Open on the first Saturday and Sunday of each month and an additional bonus Saturday to be announced each month, the store offers a wide variety of items, from clothing to glassware to appliances.

The store evolved from AARF’s yard sale, which happened once or twice a year, Jill Wymer, one of the volunteers who operates the store, said.

“When we found out that the mall space was available to hold our merchandise and that we would not have to move all unsold items out and then bring them back again for the next sale, we were elated. It was a true blessing,” she said. “It allowed us to consistently open the store and begin to build a reliable relationship with shoppers looking for bargains who also wanted to support our rescue.”

Wymer and her sister, Jonda McDonald, are seven-year veteran volunteers for AARF, starting by working in the kennel and gradually taking on other tasks.

The store is open on the first full weekend of each month. Wymer said it opens on a third day of the month, but that varies.

“We always try to make it in the middle of the month, but the day is typically determined by if we have volunteers available to work,” she said. “Everyone who helps at the Wag ’n’ Tag are volunteers, so we are at the mercy of our day to day schedules.” The third day of operation is posted on AARF’s Facebook page and a flier is placed in the store window.

She said those who operate the store are dedicated.

“We are lucky to have a great group of volunteers who are willing to give up their weekends to come in and lend a hand,” she said.

All of the profits of the store go toward the care of the animals, Wymer said, including vetting, medications and food.

Profits vary from month to month, largely depending on the donations.

“When we receive large value items, such as furniture or collectibles, our monthly amounts are, obviously, more,” she said. “It is safe to say we take in an average of $500 to $600 on a full weekend.”

“We were all incredibly excited and thankful,” she said. “This meant we could open the room more often, provide consistency and not have to move donations in and out every time we wanted to have a sale.”

Wymer said she and her sister were taught to be compassionate and she said she believes that has helped lead them to volunteering for AARF.

“Both our mom and our dad showed us by example how important it is to help those in need and we do as much as we can to help both our four-legged and two-legged friends,” she said.

“It is incredibly humbling to be involved with animal rescue. There were days that I would walk into the AARF kennel to help clean and look around the room and realize that most of the animals that were there would be dead without having someone step up and rescue them. It is very moving to know that, with the help of like-minded volunteers, we are able to work as a team to help so many animals.”

Donations for the store are accepted Friday evenings before the store is to open on Saturday and Sunday. Donations will be accepted during store hours, too.

Wymer gives credit to the volunteers who help operate the store.

“We definitely couldn’t do it without all the help, especially over the last year,” she said. “Our mother has been very ill and we have been unable to spend as much time volunteering as we would like, and others have stepped in and filled our roles while we are away. We are blessed with compassionate, animal-loving volunteers.”

Tammy Millet of Rush shopped at the store before becoming a volunteer.

“It’s a great place to get good bargains.”

Charlotte Gifford of Grayson, who has three dogs, has retail experience: She owned Gifford’s Outdoor Shop for 22 years.

“My sister-in-law helped with the store,” Gifford said. “She’s a friend of Jonda’s.”

City of Ashland retiree Teddi Bragg was a volunteer for AARF and began working at the store because workers were needed.

“We just do whatever we’re needed to do,” Bragg said. “