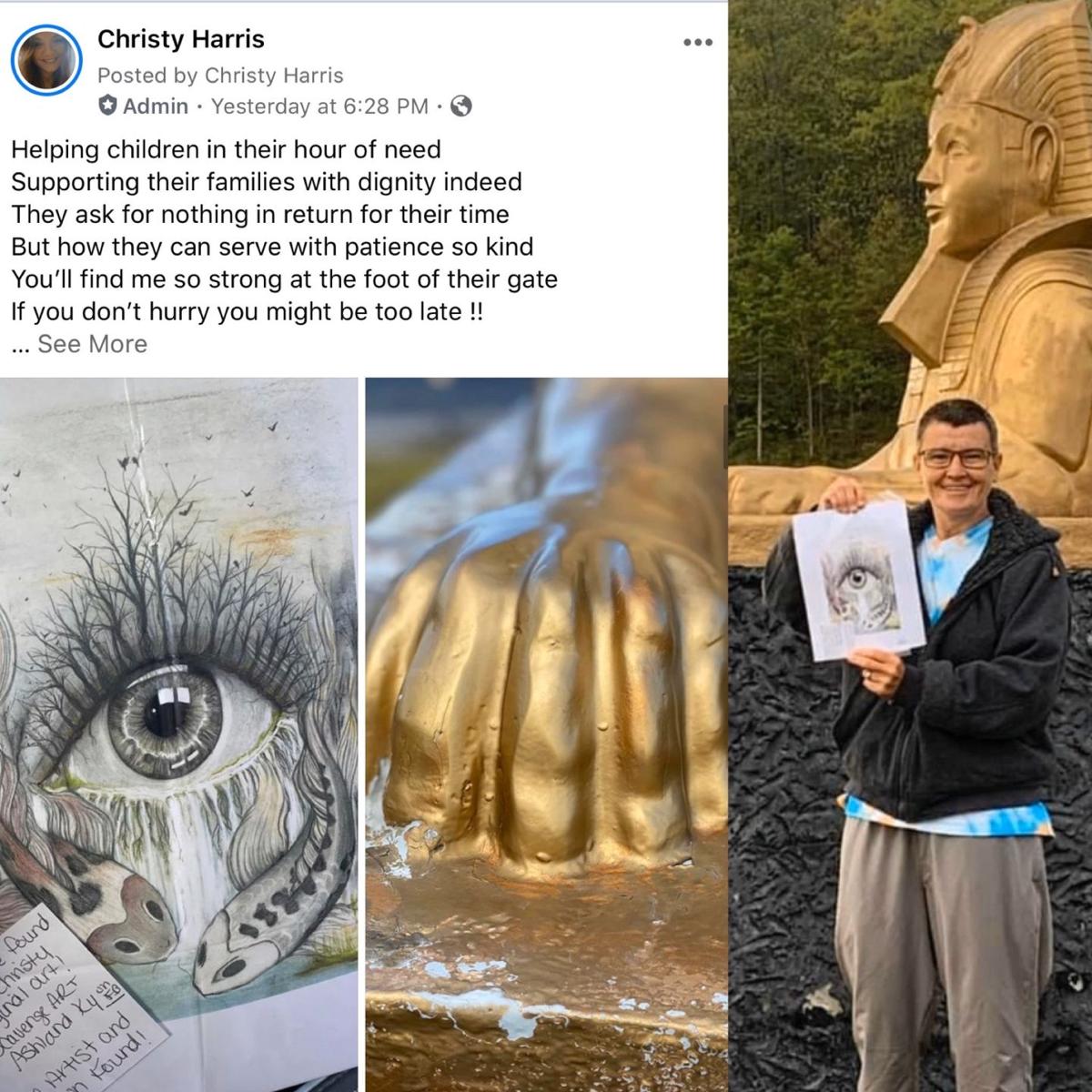 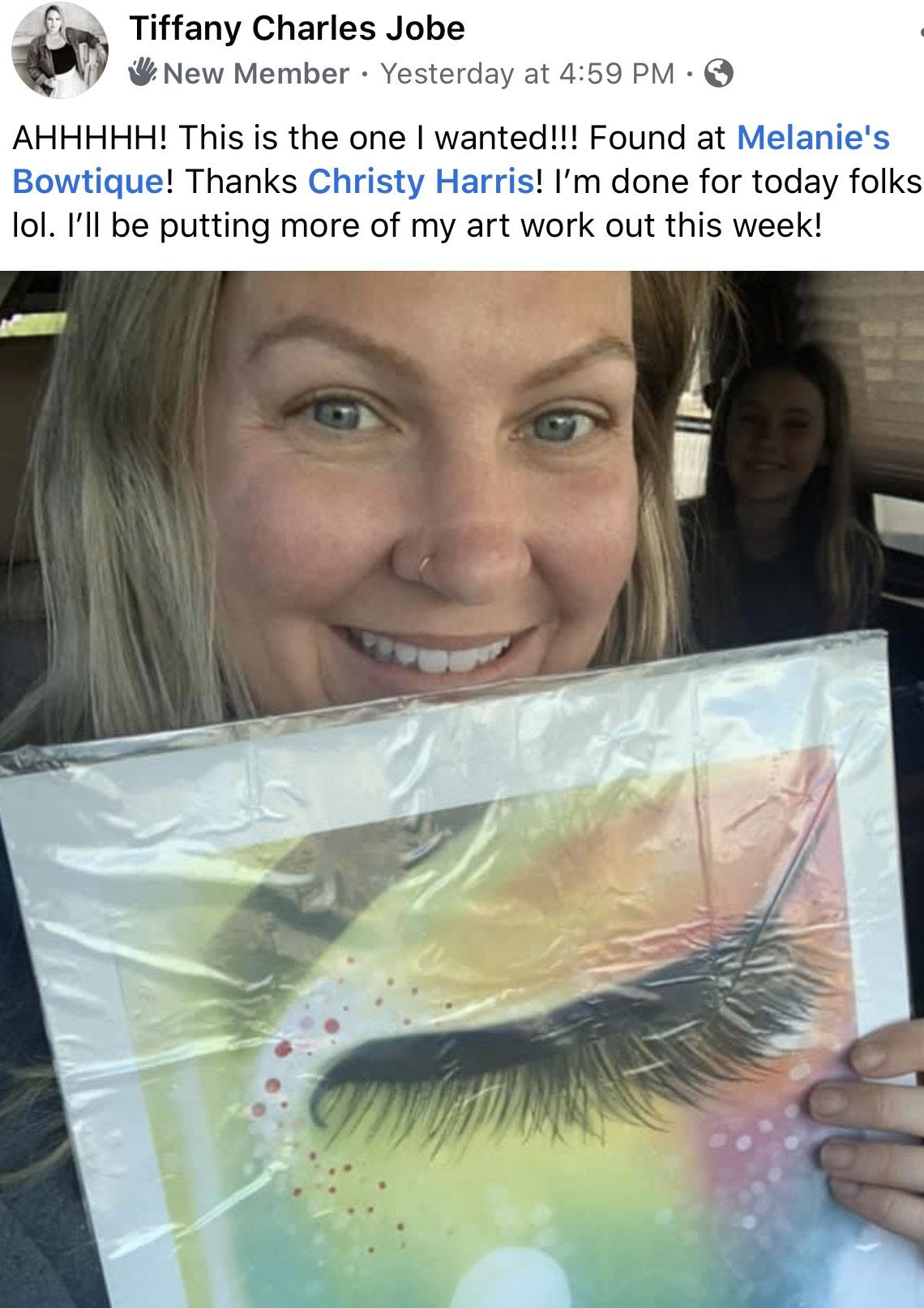 Tiffany Jobe, who is an artist that also has hidden work, finds work byChristy Harris. 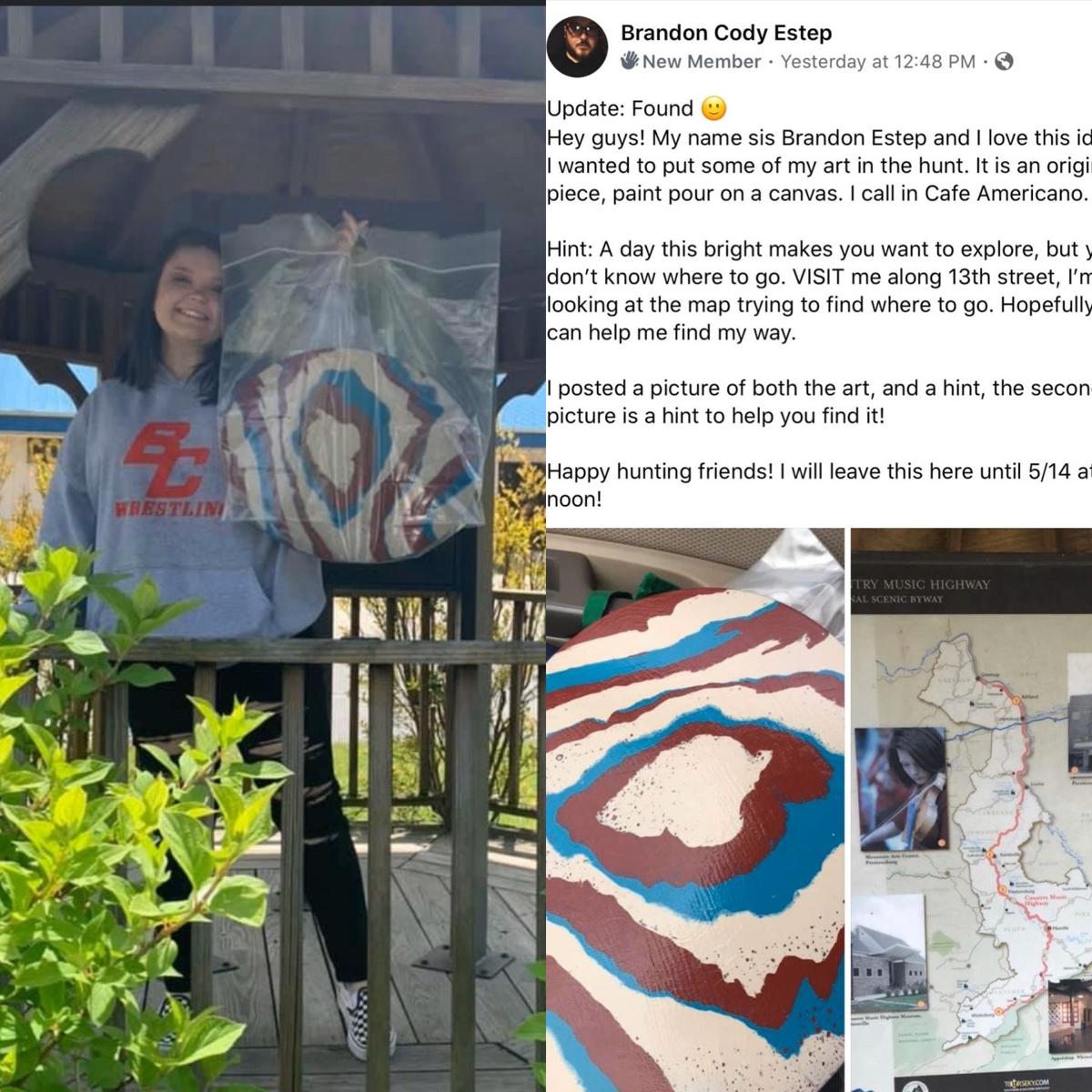 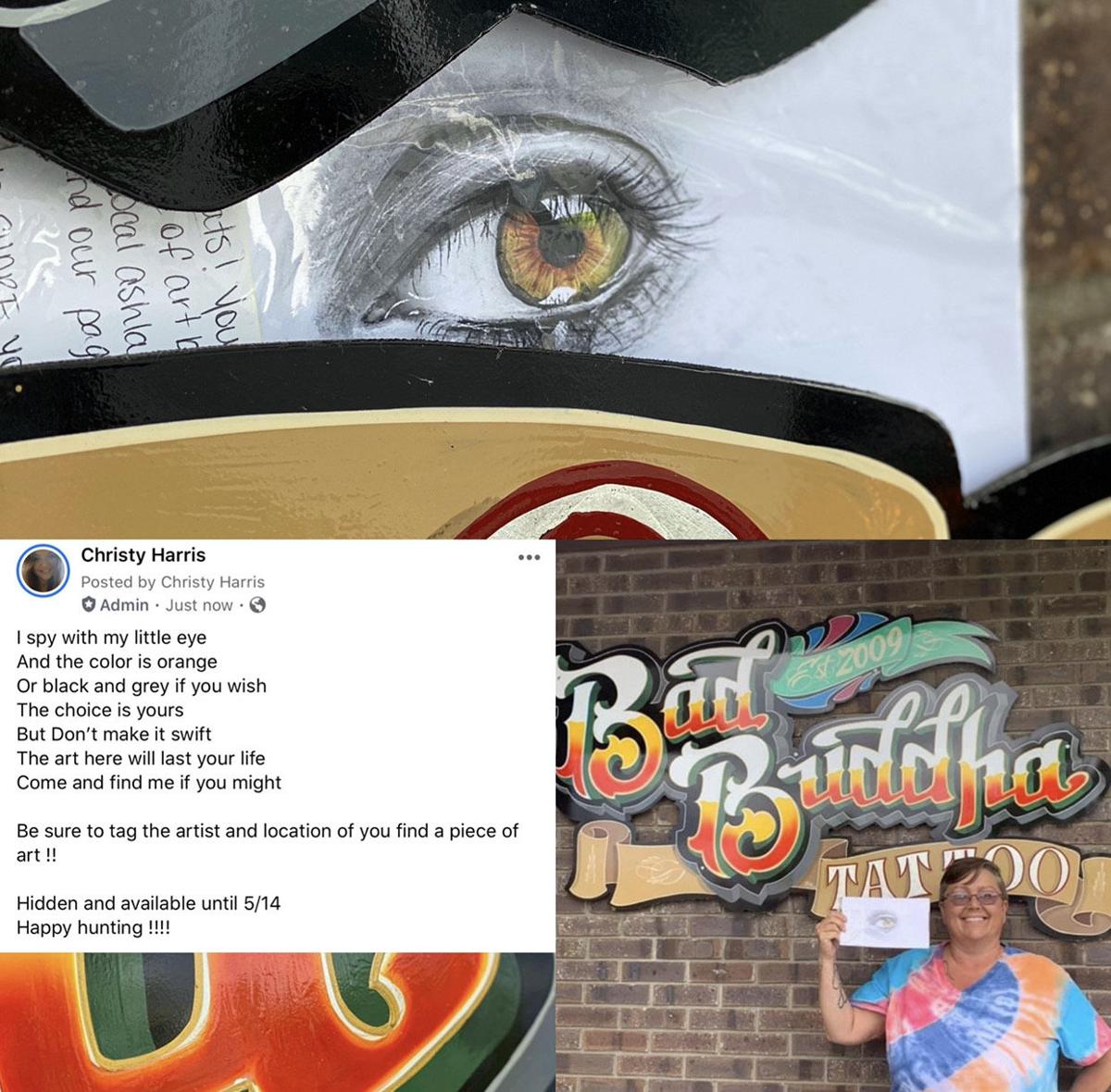 Mitzi Fields with found artwork by Christy Harris that washidden in front of Bad Buddha Tattoo. 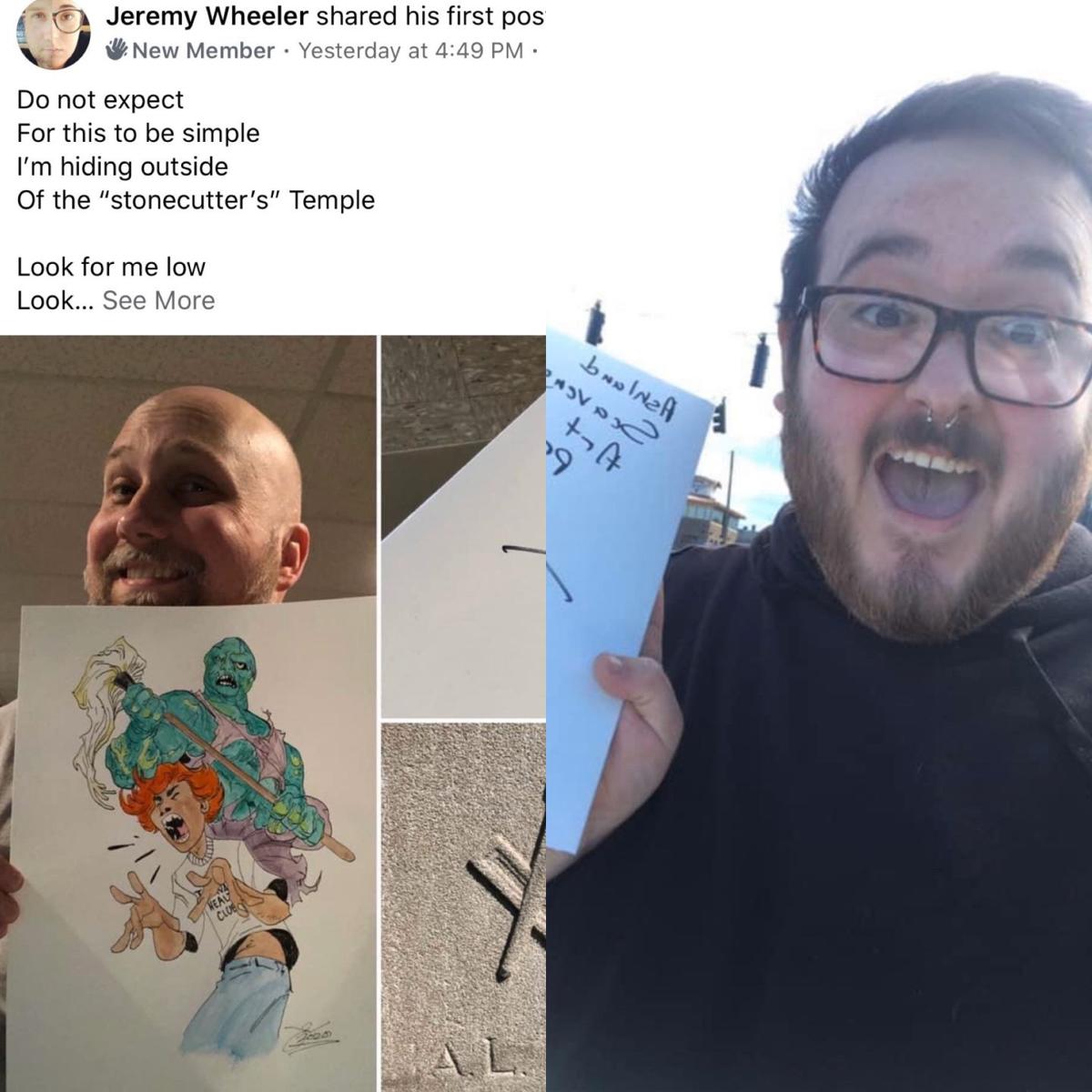 Pictured on the left: Artist Jeremy Wheeler and his artwork he hid. Right:

Tiffany Jobe, who is an artist that also has hidden work, finds work byChristy Harris.

Mitzi Fields with found artwork by Christy Harris that washidden in front of Bad Buddha Tattoo.

Pictured on the left: Artist Jeremy Wheeler and his artwork he hid. Right:

ASHLAND Local artist Christy Harris has combined arts, crafts and adventure in a new project for the Ashland area, and it’s getting a great deal of support.

Called Scavenger Art (Greater Ashland Area) on Facebook, artists are asked to choose some of their own art, tag it with their name, Facebook information and group information, wrap it in weatherproof packaging and place it throughout the Ashland area. Then, post to the group.

Artists are to give hints about the art they’ve hidden and include the dates and times the hunt will last, as well as how many pieces were placed in that location.

If the work isn’t claimed within the length of time specified, the artist must retrieve the work.

If you’re a seeker, you must tag and share the artwork to the group and credit the artist. Also include a picture of where you found the art so the location or business can get credit, too.

With the help of her family, Misty Fields, 41, of Summit, has found 10 pieces.

“One of my favorites is by Tiffany Jobe and I found it at Hope’s Place,” she said. “It was on canvas and it’s splash art.

“I also liked a picture of an eye with koi coming around the sides by Christy Harris,” she said, adding she found it at the El Hasa Shrine Temple.

She said she stumbled onto the project on Facebook.

“I love art and I love scavenger hunts,” Fields said. “I was looking for something to do and this just seemed like a lot of fun.”

She’s not the only one who thought it seemed like fun.

Harris started Scavenger Art more than a week ago and, within an hour, someone had hidden a piece of art and it had been found. Since last week, the web page has accumulated more than 400 members and more than 15 pieces of art have been placed and found.

The idea for a scavenger art project was original.

“It just came to me,” Harris said. “I just thought it would be fun to promote the arts and local business. We’ve had to change the way we entertain each other, but this is still following social distancing guidelines.”

Harris said she tells artists if they’re placing a piece at a business or agency, to make sure the offices are asked first. Most pieces will likely be placed outdoors.

Seekers get to keep whatever they find. It’s not just art that’s being sought. Crafters who make tie-dye items, candles, key chains and other handmade items are encouraged to participate.

Harris said the goals are to give people something to do while giving some visibility to artists, crafters, businesses and nonprofits.

“It’s fun for the artists. I put out nine pieces of art in the past two days and any time someone finds it, it’s exciting,” Harris said. “They’re like, ‘Look what I found!’ and hopefully, they appreciate the work.”

She said the scavenger art hunt will last as long as people in the area are interested.

“There were several of us chasing a piece at midnight,” Fields said. Although she didn’t win that one — a painting of Jerry Garcia — she isn’t about to quit.

“I’m going to keep going,” Fields said. “As long as people are putting stuff out there, I’m gonna search.”