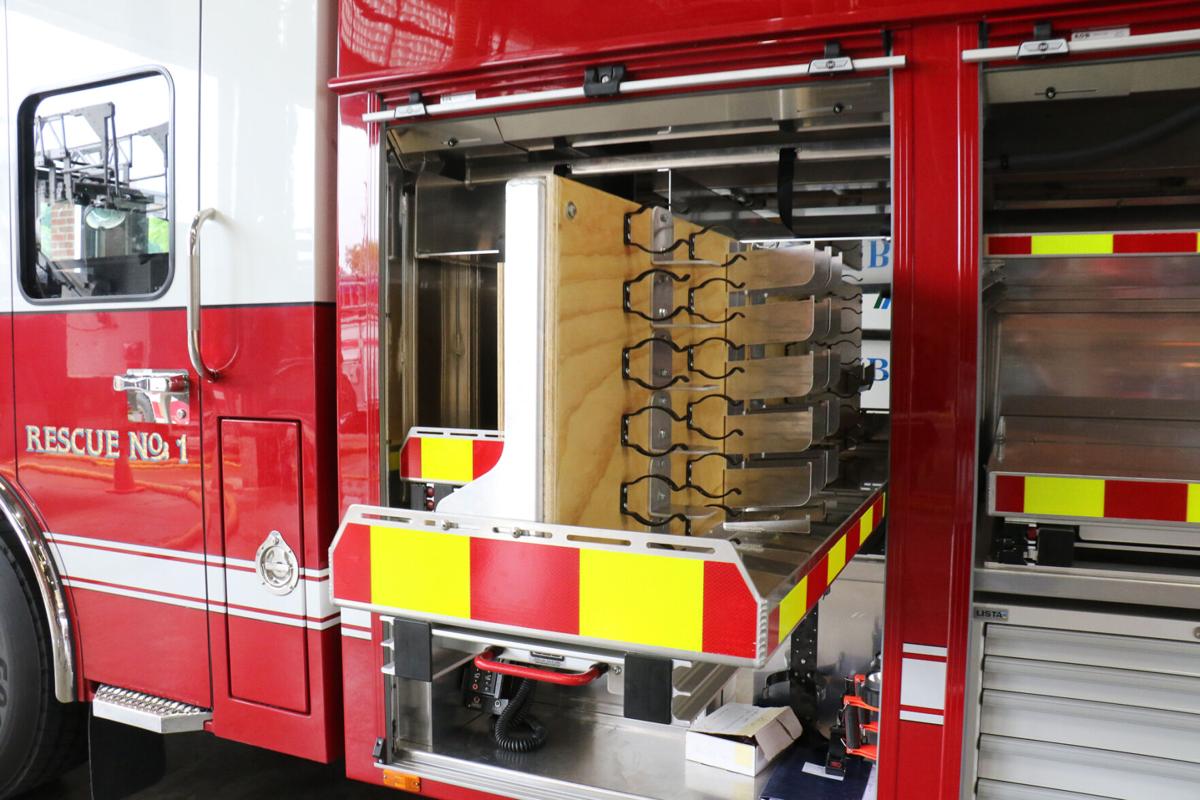 Matt Jones | The Daily Independent Some of the storage on the new rescue truck. 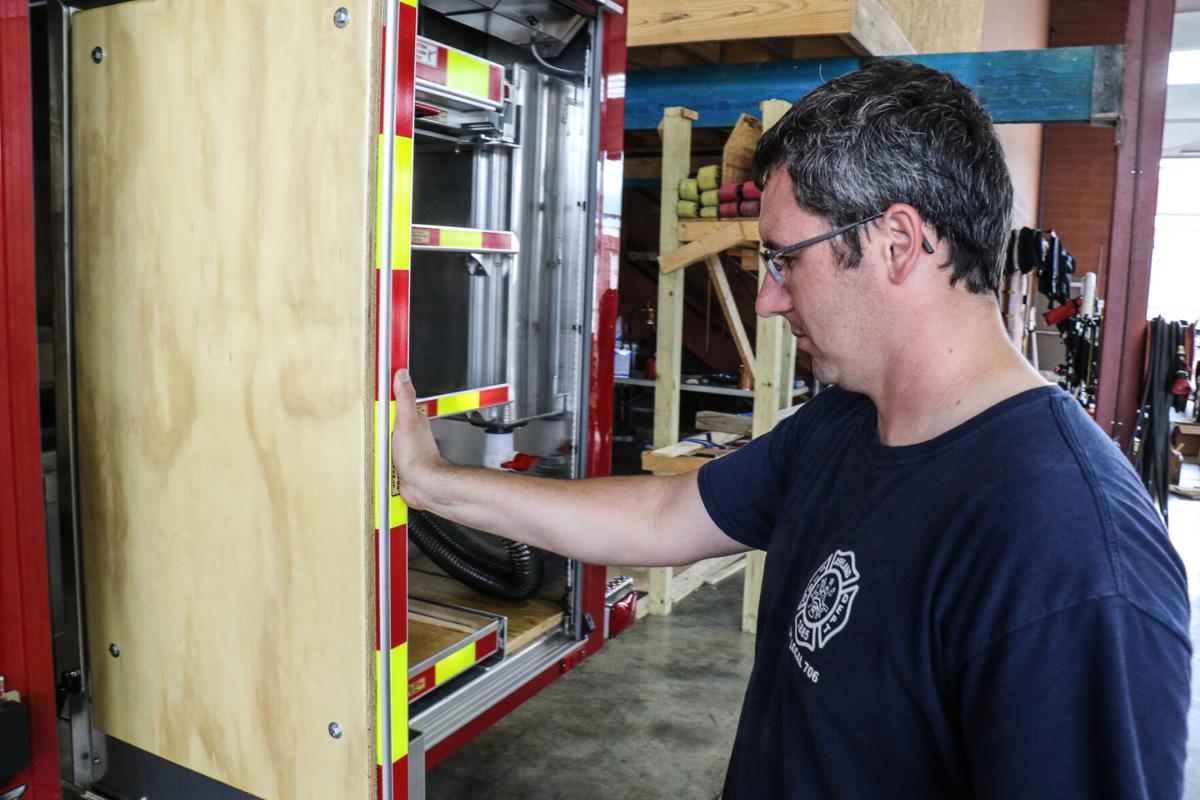 Matt Jones | The Daily Independent Ashland Fire Department engineer Todd Selvage shows off one of the bays on the new truck. 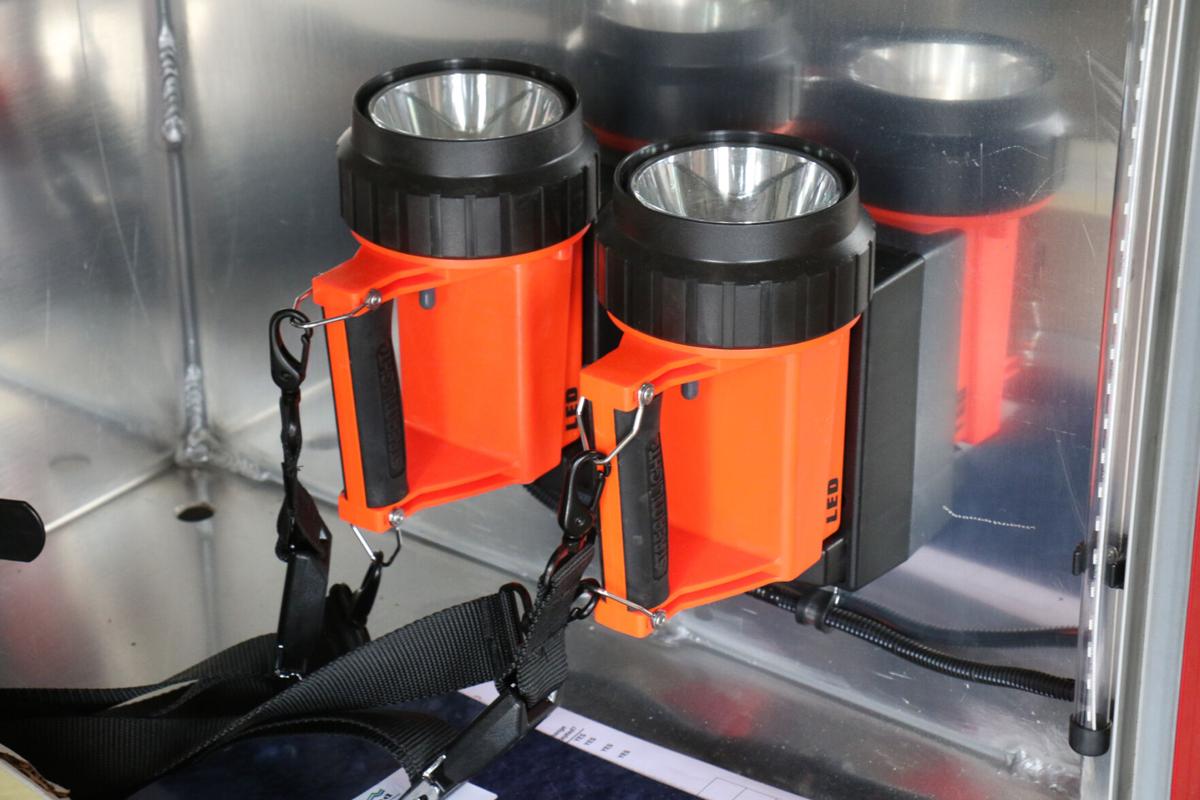 Matt Jones | The Daily Independent Streamlight flashlights sit on chargers waiting for the rest of the new truck to be loaded out. 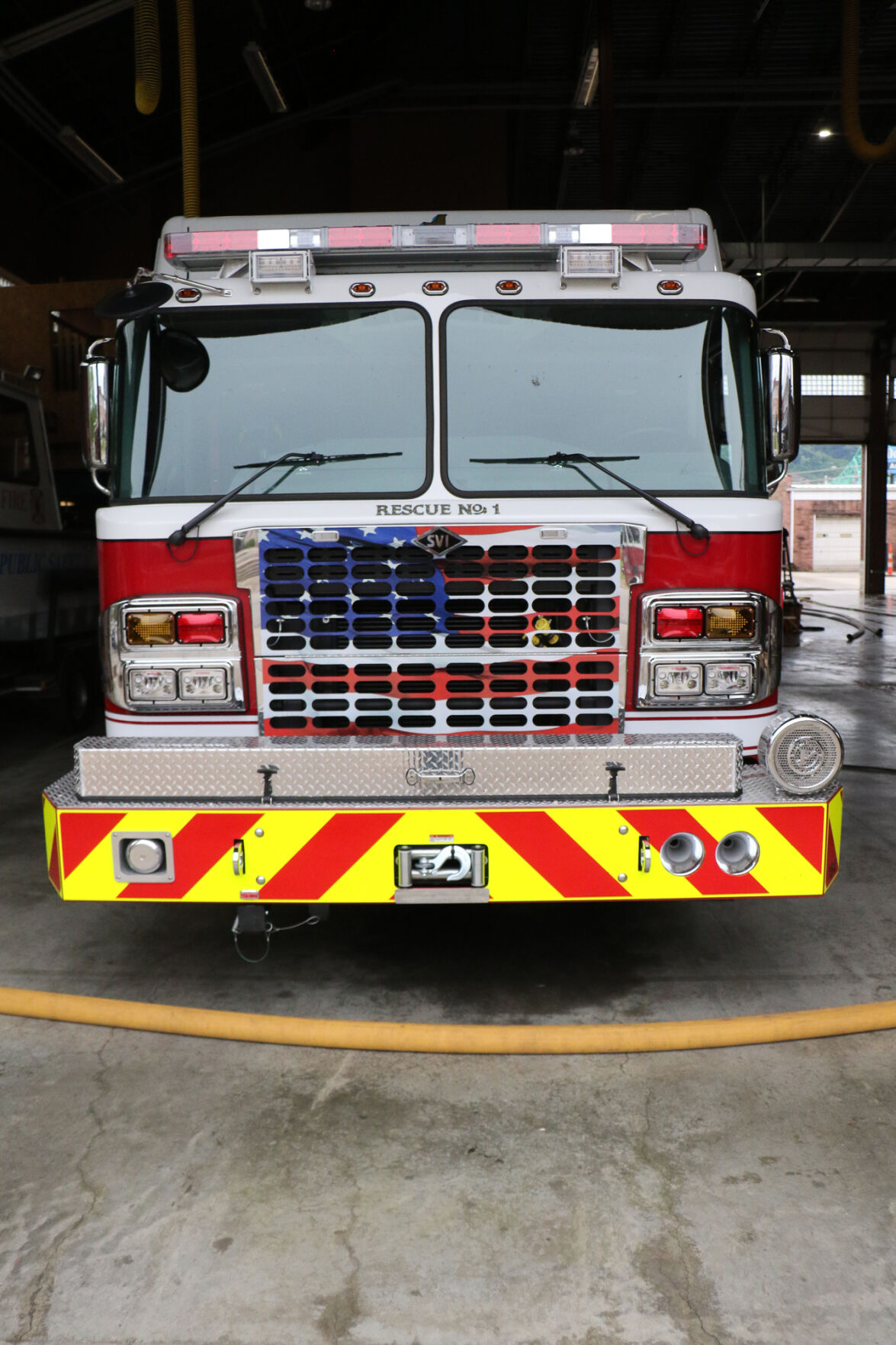 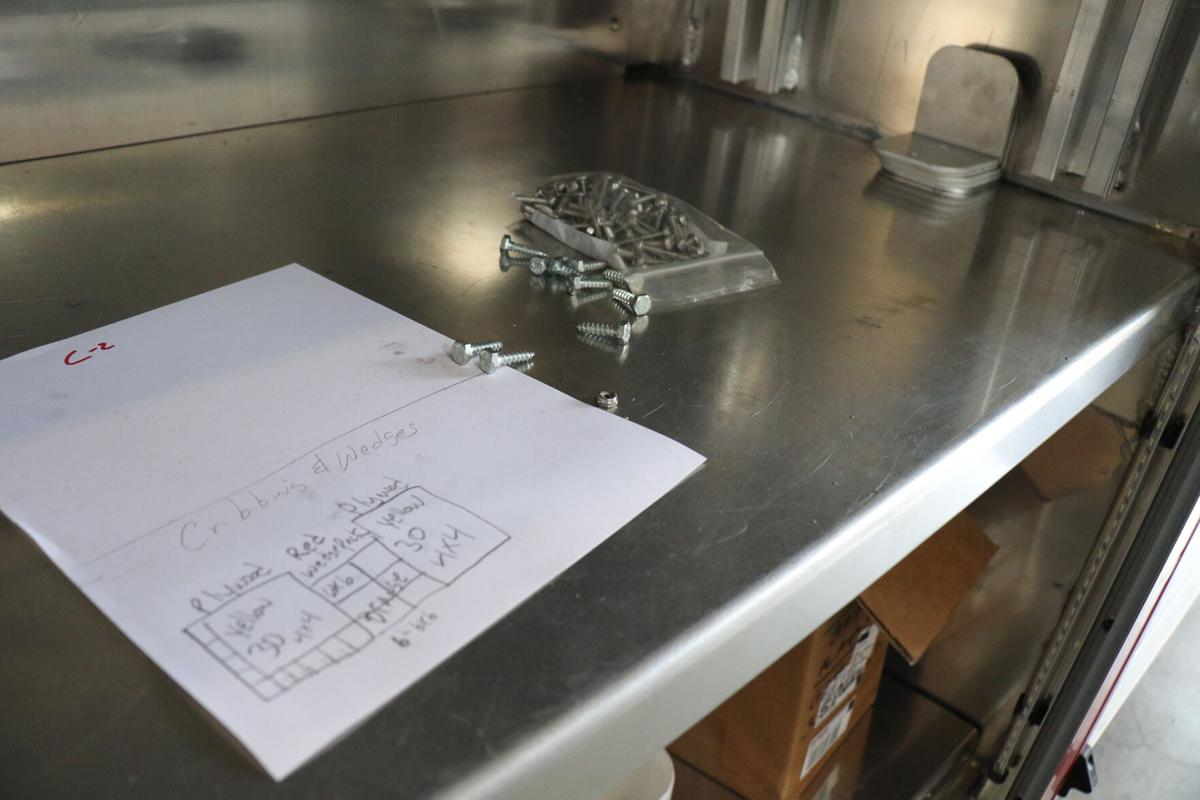 Matt Jones | The Daily Independent Plans for the buildout of one of the storage bays on new truck are seen at Ashland Fire station on Wednesday. 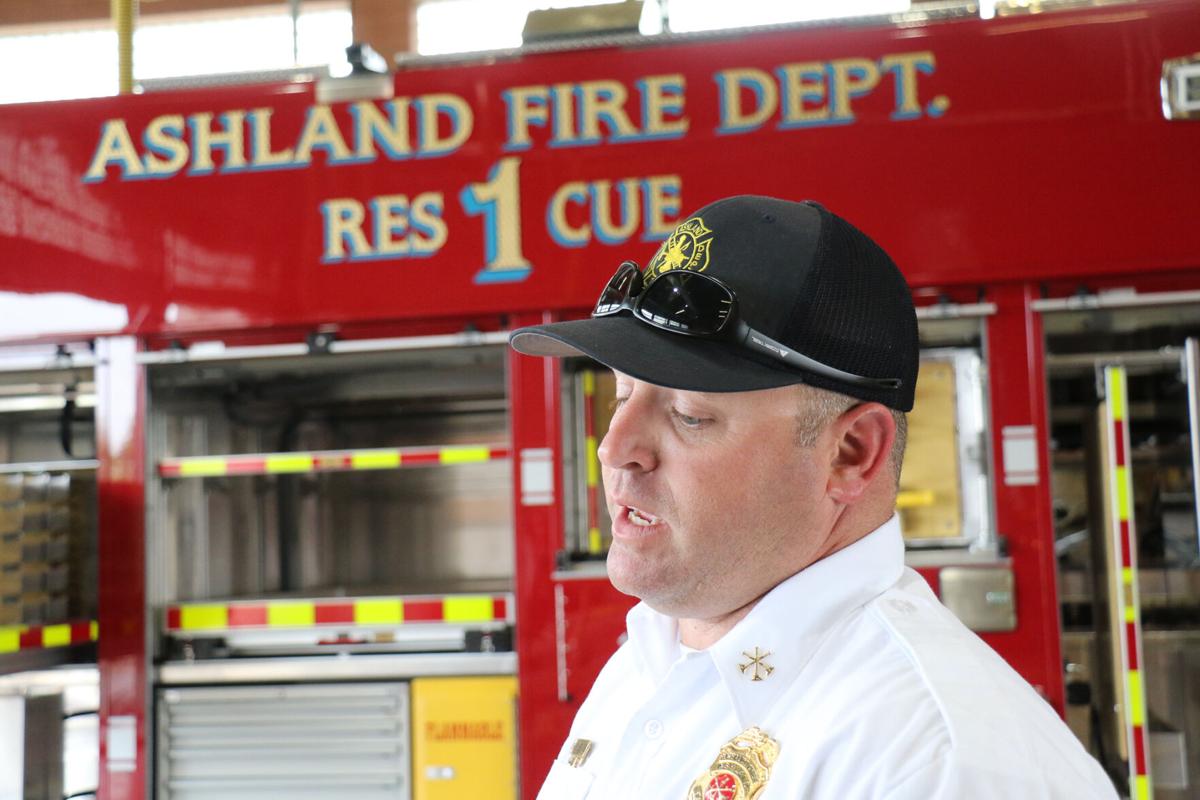 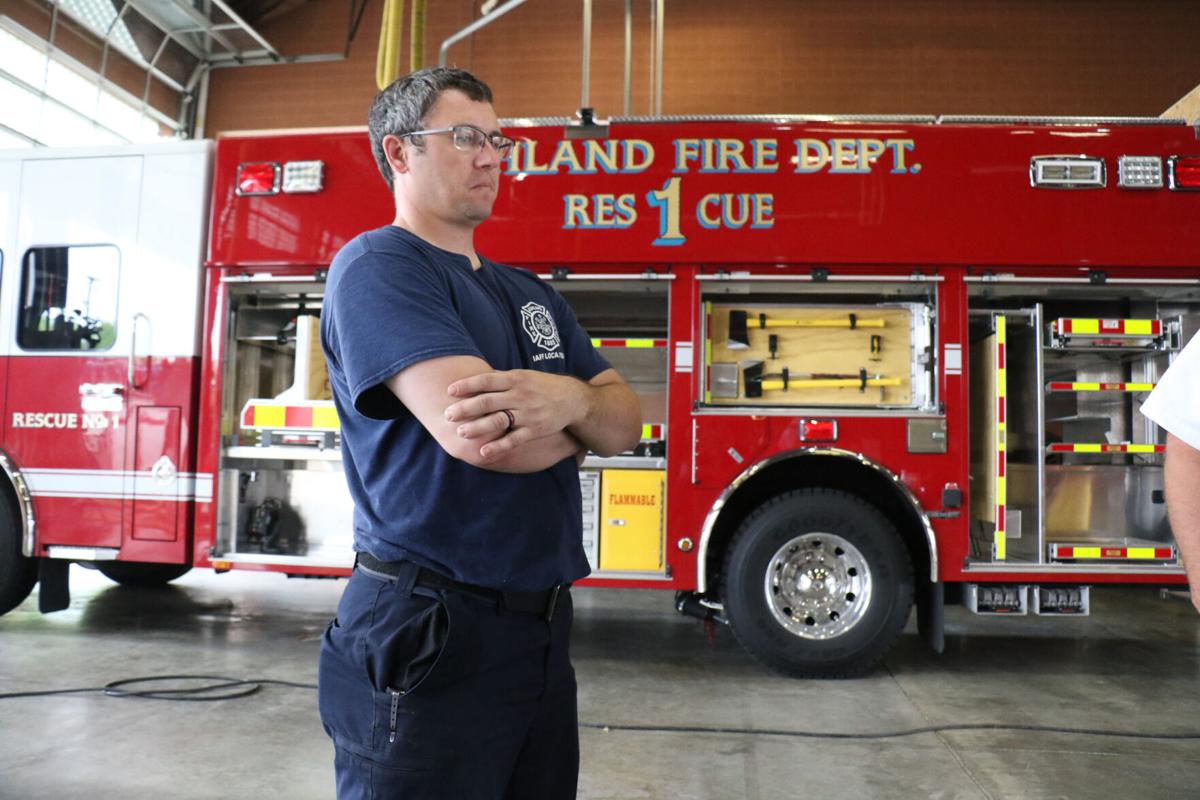 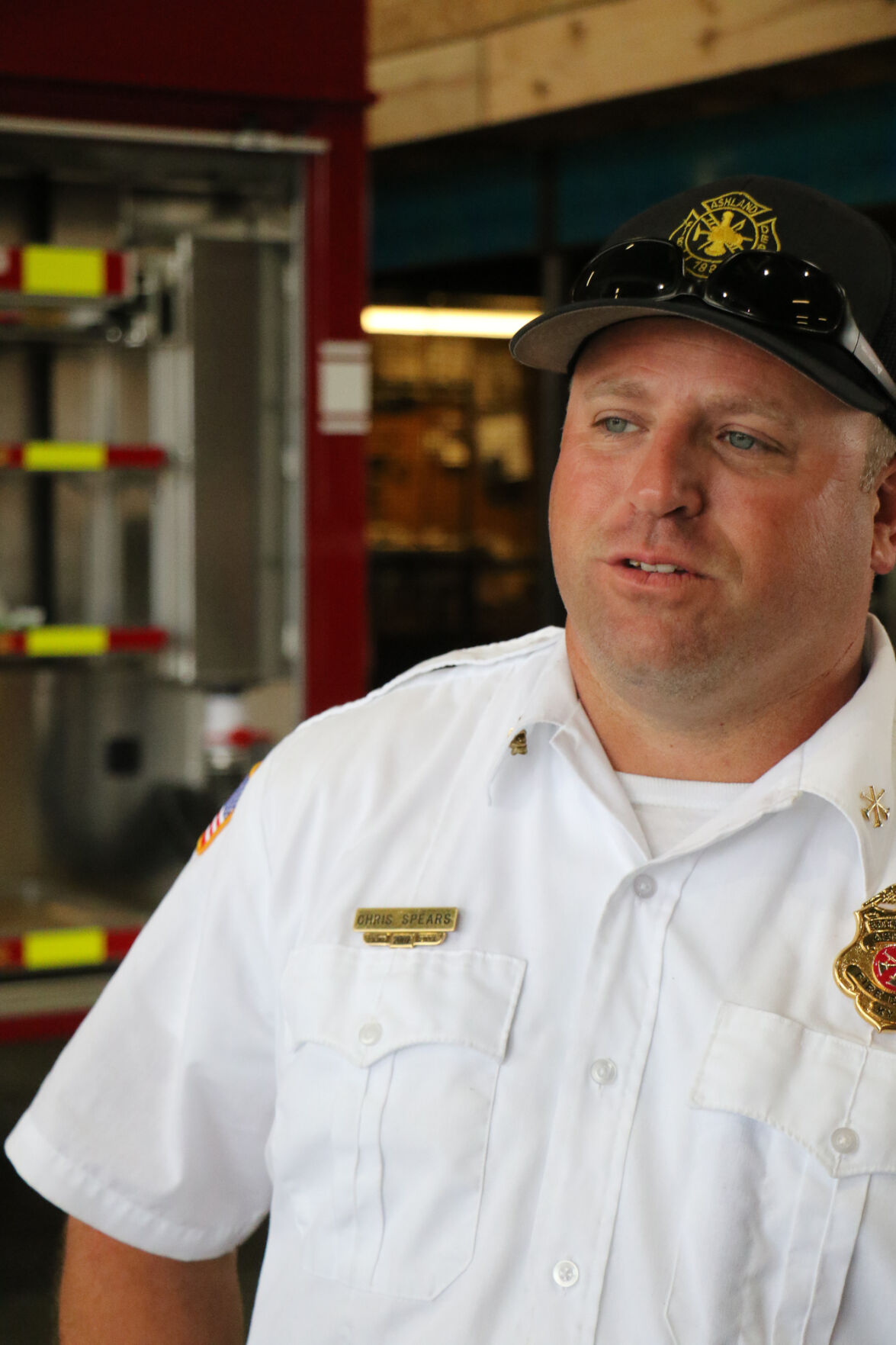 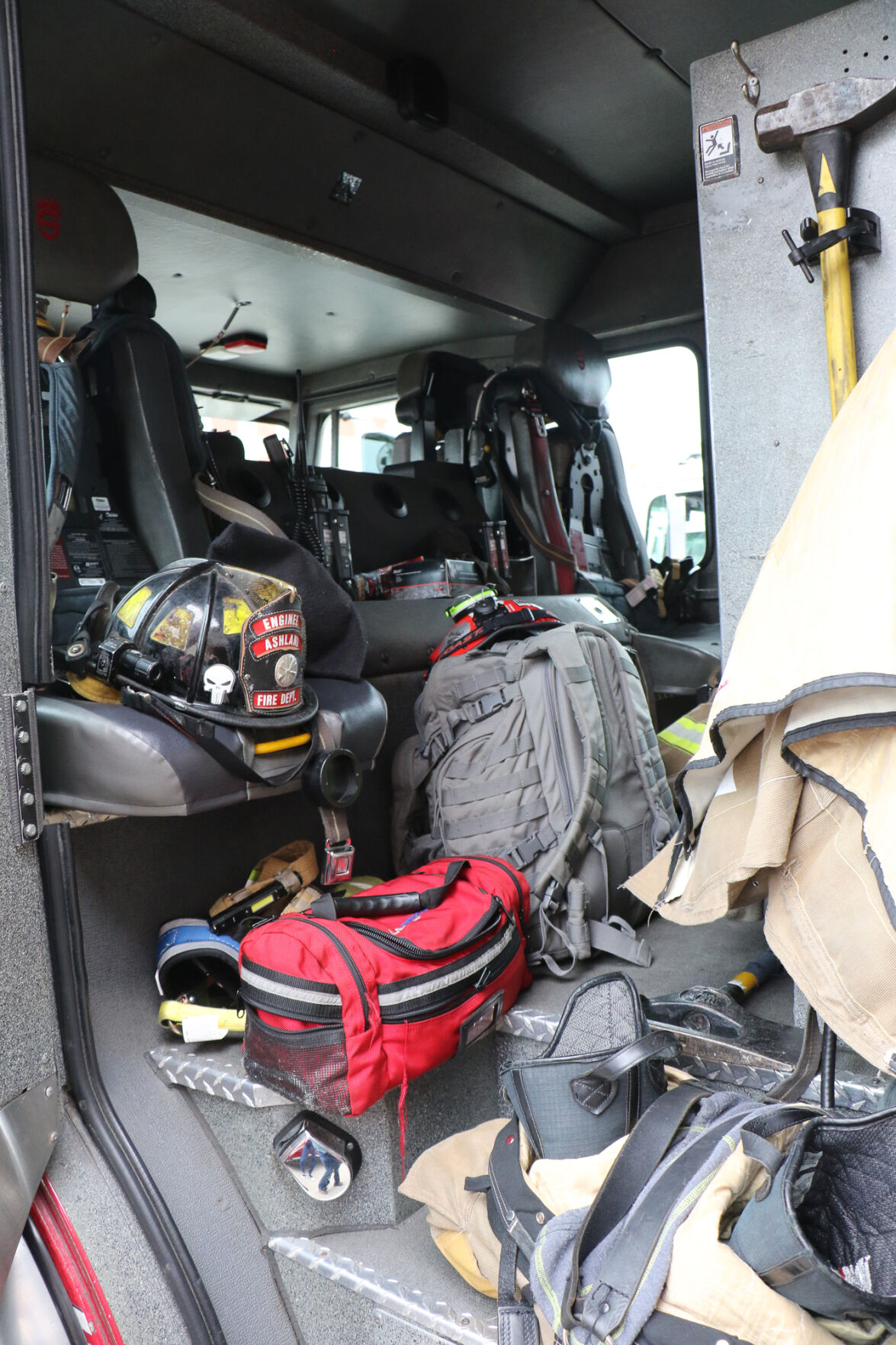 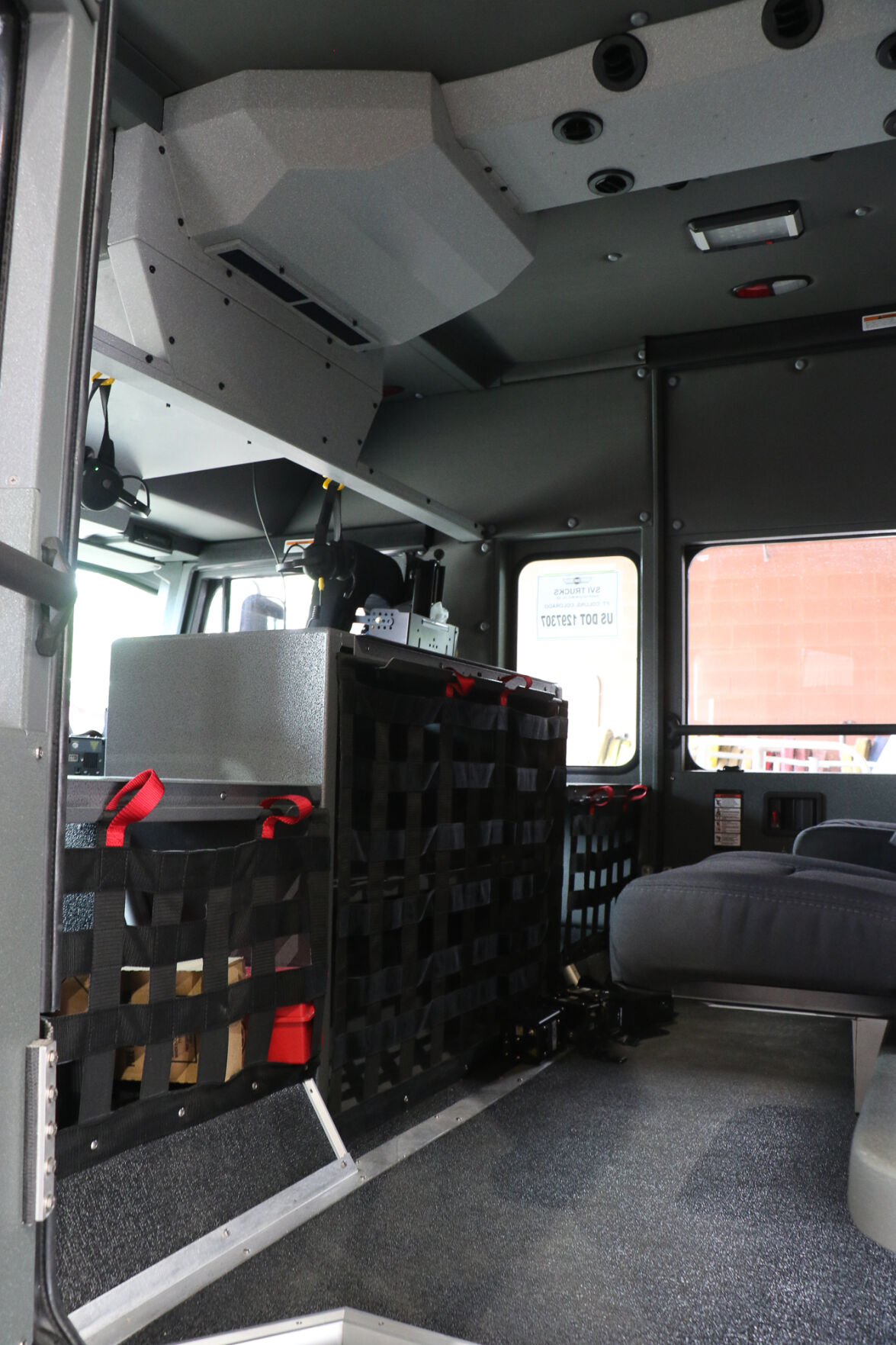 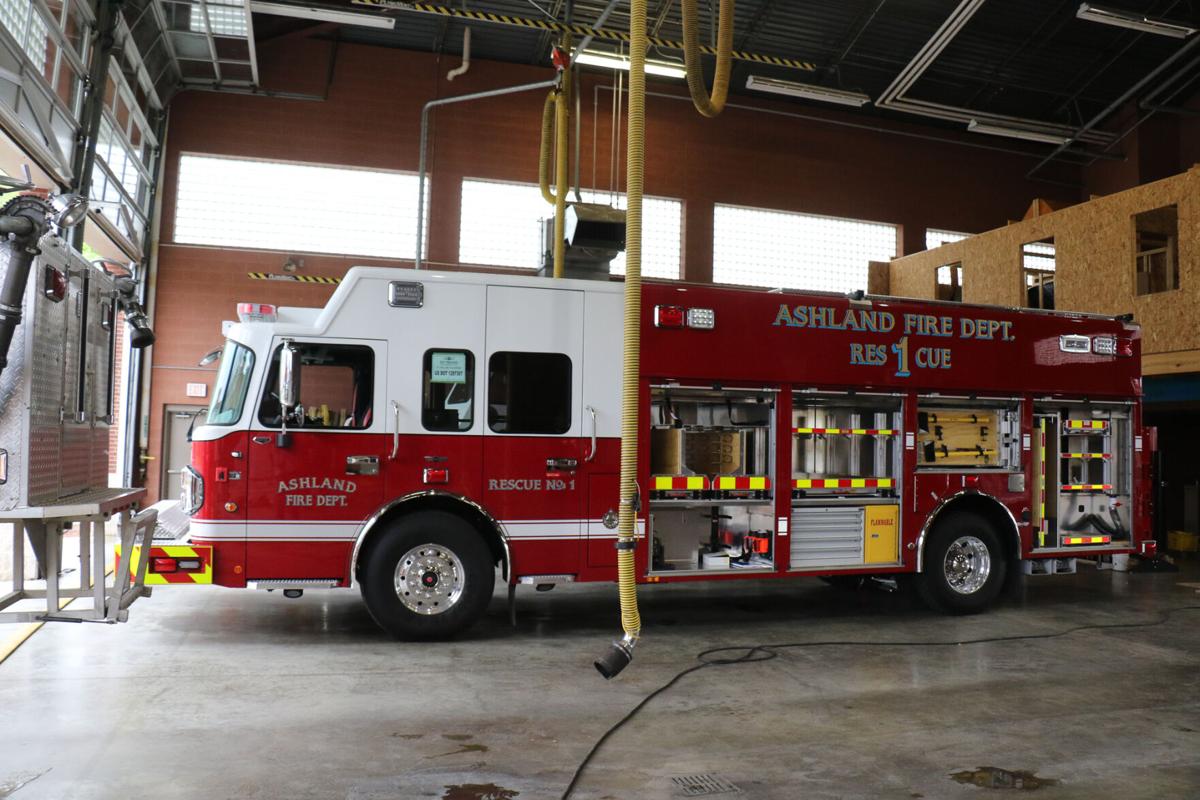 Matt Jones | The Daily Independent Some of the storage on the new rescue truck.

Matt Jones | The Daily Independent Ashland Fire Department engineer Todd Selvage shows off one of the bays on the new truck.

Matt Jones | The Daily Independent Streamlight flashlights sit on chargers waiting for the rest of the new truck to be loaded out.

Matt Jones | The Daily Independent Plans for the buildout of one of the storage bays on new truck are seen at Ashland Fire station on Wednesday.

AFD is on Year 4 of its rescue program and now has the truck to match. AFD firefighters have completed training in eight rescue disciplines thus far.

The department has been using an old engine with added boxes on top to store their rescue equipment, said Chris Spears, battalion chief.

“This truck’s busting at the seams,” Spears said of the converted engine.

The engine was reimagined to help the rescue team, and the department looked at the feasibility and need for a rescue truck.

“Over the last four years we’ve found, yes, we do have a need for this type of vehicle, this type of service in the city,” Spears said, adding that they have seen an increase of calls in the specialty areas.

The department scoped out rescue trucks across the country at different departments and conferences over the years. AFD determined what it needed and what would be most beneficial for the department and city. The rescue truck was customized to best help the rescue program assist Ashland.

The old engine wasn’t ideal — it was cramped and crowed with equipment; the crew on the engine would have to climb the back of the truck in all conditions and carry the heavy equipment down, which poses a hazard for the rescue team.

The new engine has storage, storage and more storage. The truck also has stairs up the back for the men to get in and out of the containers on top, a huge highlight for the crew.

Spears and Todd Selvage, an AFD engineer, said the four biggest highlights of the truck are the elevated light tower on top, the tall cab, tie-off points and two winches.

“That’s probably the biggest highlight of the truck for us is our elevated light tower,” Selvage said. “It will definitely be a game-changer on the scene.”

The light tower will provide the closest thing to daylight on scene during overnight hours or other dark situations.

The tall cab will allow for proper storage and everyone to ride facing forward. It was customized to be tall enough for the crew to stand and change into wetsuits or other gear on scene.

There are tie-off points on all sides of the truck that gives the crew a high-point system when a car is over a hill, Spears explained.

There is a winch, much like that on a wrecker, on the front of the truck, just under the American flag grill. Another is located the back and can be used from different points on the truck.

The winch in the back will come in handy most often when a car is over an embankment or someone drives up the side of one of the area bridges. The crew will be able to stabilize the car in distress, so the firefighters can safely remove any victims without the car moving further down the hill or more towards the edge of the bridge.

The truck has an added benefit of cameras to show blind spots when the driver turns on the turn signals.

The new rolling toolbox totals just under $700,000, which was purchased through money from the city, according to Spears and Selvage. The truck will total near $1 million in value with the equipment AFD already owns that were purchased through grants over the last four years.

An inflatable boat is among the newest additions to the department, purchased through a Marathon Community grant. The boat came in Wednesday and will be added to the rescue truck.

Spears said each compartment on top will be used for a specific specialty, allowing efficiency and accuracy when seeking out equipment on scene. While using the small overpacked engine, the crew would have to dig a bit. Now, everything will have a specific place on the new truck.

The added efficiency and proper storage will not only protect the crew on the truck, but will be remarkably beneficial for the citizens of Ashland and surrounding areas.

The new truck has all the men in the cab facing forward, so they can assess the situation as they arrive. The old engine had those in that back riding with their backs to the scene, which wasn’t ideal. Forward-facing seats is one of the customizations.

Rescue crew members are responsible for specialty calls, but aren’t staying behind on a regular structure fire calls. The truck and it’s crew are dedicated to search and rescue..

AFD has always searched the building on a structure fire, but with the rescue program, the three guys on the truck that day are dedicated to search and rescue. They can begin searching while the engines work to connect the hoses to fight the fire.

“Whenever we get on scene of a structure fire, their primary role is to search the house for victims,” said Spears. “Even if they tell us it’s not occupied we still check it, because we have a lot of homeless people living in houses now. We’re going in and finding people in these houses that are supposed to be vacant.”

The crew handles forcible entry and stabilizing cars at accident scenes. The crew is trained to break a lock rather than a door and do as little damage as possible.

The goal is to be able to lock the door back when they leave the scene, Spears explained.

Vehicle stabilization is important so a victim doesn’t get rocked inside, especially if they have a head, neck or spinal injury.

AFD is proud of its role in the community to provide the specialty services. One common call is elevator rescues, which occurs multiple times in a week throughout the city’s high-rise buildings.

“We didn’t realize, really, until we started the program that we had some holes we weren’t filling well,” Spears said. “Now that we got the rescue program going, we’re doing a lot better for the citizens.”

Spears added if something out of the ordinary comes up, the AFD has tried to diversify its extra training so they know how to handle the situation. He also emphasized the value of efficiency and effectiveness for the crew and citizens.

Having all of the possible needed equipment on scene immediately, “is a game-changer for the people that’s stuck,” Spears said.

Much of the equipment was on the old engine, but the department has three trailers with equipment. Centralized equipment with a crew is going increase efficiency and “survivability” for the citizens of Ashland, said Spears.

The city of Ashland is the biggest beneficiary, but the crew responds to assist other departments within an hour of the city. They are proud to be called in to help other jurisdictions and have no qualms against traveling out of Ashland.

The rescue crew has been called in to help Catlettsburg and Summit-Ironville Fire Departments in Boyd County. They recently assisted a call across the river in Ohio when a tanker truck turned over near the river, though they typically stay within state lines.

AFD will soon get a new engine as well to replace a 1993 model currently being operated. These two new trucks will make the frontline fleet the youngest it has been in decades.

Rescue equipment will be transferred to the new truck and the 2007 engine that was operating as the rescue truck will go back to being an engine. The 2007 model will work in place of the 28-year-old truck until the newest engine arrives. The 2007 model will then be retired to reserves.

Spears said it’s the first time in his career there has been an engine under 20 years old retired to reserves from AFD.

The new engine will be purchased through the Assistance to Firefighters Grant of $409,000 and a city match of approximately $200,000.

Ashland Fire will hold a wetting ceremony, per tradition for the new rescue truck Monday at 5 p.m at the Central Fire Station on Carter Avenue. Firefighters will spray the truck down with water and firefighters will towel it dry. It will be backed into the firehouse and officially put into service Monday evening.