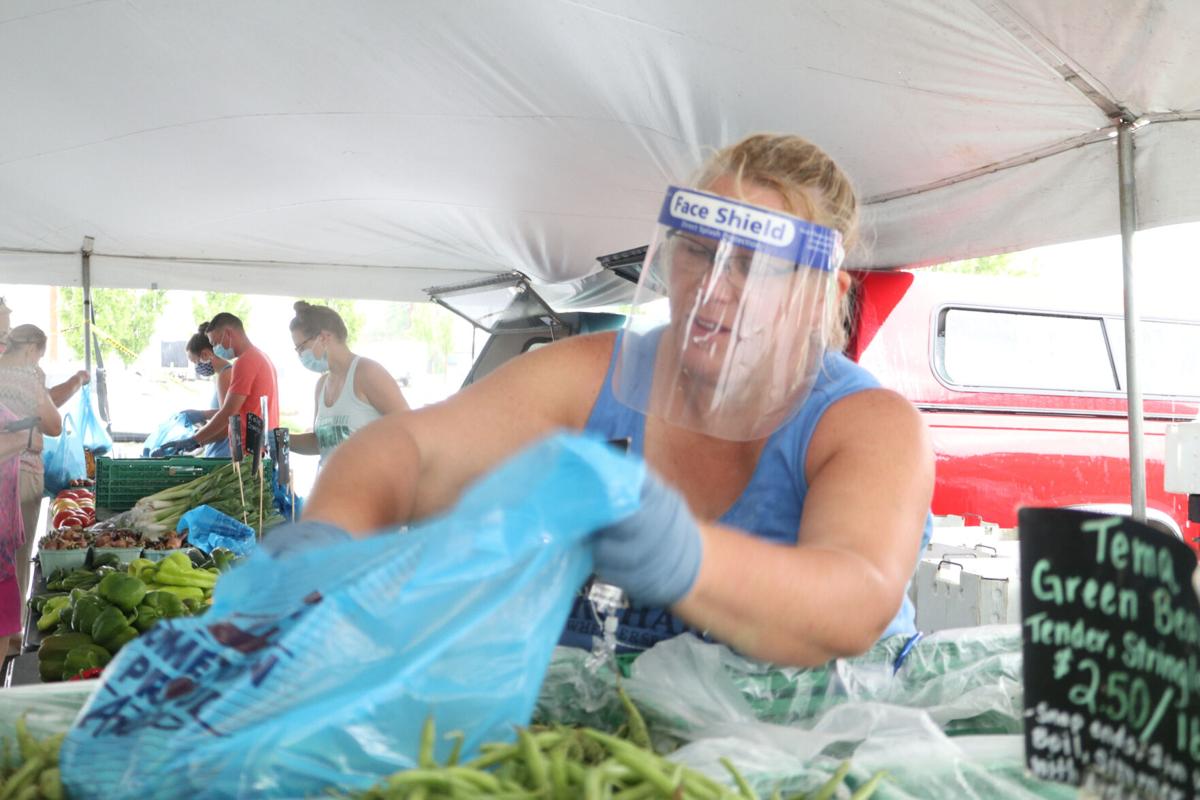 Matt Jones | The Daily Independent Leanne Furhmann loads tema beans into a bag for a customer at the Boyd County Farmers’ Market on Wednesday in Ashland. 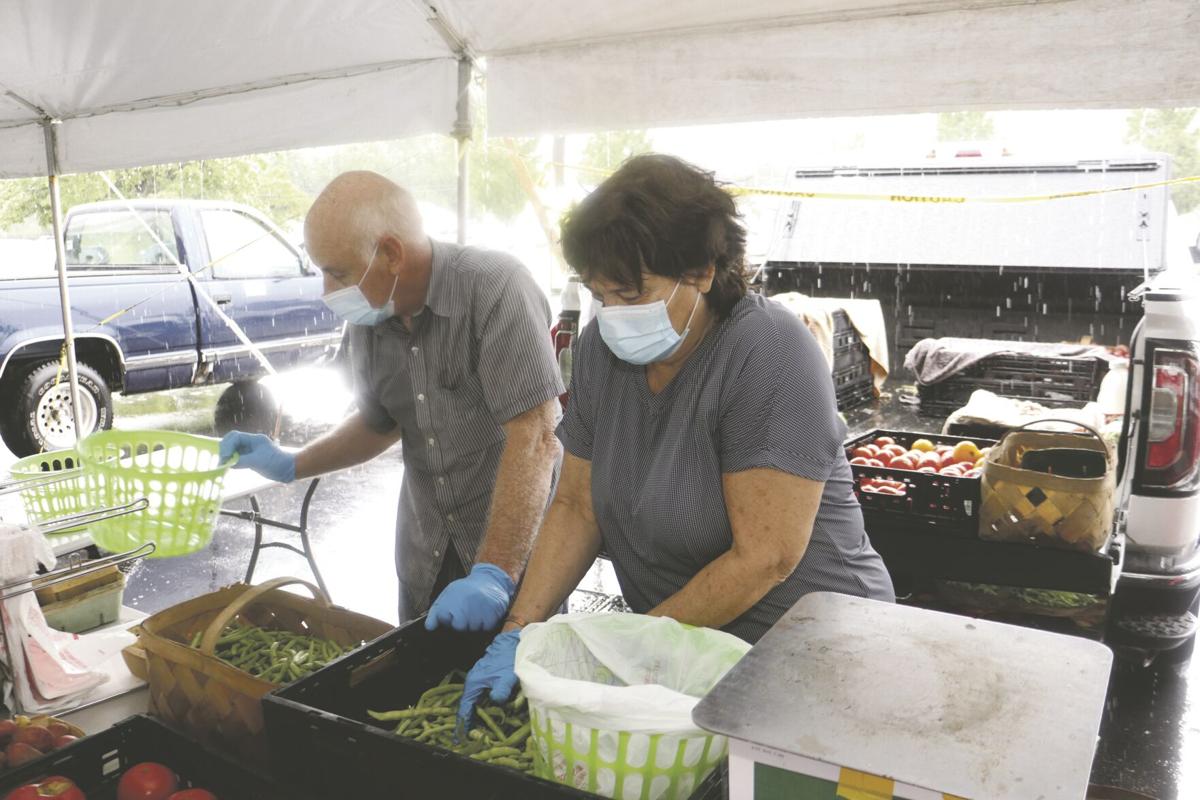 Matt Jones | The Daily Independent John and Carolas Hieneman of Hieneman Farm load runner beans into bags for customers at the Boyd County Farmers’ Market in Ashland on Wednesday. 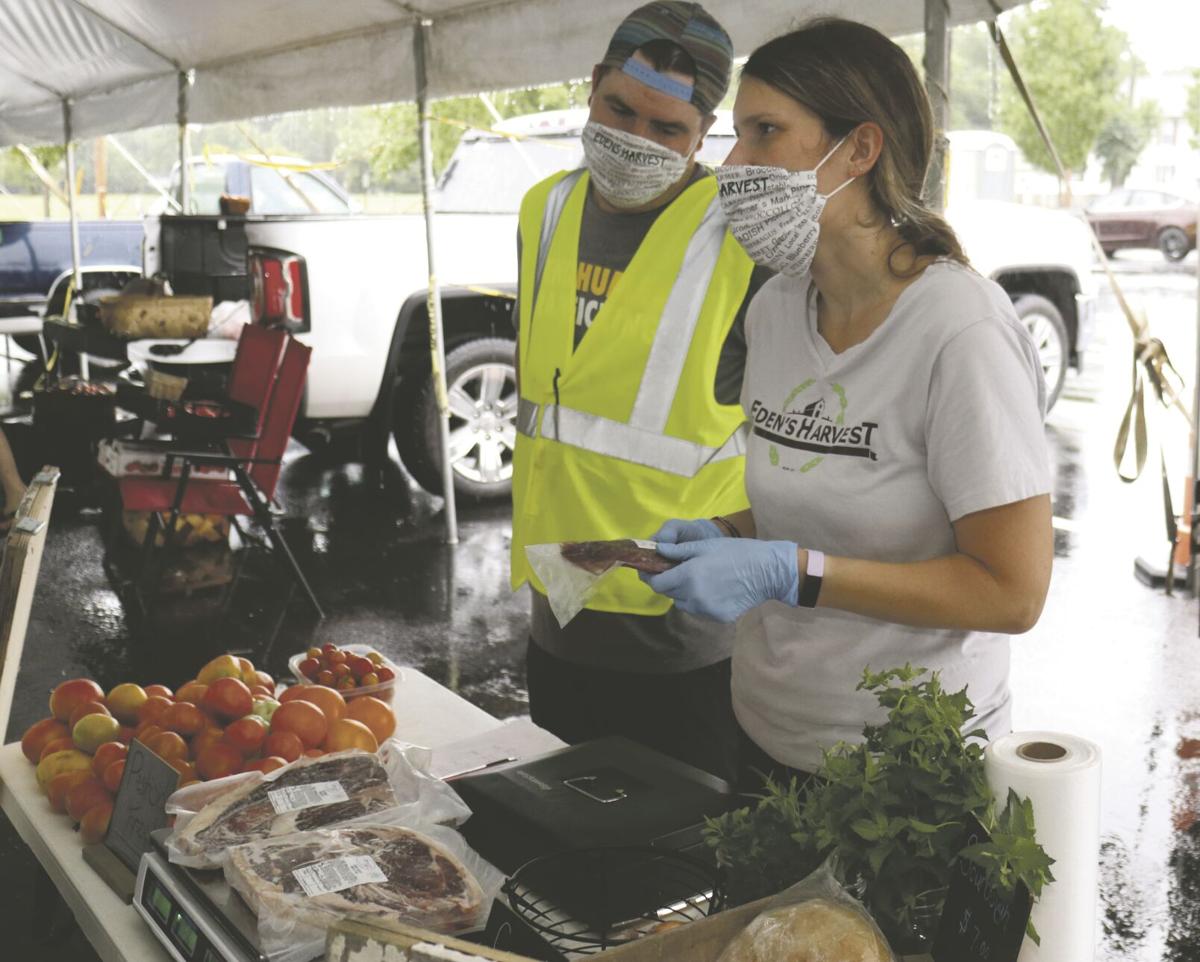 Matt Jones | The Daily Independent Joe and Janell Blair of Edens Harvest show off locally raised beef to a customer at the Boyd County Farmers’ Market in Ashland on Wednesday.

Matt Jones | The Daily Independent Leanne Furhmann loads tema beans into a bag for a customer at the Boyd County Farmers’ Market on Wednesday in Ashland.

Matt Jones | The Daily Independent John and Carolas Hieneman of Hieneman Farm load runner beans into bags for customers at the Boyd County Farmers’ Market in Ashland on Wednesday.

Matt Jones | The Daily Independent Joe and Janell Blair of Edens Harvest show off locally raised beef to a customer at the Boyd County Farmers’ Market in Ashland on Wednesday.

The Boyd County Farmers' Market on 24th Street and Bath Avenue was open on Thursday, and patrons were able to shop beneath the big canopy while summer rain fell around it.

The patrons were undeterred by the weather, and the growers themselves were thankful for it. The area has endured high temperatures and humidity for weeks, but only an indifferent amount of rainfall that slowed the growth of vegetables. In spite of these challenges, there was a wide assortment of fresh vegetables available for purchase — and a long line to buy them — when the market opened at 2 p.m.

David Martin, of Greenup, was ready for customers, offering potatoes and tomatoes.

“I’m out of green beans for a while,” Martin said. “But I hope to have some by next week.”

Martin said that he sets up every Thursday in Ashland and sets up on Saturdays at the Kyova Mall. Martin has been growing produce for about 40 years, and is well acquainted with the challenges, but he says that he really enjoys farming.

“There’s nothing like produce that’s fresh and has been picked the same day or the day before,” Martin said. “If you buy from a store, it’s not as fresh because it might have been picked a long time ago.”

Martin also said produce bought from farmers' markets are safer for the consumer. Local farmers, he said, typically don’t have to spray (pesticides) as often as larger corporations that farm and ship in bulk.

That, combined with really knowing the exact area your vegetables came from, is a major plus. And Martin said that is something he and his customers prefer.

John and Carolas Hieneman, also from Greenup, said fresh vegetables are part of life in our area. John had been farming and selling produce for decades, and for Thursday’s market he brought green beans, tomatoes, potatoes and cabbage, as well as squash and zucchini. The Hienemans also brought corn, which they referred to as short corn. “We haven’t had a lot of rain,” Caroline Hieneman explained. “That’s why the ears are shorter.”

Carolas Hieneman said that they usually set up at the Kyova Mall location on Wednesdays and Saturday, but lately they have been short of vendors on Wednesday, so they decided to come to the Ashland location this Thursday. Everything the Hienemans brought to the market was homegrown on their farm in Hungry Hollow in Greenup County, Hieneman said.

“To be part of this market you have to grow it yourself on your own farm,” she said. That, Carolas said, was what made the produce eligible to be part of Kentucky Proud.

“The main thing is the taste,” Carolas Hieneman said. “You can’t get the homegrown taste anywhere else except homegrown. Everything here is fresh-picked. And if you go to a large store you don’t really know how old it is. The freshness and the taste make all the difference. You can’t get that anywhere else.”

Some growers came a good distance to be part of the Boyd County Farmer’s Market. Lewis Bodimer is a grower who came from Gallipolis, Ohio, to bring fresh produce for patrons to purchase. Bodimer and his sister Charla Bodimer loaded down tables with fresh potatoes, tomatoes, peppers, cantaloupes and onions, and are at the market every Thursday and Saturday.

“There is a lot of effort involved,” Lewis Bodimer said. “You work pretty much from December all the way through November to have one season. And before December, you spend your time cleaning up from last season. It’s a job that is definitely seven days a week; all day, every day.”

Bodimer said that he grows almost every type of vegetable you could think of from corn to zucchini, and chances are if you don’t see it on his table, he can bring it to you the next time the market is open. Every vegetable, he said, is guaranteed fresh and delicious.

All the vendors who bring their crops to markets like the Boyd County Farmer’s Market are hard-working small business owners, whether that business occupies them full-time or part-time. Supporting farmer’s markets in a very real way supports individuals, families, and is an excellent means of both feeding your own families and reinvesting in the families that make up local communities.