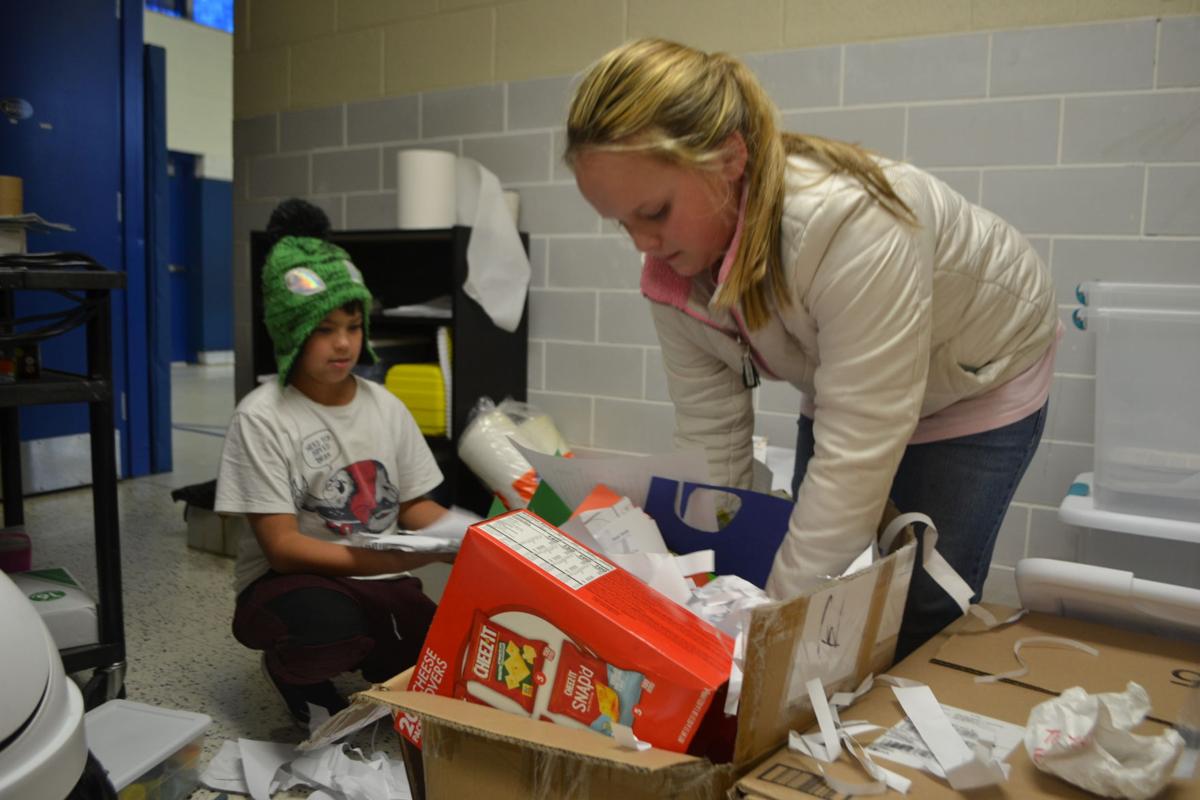 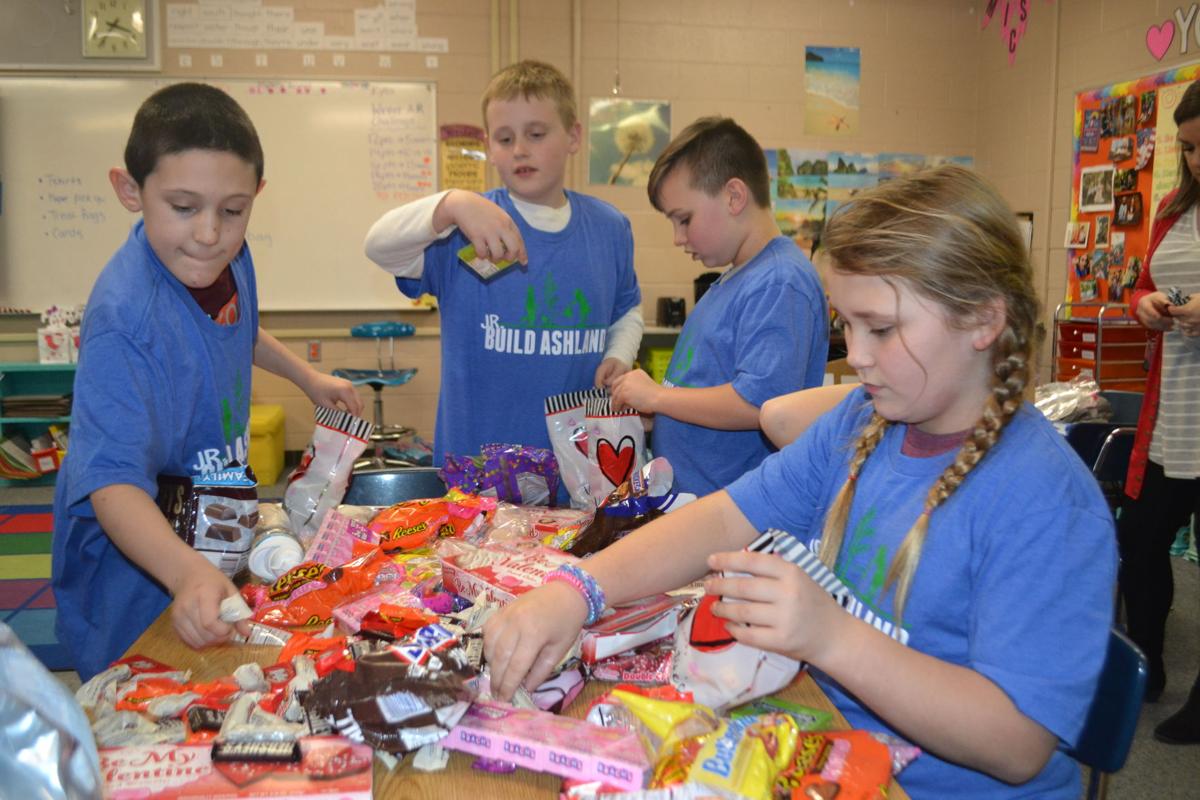 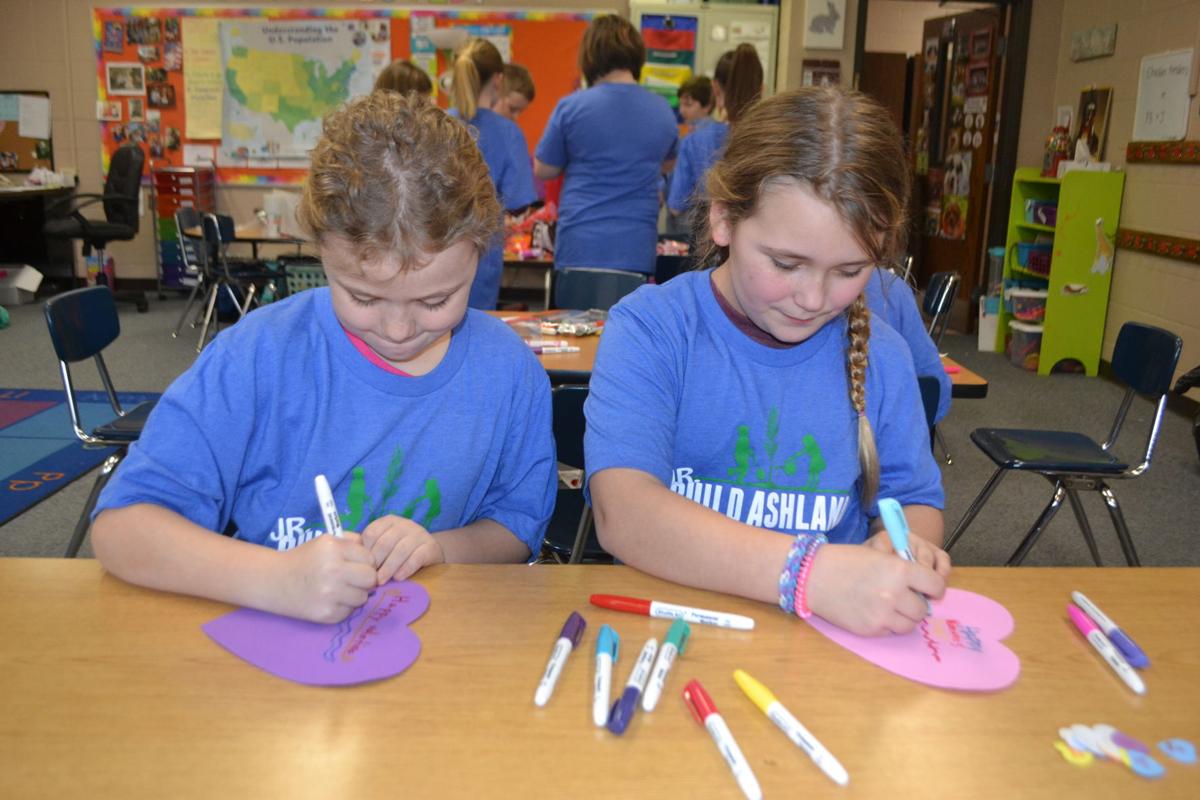 Making valentines at Hager are Lexi Reeves, left, and Cayson Moore, both fourth-graders.

Making valentines at Hager are Lexi Reeves, left, and Cayson Moore, both fourth-graders.

ASHLAND Once a week, teams of kids fan out after school at Poage and Hager elementaries, gathering trash from around the buildings and consolidating it for recycling.

The task requires them to stop in each classroom and office, load the trash onto a cart and wheel it to a central location where they stuff it into large boxes that later will be taken to a recycling drop-off point.

It sounds like a big job, and it is. But they are just getting started.

Each week they take on another project. It could be pulling weeds on school grounds, making cards for veterans or taking snacks to firefighters.

The children belong to an after-school group called Junior Build Ashland. It is modeled after Build Ashland, the grass-roots community service group that for several years now has been mowing, raking, cleaning and otherwise sprucing up neighborhoods around town.

Poage started its club in the fall and the Hager group has been active about a month.

The children have discovered the deep satisfaction that comes with selfless service and with knowing their work improves their school for everyone.

They also have discovered that helping is fun.

"At first it sounds a little boring, but actually it's so fun," said Poage fourth-grader Addison Ramey in between stuffing handfuls of wastepaper into a plastic bin. "And I feel like it's helping out at school."

“They’re amazing. There is nothing better than seeing young kids becoming aware of their surroundings and investing in their community. Nothing but good can come from that,” said Build Ashland founder Dave Daniel. Build Ashland has cheered on the children since they formed their group, supplying them with T-shirts and tips for community service, he said.

Faculty sponsors say the children have shown a high level of empathy and consideration. “They're surprisingly concerned about older people . . . and they don't put each other down. They build on each other's work,” said Poage sponsor Emily Wells.

“I think they love to help. They know when it's a Build Ashland day. They're always excited. When they see me in the hall, they say, tell us when we need to do something,” Hager sponsor Sayles Kirby said.

What they were doing Tuesday was making valentines and bags of candy for shut-ins. A local church will collect the valentines and goodies and distribute them.

“I think it helps the world to clean up, and for people in the hospital it helps them feel better,” said Hager fourth-grader Lexi Reeves.

Both groups are planning spring projects. At Poage, it is likely to be a walking track around the grounds. They made the choice because it can be used by the school and community, Wells said. The Hager kids have not made a firm choice yet.