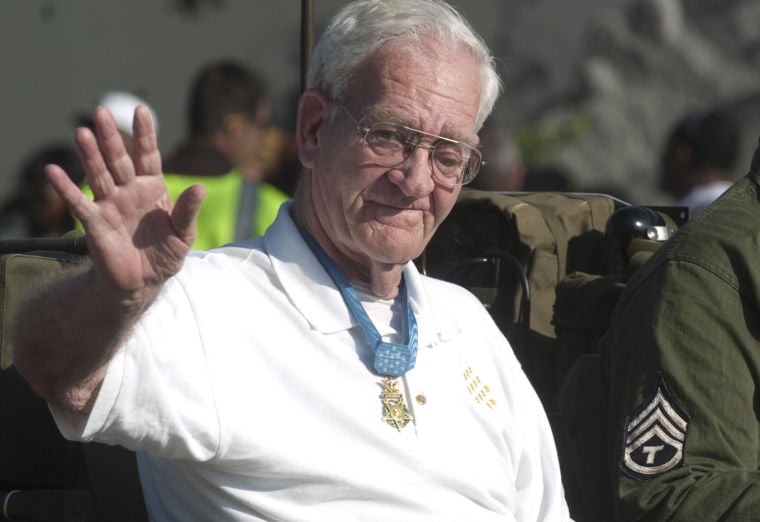 Ernie West waves along the Pegasus Parade route in Louisville Thursday as one of four Medal of Honor recipients to be named Grand Marshals. 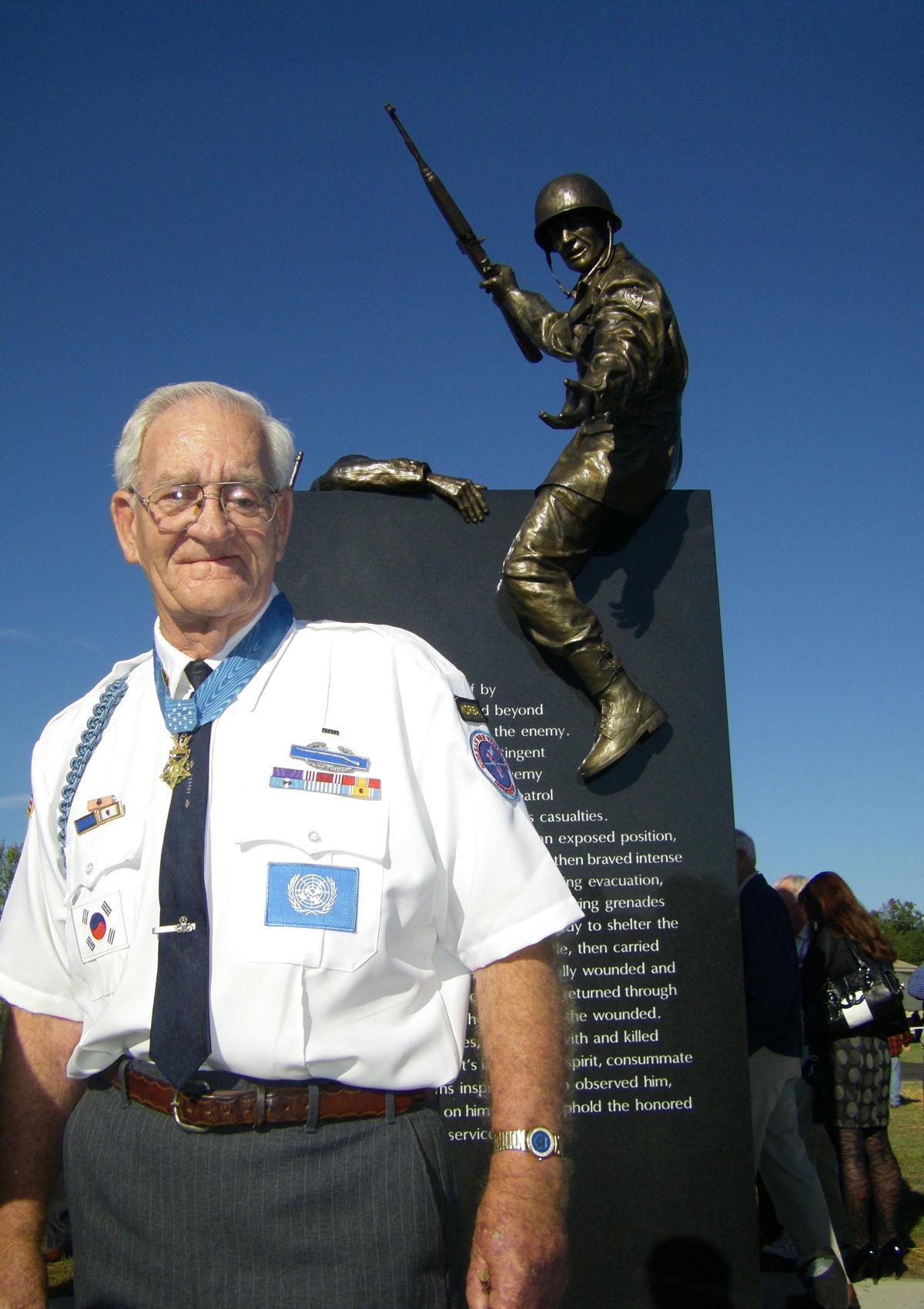 The public is invited to help celebrate Congressional Medal of Honor Day today at the Wurtland Volunteer Fire Department at 10 a.m. Medal of Honor recipient Ernie West will be the guest of honor. Matt Potter will be guest speaker. PHOTO BY TOM CLAY 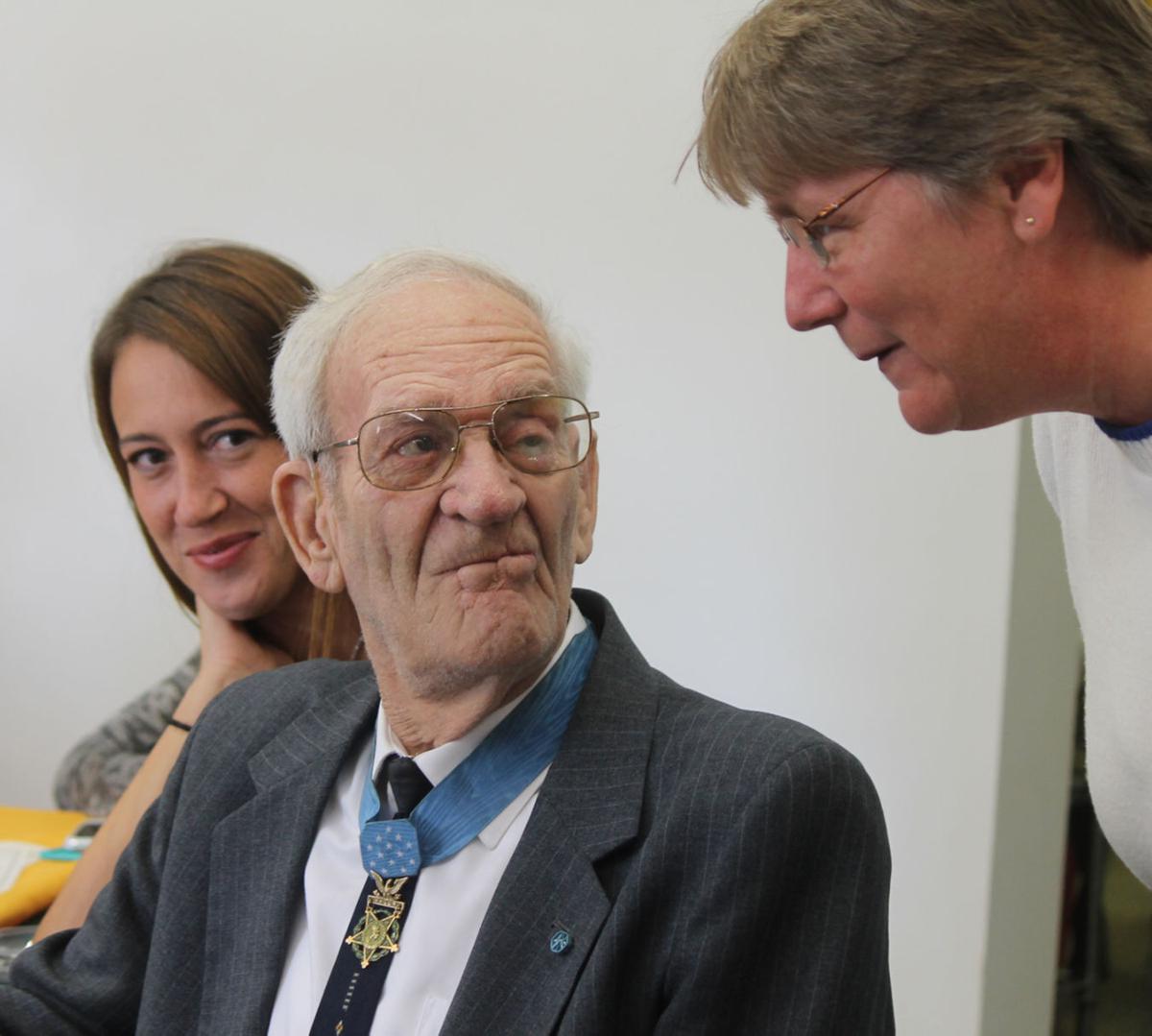 Ernie West waves along the Pegasus Parade route in Louisville Thursday as one of four Medal of Honor recipients to be named Grand Marshals.

The public is invited to help celebrate Congressional Medal of Honor Day today at the Wurtland Volunteer Fire Department at 10 a.m. Medal of Honor recipient Ernie West will be the guest of honor. Matt Potter will be guest speaker. PHOTO BY TOM CLAY

A young boy came home one day to find his father talking to a man he did not know. His father’s companion was rather ordinary, the young boy remembered, and appeared to be just like any of his neighbors he saw on a daily basis. But the father spoke up and said, “Do you know this man? He’s a war hero.” Those words changed the young boy’s opinion of the man, and he became fascinated with learning the man’s story. But the man just smiled and quickly changed the subject, asking the young boy instead where he liked to fish.

The young boy was Tom Clay, of Greenup, and the man his father (well-known writer and community activist Soc Clay) introduced him to was Ernest “Ernie” West. Clay remembers West as being a plain-speaking and easygoing man, and not at all what one might expect from a war hero. Clay said you’d expect a war hero to be larger than life, big and bold, but West wasn’t any of those things.

“He was just a normal guy,” Clay said. “One of the neighbors who really liked to fish.” But even though West has hesitant to speak of it, Clay would later learn that West was not only a hero, but also a hero to whom other heroes looked as the very definition of the word. West died on Saturday at age 89.

The man man who talked so readily about fishing at the Clay home was a Greenup County native himself. He was born on Sept. 2, 1931 in Russell and raised in an orphanage at the Methodist Children's Home in Versailles. West lived in Wurtland and worked on what is now CSX Railroad. He was drafted in 1950, and in October 1952 he was serving as private first class with Company L, 14th Infantry Regiment, 25th Infantry Division in Korea. During a patrol, West’s unit was ambushed and took heavy casualties.

Unit commander Captain George Gividen was seriously wounded, and West ordered those not wounded to retreat from the enemy’s larger force. West himself, however, didn’t retreat, but instead repeatedly faced a hailstorm of enemy fire and grenades to rescue the wounded members of his unit and carry them to safety. And in numerous cases, West faced not only area fire but personal attacks as well while rescuing his comrades. At one point, West was carrying his commander, while returning fire with both his own and his commander’s weapon. And though he said he wasn’t aware of when it happened, West became one of the walking wounded himself, sustaining wounds that would cost him an eye. But, in typical fashion, when people referred to him as a hero, West simply responded, “They were all my brothers. Any of us would have done it because you don’t leave your brothers behind.”

For his actions on that day, West received numerous medals, chiefly the Medal of Honor, which was presented by President Dwight D. Eisenhower. Again, true to form, West said, “I turned it down at first. I thought everybody deserved a medal.” But he did accept the medal on Jan. 29, 1954, though he was still reluctant to speak much of his time at war. And it was obvious that West desired first and foremost to return home and continue with his life. Fortunately for West, he was able to do just that, by marrying and starting a family, and even returned to his job at the railroad.

“He was one great man,” said AMV Commander Lori Grizzle, a friend who worked with West at the railroad. “Our post is named after him, and there are memorials to him at the post.”

But as much as West the hero, Grizzle says she misses her friend.

“He was just such a nice person,” she said. “He was funny and nice to be around. And he was always pleasant to everyone.”

Grizzle said West didn’t really want to talk about himself, and while she and her husband worked with him on the railroad, he was very humble and didn’t talk about his service.

“But his wife persuaded him to talk to schools because she thought that kids needed to know. And he was always great about speaking to the kids about what it takes sometimes to keep our country safe. It was the last thing he wanted to talk about,” Grizzle said. “But she convinced him, and he never hesitated then to speak to the kids. He will be dearly missed.”

West also was immortalized in a painting that now hangs in the Greenup County Courthouse. A committee comprised of Soc Clay, Tom Crump and Emily Cantrell Stephenson commissioned a painting from Greenup High School art teacher Brian Moser, and then sold prints of the painting signed by West, with the proceeds going toward a scholarship for seniors at Greenup County, Raceland, and Russell. The scholarship will continue, and Clay said that it has quite a large impact on the students.

The official citation of West’s Medal of Honor reads:

“Pfc. West distinguished himself by conspicuous gallantry above and beyond the call of duty in action against the enemy. He voluntarily accompanied a contingent to locate and destroy a reported enemy outpost. Nearing the objective, the patrol was ambushed and suffered numerous casualties. Observing his wounded leader lying in an exposed position, Pfc. West ordered the troops to withdraw, then braved intense fire to reach and assist him.

While attempting evacuation, he was attacked by three hostile soldiers employing grenades and small-arms fire. Quickly shifting his body to shelter the officer, he killed the assailants with his rifle, then carried the helpless man to safety. He was critically wounded and lost an eye in this action, but courageously returned through withering fire and bursting shells to assist the wounded. While evacuating two comrades, he closed with and killed three more of the foe. Pfc. West's indomitable spirit, consummate valor, and intrepid actions inspired all who observed him, reflect the highest credit on himself, and uphold the honored traditions of the military service.”

Ernest “Ernie” Edison West is a shining example of how a common man can rise to the occasion and do uncommon things. His life both on active military duty and as a retired veteran is a testament of dedication to the community and country he loved. West passed from this life Sat., May 1, 2021, at the age of 89. But he will live on in the memory of a grateful community and thankful country.