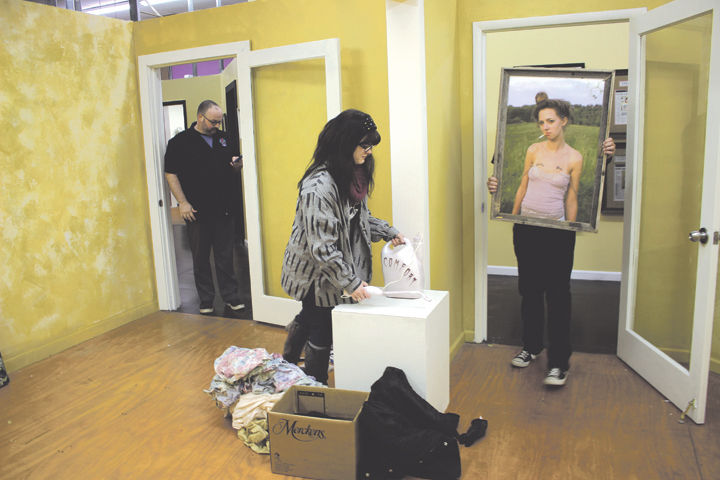 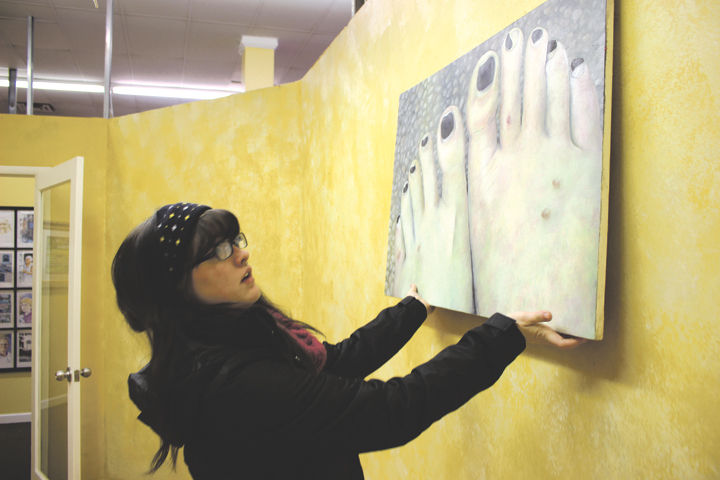 Artist Rosemary Howell hanging a painting at the Arts Council of Northeast Kentucky’s new gallery inside the Pendleton Art Center in downtown Ashland as part of an exhibit featuring her works along with art by photographer Kelsey Dillow and artist Hannah Carter. Tim Preston / The Independent

Artist Rosemary Howell hanging a painting at the Arts Council of Northeast Kentucky’s new gallery inside the Pendleton Art Center in downtown Ashland as part of an exhibit featuring her works along with art by photographer Kelsey Dillow and artist Hannah Carter. Tim Preston / The Independent

ASHLAND The next artists whose works will be on exhibit at the Arts Council of Northeast Kentucky gallery at the Pendleton Art Center, have long had strong impressions with the organization’s art-teacher president, who cites their differences among the reasons for excitement about the upcoming show.

“Hannah is conservative and Rosemary is more of a liberal,” said the artist and teacher known as Mr. Jeremy Grizzle, who now heads up the arts council, speaking of artists Hannah Carter and Rosemary Howell.

Both artists are Russell High School graduates, Grizzle said, and both made strong impressions upon him as they began to express themselves through art.

Carter, now a student at Berea, specializes in paint and multimedia, he said.

“She’s only showing two pieces,” Grizzle said, describing Carter’s works as “usually personal in nature,” and depicting “things that relate to her directly.”

Howell, he said, is now a student majoring in art at Ohio University in Athens, focusing on multimedia and ceramics.

“It is more photorealstic in nature and she, as with Hannah, often deals with personal female issues,” Grizzle said, explaining Howell’s paintings are based on photos she has taken of herself and magnified. “For example, she took a picture of a mosquito bite and blew it up like 20 times.”

Her ceramic works, he said, tend to be “a little bit more sculptural” than those of other artists.

For the new exhibit, Howell also brought at least one large image by photographer and friend Kelsey Dillow.

“You always have students who stand out,” he said before meeting Howell at the gallery to hang paintings and display her other pieces. As the former student and teacher enjoyed the working reunion, each had adjustments to make.

“You don’t have to call me Mr. Grizzle, Lakin,” he said, prompting her to note, “At school, I go by Rosemary now.”

Dillow, Carter and Howell’s works will be on display in the gallery  starting today, available for viewing or purchase between 10 a.m. and 6 p.m. Monday through Friday.

Grizzle emphasized the gallery is open to any local artist, and asks anyone who wants their work to be to be considered for a future exhibition to contact him by email at acofneky@gmail.com, or by calling (606) 922-1731.

TIM PRESTON can be reached at tpreston@dailyindependent.com.