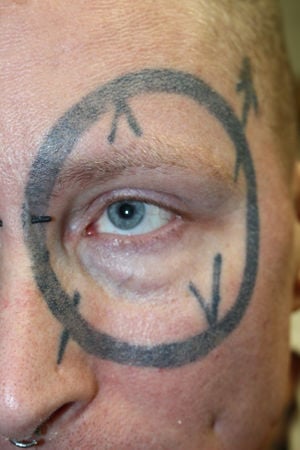 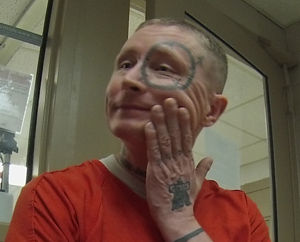 Joe Waugh reacts to a question from reporter Tim Preston during a jailhouse interview on Friday in Catlettsburg. TIM PRESTON / The Independent 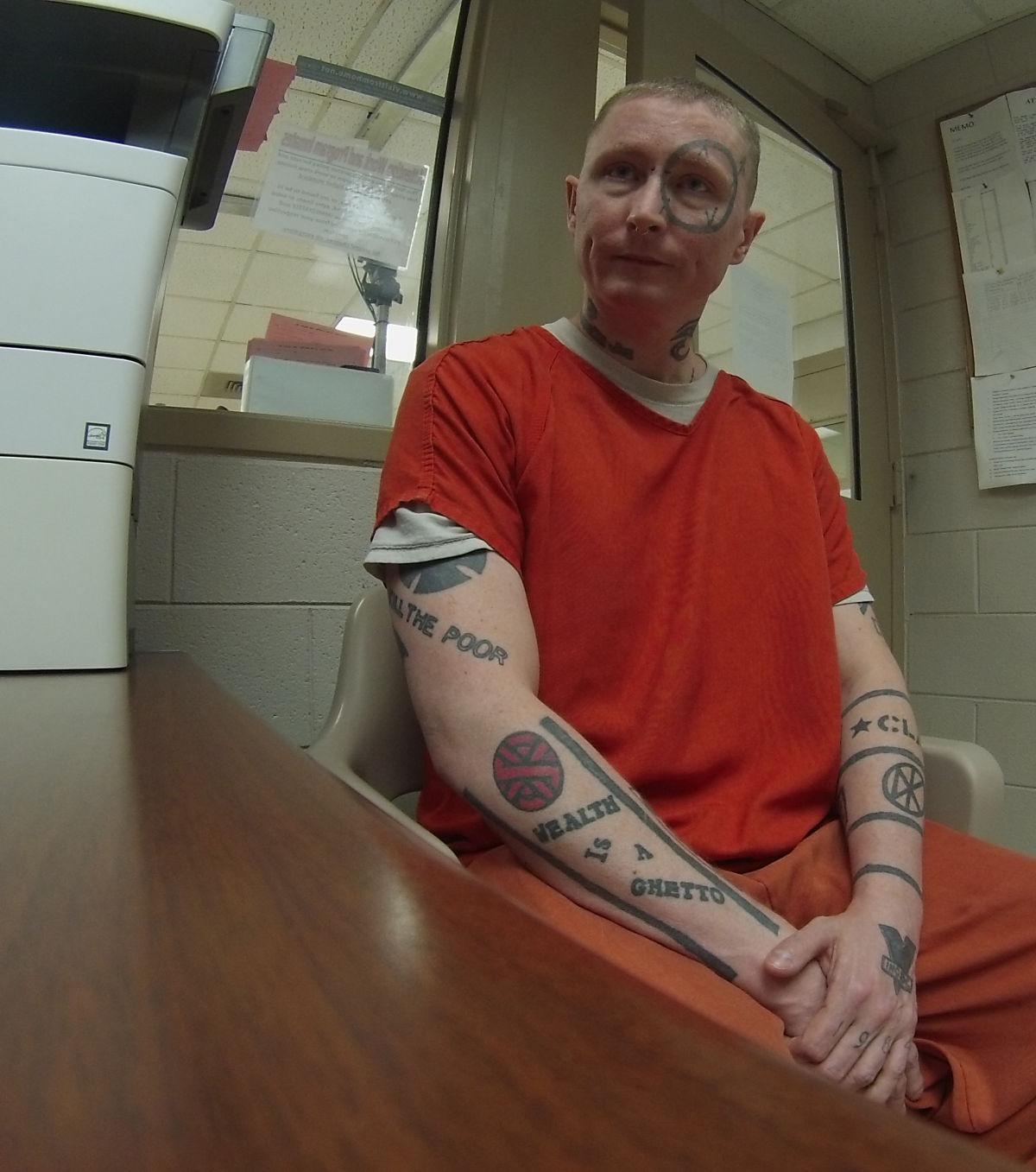 Joe Waugh reacts to a question from reporter Tim Preston during a jailhouse interview on Friday in Catlettsburg. TIM PRESTON / The Independent

CATLETTSBURG Joe Waugh’s appearance causes an instant and visceral reaction within practically all who look at him.

Even without the signature, dyed mohawk that distinguished him from far away, Waugh remains instantly recognizable due to a facial tattoo, a circle around his left eye, that causes many to look upon him with utter revulsion. Sitting in the Boyd County Detention Center for the past year, Waugh shakes his head and confesses his confusion when he talks about being labeled a terrorist.

Waugh, along with Jessica Greer, were indicted for blowing up “Malotov cocktails” in a CSX train tunnel near Hillcrest Apartments in July. Each was charged with use of weapons of mass destruction, wanton endangerment and criminal trespassing, and face five to 10 years in prison if convicted. The criminal investigation was prompted by a video posted on Greer’s Facebook page allegedly depicting Waugh and Greer at the scene as the devices were detonated.

As a self-described anarchist, Waugh said his political views were immediately intertwined with his charges, even though he denies ever making a statement about being an anarchist to any arresting officer. During an exclusive interview with The Independent last week, Waugh said the past year has been difficult.

“My daughter graduated high school while I was in here. That was kind of bittersweet,” adding jailer Joe Burchett allowed her to visit him wearing her cap and gown.

Waugh spent nearly an hour discussing his situation, although he declined to discuss specifics of his case in consideration of an impending court date. He began by tackling the first question many ask regarding his appearance, and the story behind the tattoo on his face.

Q: Do you regret that particular tattoo?

“I’d be lying if I said I didn’t. There’s some regrets I have. At the same time, its almost like a scar on me. I mean, it’s part of me. I try not to regret too much about decisions I make. But, everybody’s got regrets I think ... Especially talking to somebody for the first time — appearance. You can’t get a first appearance again with someone when they meet you, especially around here in this area. In this area, I think I’m the only person with a big tattoo on their eye.”

Waugh said his other tattoos are “mostly old school punk rock” words and images, along with “some political type tattoos” that are often misinterpreted.

“This one right here I get a lot of slack for it,” he said, pointing out the ‘Kill the Poor’ slogan on his arm and explaining it is a statement from the Vietnam  War about poor kids being drafted instead of rich kids.

Waugh said he grew up near Columbus, Ohio in a “slightly dysfunctional” family.

“I was raised really strict Pentecostal,” he said, describing the family’s ways as “real crazy strict” with “strict dress” and a goal of being “super normal.” He does not, however, credit or blame his family’s religious practices for his anarchist views.

Q: Can you talk about why you’re in jail?

“In my view,how I see it, I think that if I were a normal-looking person, none of this would’ve happened. It’s a lot of hype. As soon as they heard the word anarchist, which the arresting officer said the first thing I stated was ‘By the way, I’m an anarchist’ —which I’d be a complete and total idiot to say. Nothing like that was ever brought up.

“What we were doing — this is about all I can say. We were making a music video. That’s what it was. We was making a music video — an edited music video with music and everything. Was that maybe in bad taste? Yeah. Was there any damage? No. Was there anybody intended to be hurt? There was no malice intended or anything. And, I think the way I look and with what my  political views, or lack of political views or whatever, it kind of blew up into something it never was.

“What it was — it was so innocent and goofy. When it was put on it was more like, ‘Hey look how cool this looks!’”

Q: Do you expect a fair trial?

“I don’t think there’s no way I can. They labeled me — like one of the newspapers, the top thing said ‘Wannabe terrorists.’ Now see, especially right now with all the terrorist stuff on TV, ISIS and all that crazy stuff like that — they’re putting me up in there like what was that bomber? The Boston Marathon Bomber. With all that going on and them putting ‘terrorist’ with my name, they’re treating me like I’m some kind of anarchist extremist religious nut or something, and that actually has nothing to do with my case.

“That would be like if someone committed a crime — if someone robbed a bank and they said, ‘Yo! He’s a Republican!’ And they’re like ‘Oh OK, he’s a Republican.’ Me being an anarchist ... am I actively doing anything? No. It had nothing to do with it at all. That’s a small part of my views and they’re making it like that’s all I am. And, like I said, it was never brought up when I was arrested,” he said, theorizing police looked at his Facebook page and were already familiar with the anarchist literature and other items he once sold at the shop he ran on 15th Street in downtown Ashland.

“I think I’m misunderstood a lot. You know, if you saw me on the street — the way I dress, the way I look — not very many people stop and talk to you first before they come up with their own, you know, thoughts,” he said recalling a railroad official looking into the case asked him if he was “a real bad person or someone who did something goofy.” Waugh said he replied that he had no bad intention.

“I don’t think there’s no way I should be in jail right now. I mean, I get it. Sometimes people do something with malice toward someone or something like that but I don’t look at it like that. I think it was blown completely out of proportion. There’s a lot of things I want to say but I’m ... I want to say a lot.”

Later, Waugh added “As far as a fair trial, with so much publicity it’s gave me — you know it’s on the news and in the paper a whole lot. In the court of public opinions I’m already found guilty. You know what I mean? Guilty of what? I don’t know exactly what people think, but with these times and all the terrorism and stuff going on — they’re linking me to that kind of stuff and they have no clue I’m, you know, a good dad with two kids and my daughter comes to see me all the time and I’m real close with my kids and everything. I’m the type of guy who when he sees somebody out and  homeless -—I’m the first one that always stops and gives them money, brings them food. I’m real soft-hearted. I’m always there for my kids. I try to be the best dad I can be. I was real involved in my daughter’s schooling.”

He later added, “I thought about trying to get a change of venue. Really, I’m just blown away still. Every time I go to court, where I don’t get to say my own peace or whatever, I have lawyers speaking for me or whatever — I figure this has been done and gone a long time ago. I really do. I mean, I’m in here a year and my life got torn all to hell. And, it’s just I don’t know, it’s crazy.

“They just ain’t going to let go of that whole terrorist thing. It’s a lot more interesting if I’m a terrorist, you know? It’s a lot more interesting that I’ve got a tattoo on my face. If I didn’t have this tattoo on my face and I was just a plain Joe Republican with no tattoos on, I believe I would’ve gone home a long time ago — I would have gone home a long time ago.”

Q: An IED? (In response to someone who described him as “the guy who set off the IED in the train tunnel.”)

“IED? (laughs) I hate being known for that. I’d rather be known as the guy who opened up a shop, Banshees. That’s what I was known for and now ... in a town like Ashland I’m easy news, an easy thing to talk about. I’m the Bogeyman.”

Q: Are you a terrorist?

“No. No,” Waugh said. “I don’t get it. It’s like I said it’s just a bunch of fear-based hype. It’s easy headlines. You know the newspaper the news business, all that stuff. You know, I look the part. You know? I look the part. I couldn’t believe they used the word terrorist. It really shocked me.

“I feel like I’m black in 1960s Mississippi,” he said. “I felt like when it started happening it was kind of like a witch hunt. That’s kind of how it felt. It just kept — every headline, everything just kept getting worse and worse and worse and when I go back to what really happened, I think ‘Gosh, I can’t believe it. Something that goofy as a music video and it went nuts.’ Like, I still can’t believe it. Here I am almost a year later.

“Talking about anarchists. You know, I have a lot of anarchist views, but there’s a lot of views that I have that are the same views as the forefathers — like freedom of the press. I believe in that. I’m a big person on civil rights. But, you know, they act like being an anarchist is this big sin, that it is a sin to be a big anarchist,” he said, citing an Abraham Lincoln anarchist-like quote about people’s obligation to overthrow the government if they grow weary of it.

“When you say the word anarchist, that’s not what people are thinking of. They’re thinking of somebody in a black mask, raising chaos,” he said.

Q: You’re basically like a lot of people, against big government?

“Not necessarily against it, I just don’t agree with a lot of it,” he said.

Waugh concluded, “I make a better bad guy than a good guy even though I’m actually a good guy.”

Martha McCoy passed away July 4. Her funeral service will be Thursday,July 9, at Evans Funeral Home at 1p.m. Burial will follow at McCoy Family Cemetery. Visitation will be Wednesday,July8,from 6 to 8p.m. at the funeral home.